Woodworking as a hobby can often seem very cost prohibitive, but it doesn’t have to be that way. I’ve shared with my readers on more than one occasion that I had to learn one major lesson the hard way — only rich woodworkers can afford to buy cheap tools. Thankfully, with a little thought and some elbow grease, a lot can be< accomplished with a very small tool kit.

Read on to see how you can use a batten to almost eliminate the need for a workbench. 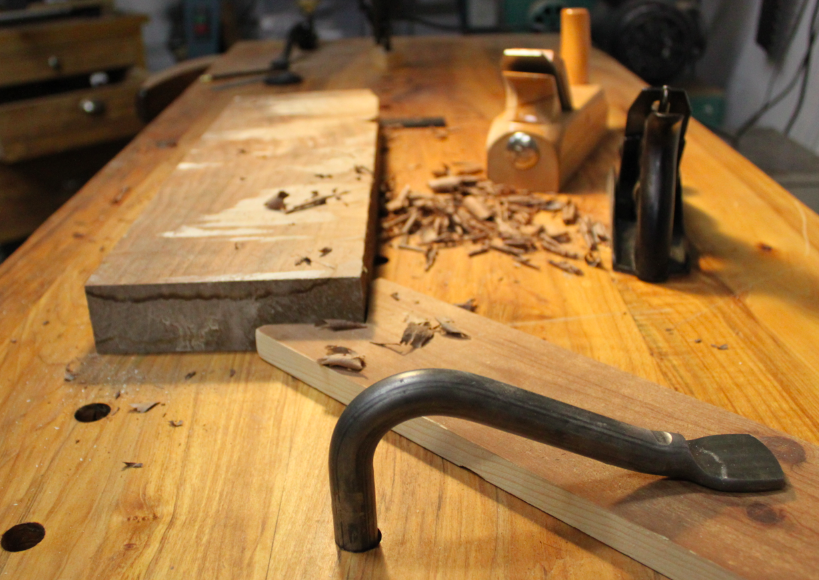 For quite a while, there seems to have been the idea that building one’s own workbench was some sort of a rite of passage for a woodworker. That is a huge, intimidating and potentially expensive project.

Just because you don’t have a workbench doesn’t mean you can’t do woodwork, and I’ve set out to share projects you can do to all but eliminate your need for a proper workbench until you feel confident enough to tackle that project on your own. We’ve about bench hooks and how they use gravity to become great clamps for sawing, chiseling and even, in a pinch, used to “shoot” ends square with a hand plane. Then we went over shooting boards.

In an article I wrote for Lee Valley’s newsletter a while back, I detailed how I was able to build a moxon vise for $17. That vise can be clamped to any table top, instantly turning it into a joinery bench. I don’t think I could stretch the topic of plane stops to be an entire article, so I will touch on their use here, then explain how they can be used with this week’s project, the batten, to almost entirely eliminate the need for an end vise on a workbench. 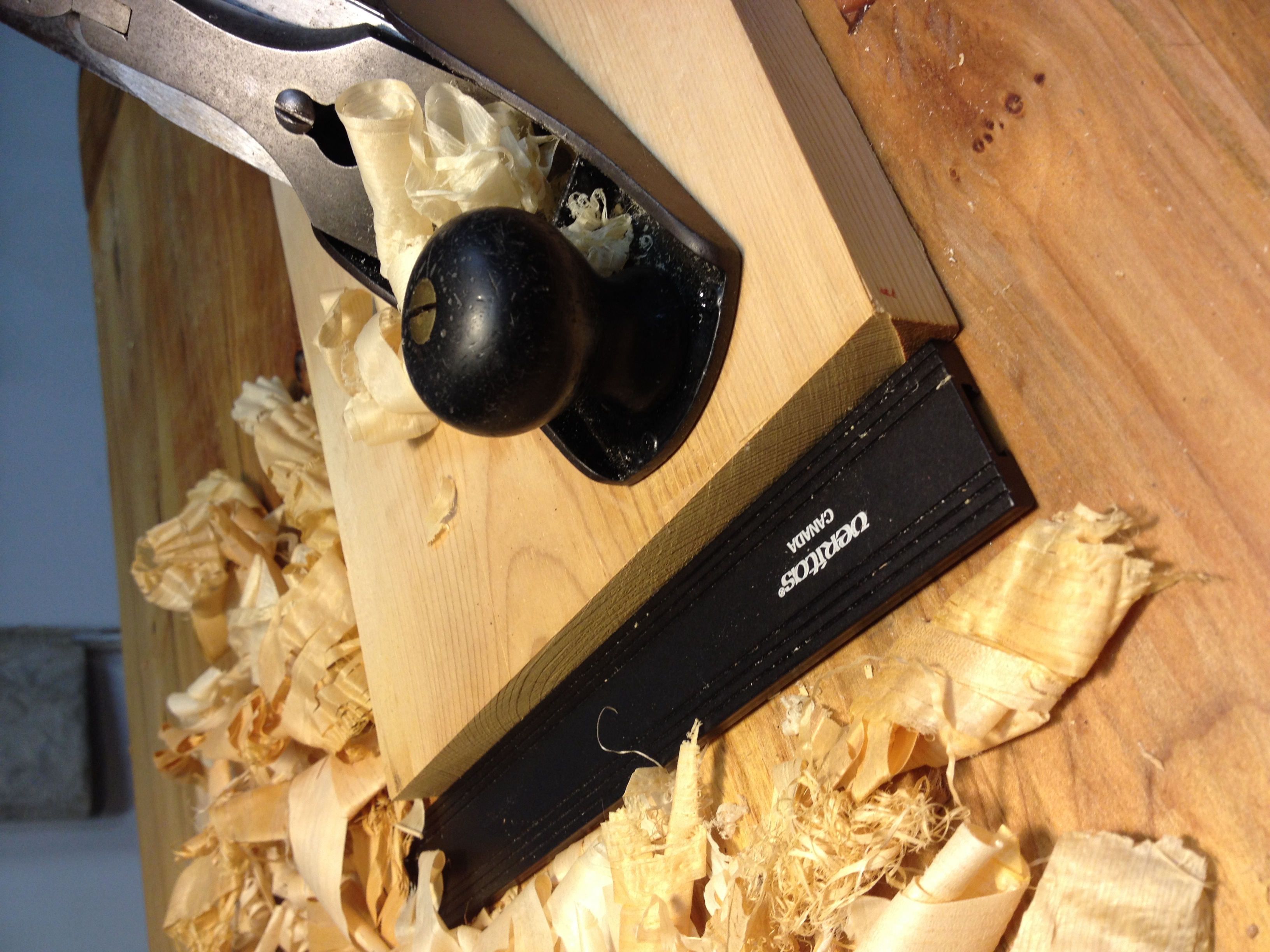 If you are using Western-style hand planes, cutting on the push stroke, you simply need to butt your work against something stationary to hold it still while performing most planing tasks. I did this fairly unsuccessfully using round bench dogs in my workbench for a long time before I saw the new Veritas plane stops Lee Valley is selling. 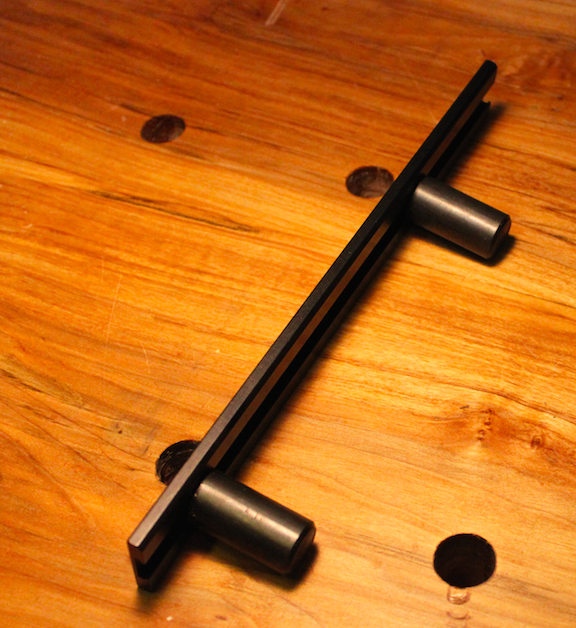 When I first saw them, I thought to myself, I could make that pretty easily by turning (or buying) a 3/4″ dowel, cutting it into two four-inch pieces, and somehow attaching them to a thin board the exact distance between two dog holes in my workbench. But then, with the holiday rush, I knew I wouldn’t have time to do that project for a few months, so I broke down and bought one. And boy am I glad I did! It totally changed my woodworking game. So, right after I started playing with it, I called my friend Jason Thigpen over at Texas Heritage Woodworks. He told me that the plane stop, paired with a batten, would hold work securely for just about any woodworking task. He had been using this setup instead of his tail vise for months. 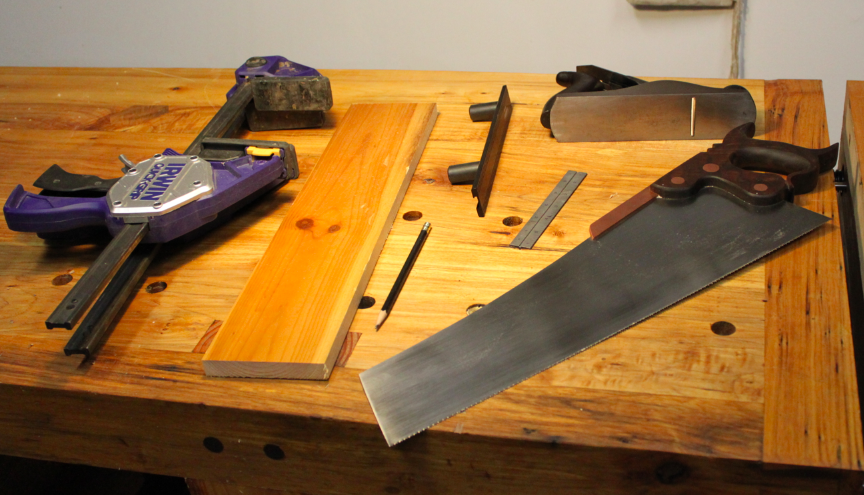 So I decided to set about making a batten for myself. As is my custom when making shop jigs and fixtures, I nosed around my scrap pile for a suitable piece with which to make my batten. Once I had selected a suitable piece, I was ready to design.

2. Lay out your design

If there is a perfect design, a tried and true measurement that makes this tool more effective, I guess I haven’t done enough research to find it. I just made a design that looked like it would work and be a functional and attractive way to use up a scrap piece of lumber.

After I’d marked out my first triangle, I decided it might be more logical to cut the waste at 45- degree angles so if the piece of wood I was holding had a square edge, the edges of the batten would mate with it perfectly. I marked the middle point in the board, measured back a few inches, then marked diagonal lines from which to cut out the triangle of waste which will be used to hold work securely. One thing to note here is that if you mark between 1/2-1″ in from the sides of your board, it will not only be easier to get your saw started into the cut, it will also strengthen the “holding sides” of your batten. 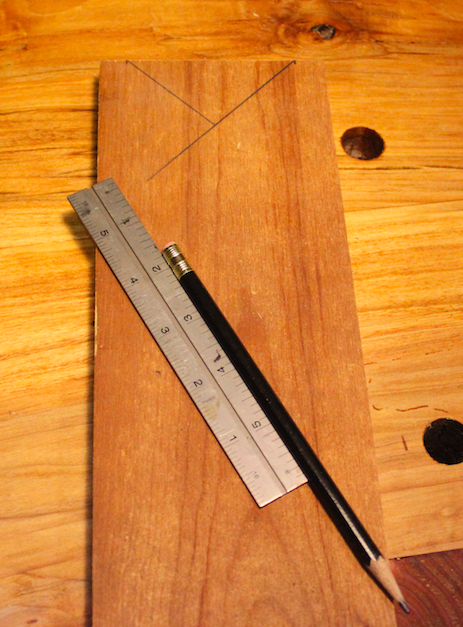 I didn’t see any reason why these cuts had to be super precise, so I set my workpiece square in the vise, started my saw in a square cut, then once my cut was established, I turned my saw at 45 degrees and split my line. I did the same on the other side until the little triangle of waste in the middle broke free. 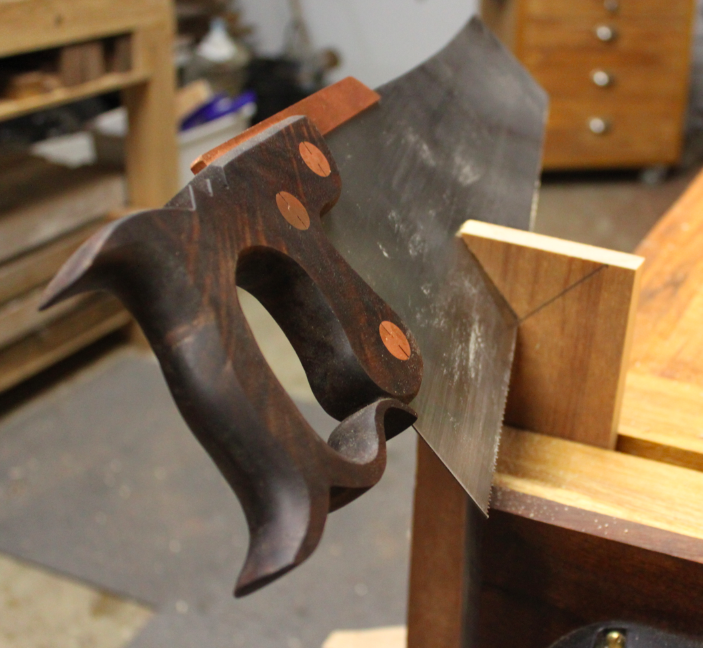 I’m not a big fan of splinters, so I grabbed the nearest sanding sponge and worn out piece of 150 grit sandpaper and sanded away all the little hairs that the saw split out while I was cutting away the waste. 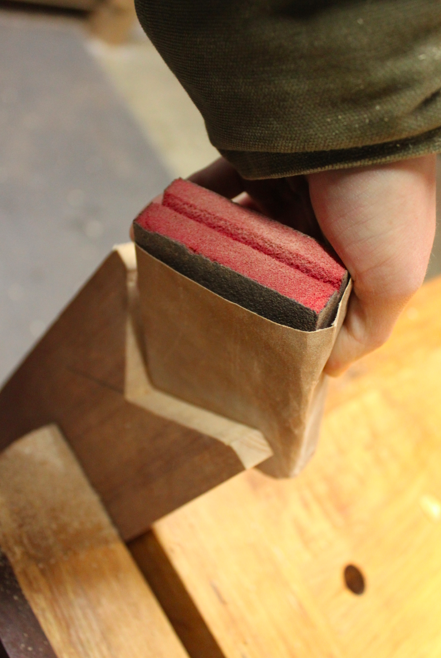 Once it was pretty enough to be acceptable, I pulled it out of the vise, laid it on the bench, and grabbed a scrap piece of lumber to plane, put my plane stop in my bench holes, and grabbed a holdfast to secure my batten against the scrap I wanted to plane. 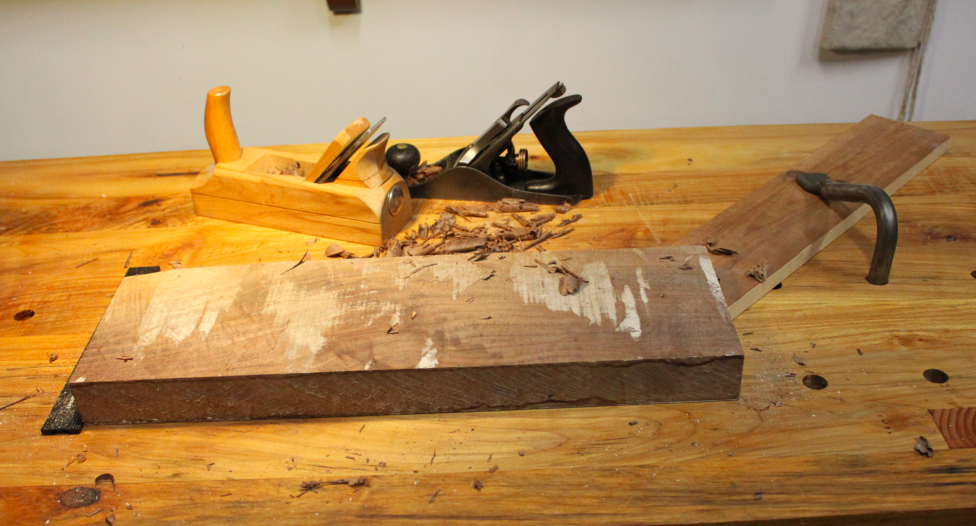 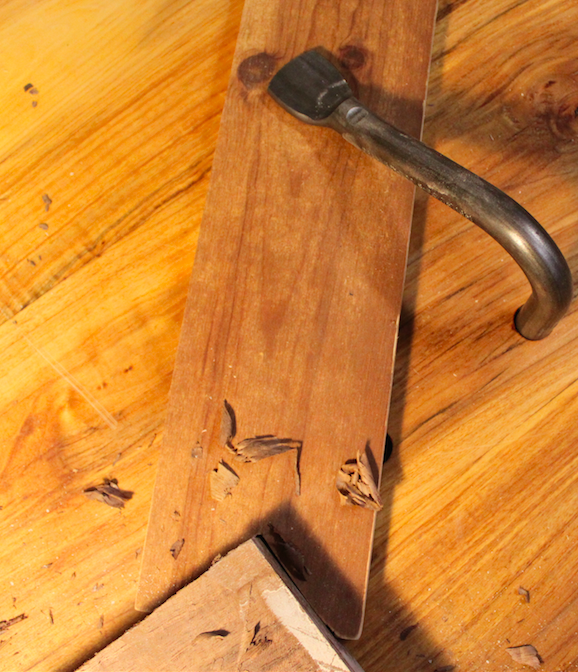 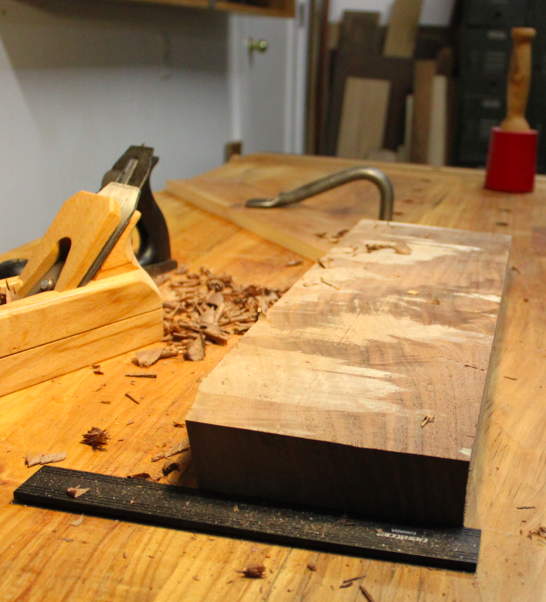 It worked fantastically. In fact, when traversing the grain with my scrub plane (planing diagonally so I could take a heavier shaving and reduce tearout so I could plane this rough sawn piece fairly flat as quickly as possible), this method worked way better at holding the workpiece securely than using my tail vise and bench dogs had ever worked. 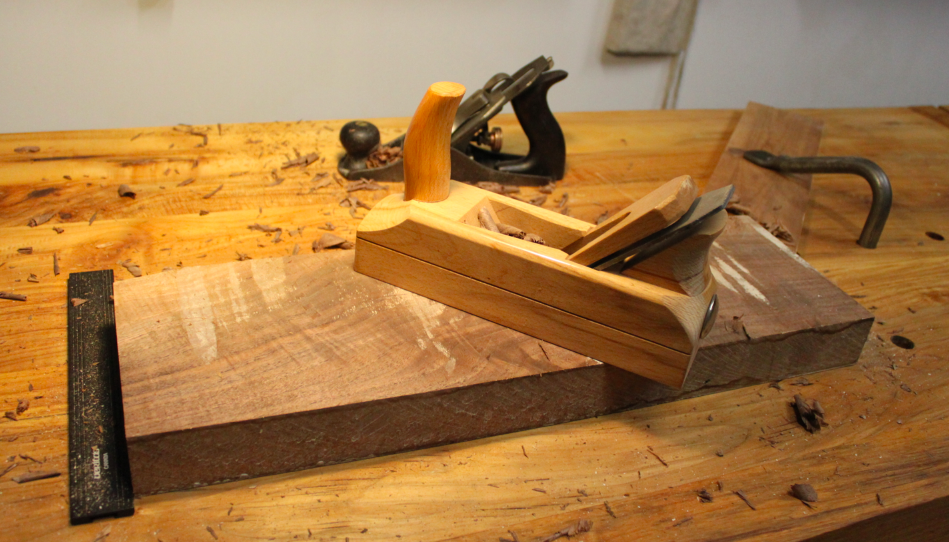 When cleaning up the scrub marks with a smooth plane, planing along the grain, it worked superbly as well, no slipping or sliding around at all. 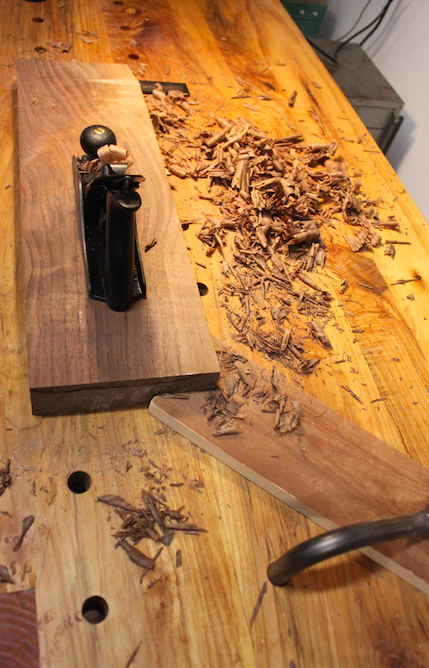 Two afterthoughts I had when I’d finished making my batten was that it might be a much better and longer lasting tool had I made it out of a harder wood than pine, something like oak, but I think the pine will work just fine, at least for a while. I have suspicions that the more I use it, the more clever I might be able to become with the design and can then make another one.

The second thought I had was that it might be better if I were to make it out of thinner stock. When planing down thick stock, this one will work great, but if I’m working on a piece thinner than my batten, the batten might get in the way of my hand plane.

As with any of these projects, I wanted to make this a useful project for someone without a workbench, a fancy plane stop, or bench dog holes. I screwed a thin scrap piece of maple to the edge of my assembly table. Bam. Plane stop.

Can’t screw a scrap piece of wood to the dining room table? No problem, just use two clamps to hold the plane stop to the edge of your table. Then, use a clamp to secure the batten to the tabletop and thus hold the workpiece nice and snug against the plane stop. 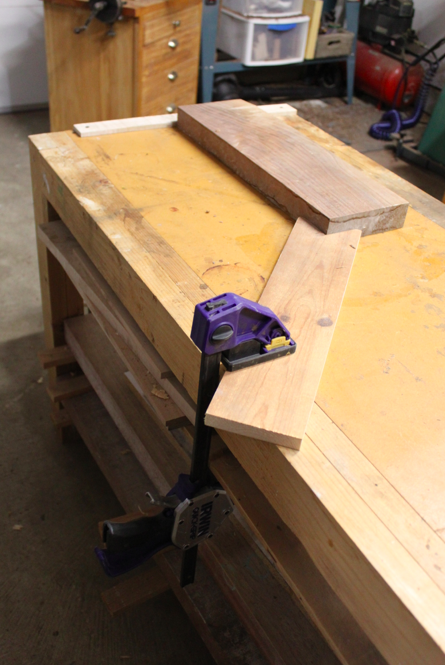 See? Anyone can do woodwork anywhere. Cheers!