The texture and flavor of the cut are determined by the part of the animal from which it is cut, and this can make the difference between whether it’s suitable for grilling, braising, using as taco filling, or serving with sauce espagnole. 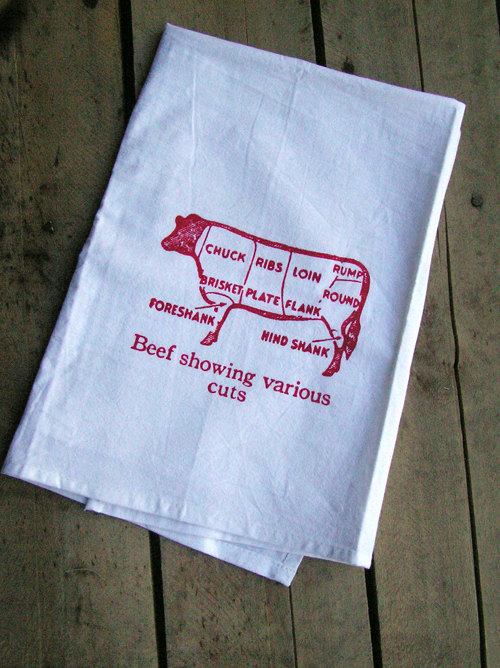 To get you better acquainted with the cuts and their best uses and to heighten your food and cooking prowess, here’s a primer on the different cuts of beef. 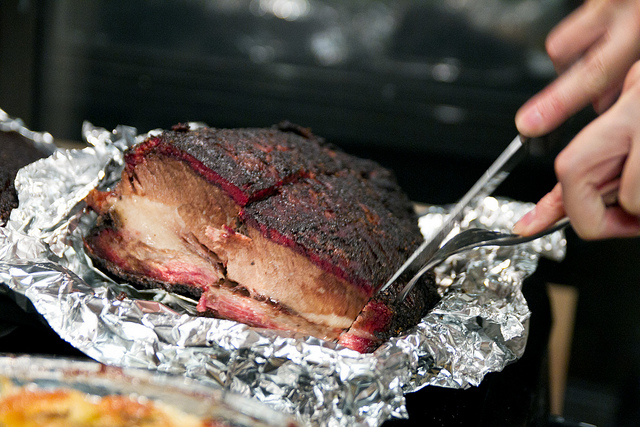 What it is is:

A cut of meat from the breast and lower chest of beef or veal. While the borders of this cut can vary depending on who you ask or what part of the world you’re in, brisket generally includes some of the outer and inner pectoral muscles. Since this is a very “worked” muscle, brisket is a somewhat tougher cut of meat.

Many beloved methods include slow cooking of some sort owing to its somewhat tough texture. Braising is very popular, allowing the meat to first sear and then simmer to tender, flavorful perfection. Smoking is also very popular, first marinating and then slow cooking the meat over wood or charcoal slowly until it is practically fork tender. Kansas City barbecue is a particularly famous version of smoking in which the meat is slow smoked and then covered in a thick barbecue sauce with tomato and molasses, and it works splendidly with brisket. 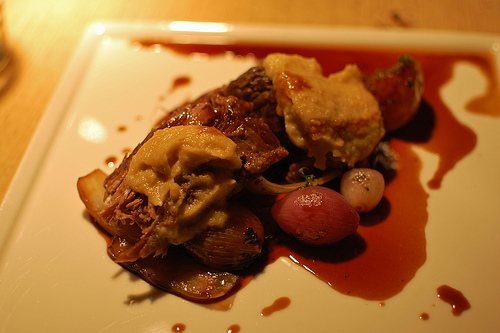 A chuck steak is a rectangular cut of meat that sits above the rib and includes part of the shoulder. Since this is an area with a lot of intersecting muscles, chuck steaks can be somewhat tough, and the grain of the meat may be different even within the same cut of meat. Examples of chuck steaks include the chuck eye steak, shoulder top blade (also called flat iron steak) and shoulder steak.

With chuck steaks, the challenge is to soften the tough meat so that you can enjoy the excellent flavor, which has a great balance of meat to fat. Typically, chuck steaks are marinated before cooking, which helps soften the meat. Broiling, braising or grilling are favored methods of cooking chuck steak, helping to further soften the meat and make it tender when served. This cut is also one of the most popular for making ground beef, so it’s also a favored meat for meatballs and burgers. 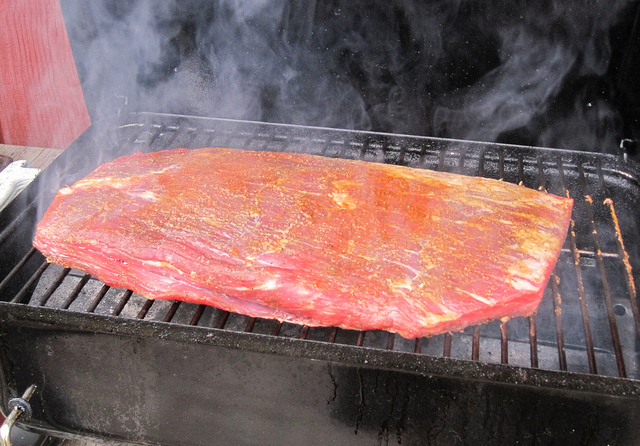 A relatively long and flat cut of steak from the low abdominal muscles of the cow. It is characterized by its grain, which features long, string-like fibers running through the steak. Though extremely flavorful, the flank steak can be a tough cut of meat.

Slow cooking techniques using moisture, such as braising, are great to help soften this tough cut of meat. It can also be grilled, but be prepared to watch it. Marinate the steak first and monitor it very carefully, as this is an easy cut to overcook when it’s on high heat, and it can also be tricky to remove from the grill. 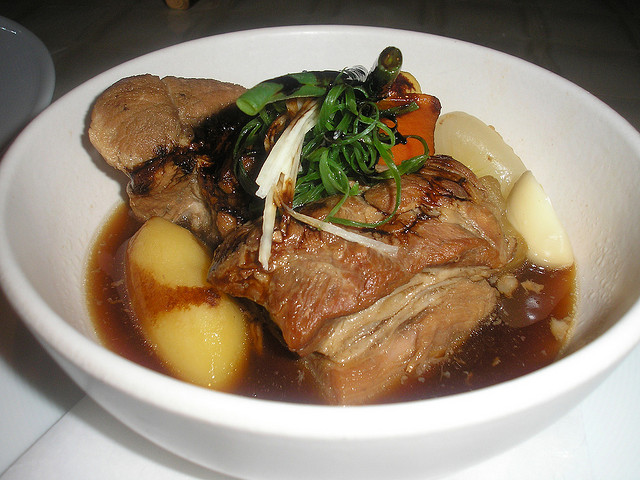 Also known as “short plate,” this is from the front belly of the cow, just below the rib cut. The short plate produces types of steak such as the skirt steak and hanger steak, as well as short ribs. It’s characterized by its high fat content and the large amount of cartilage that’s in this cut.

The challenge with the plate cut of beef is to maximize all of the flavor from the high fat content but minimize the tough texture. Braising is a fantastic choice for beef plate, softening everything and allowing the fat to flavor the entire dish. When served in a light broth or sauce espagnole, it’s a thing of great beauty. Marinating and pan frying the meat is also quite popular, and skirt steak is often used in dishes such as carne asada. Meat from the beef plate is also used in ground beef.

From the center section of the rib, this cut’s tender texture and well-distributed marbling makes it one of the more desirable (and expensive) cuts of beef. The rib cut is where you’ll get the rib roast and rib-eye steak.

Because it’s so tender, beef rib is well suited for various forms of dry-heat cooking, and does not require marinating. In French cooking, it’s called entrecôte, which translates as “between the ribs,” and it’s often served with a compound butter or delicious brown sauce. 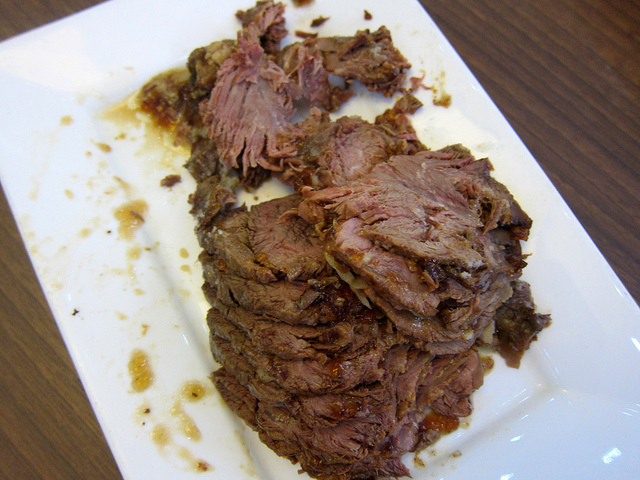 The shank comes from the upper leg portion of the cow. Since this is a very well exercised part of the body, the meat is lower in fat and tends to be sinewy and dry.

To be completely honest, this is more often used as an ingredient or component than as a stand-alone beef dish. It is often used for beef stocks and to make low-fat ground beef. If cooking, as with most tougher cuts of meat, slow cooking methods involving moist heat work best with shank beef. Yep, that means it’s a great meat for braising. It’s sometimes used in the classic and cozy slow-cooked French dish beef bourguignon. As it is very lean, it’s also used to prepare very low-fat ground beef. 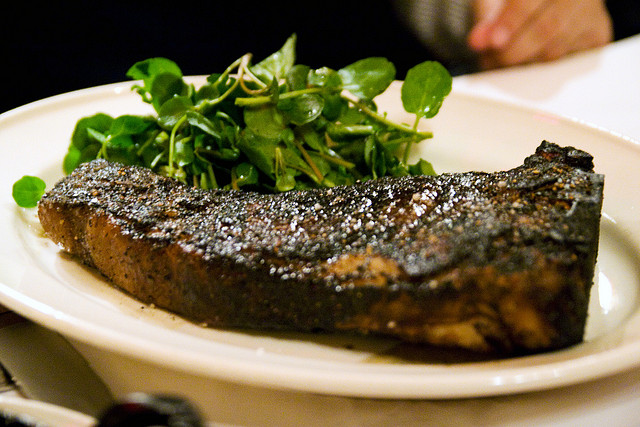 This cut comes from the back of a cow, below the ribs but before the rump, including part of the spine and the top loin and tenderloin. Cuts of steak that come from this region of the cow include porterhouse, strip steak and T-bone. Steaks from the short loin are desirable with their extremely tender texture and superior flavor.

To let the flavor shine, you want to do as little as possible with steaks from the short loin. While simple dry heat methods, such as grilling or pan frying, are best, this doesn’t mean that you can’t be creative with your cookery. Crusting the steak with pepper or spices, or serving with compound butter or a delicious sauce can make this a simple but stellar meal. 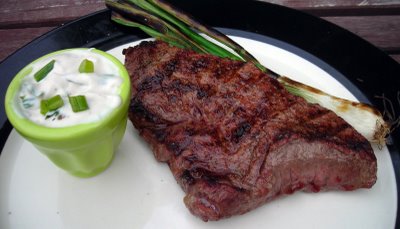 This is the rear, back portion of the cow, continuing behind the section from which short loin cuts. The sirloin is divided into a few different cuts, the most prized of which is the well marbled top sirloin, which is often marketed under that name. The bottom sirloin is larger but less tender, and generally cheaper. In general, sirloin cuts are good in flavor and less expensive than short loin cuts.

Sirloin steaks can be cooked in a variety of ways. Because they are not too tough, they don’t need to be marinated before cooking. They can be pan-fried on the stove, grilled, broiled and roasted. It’s a great steak to serve with a potato or homemade pasta on the side. 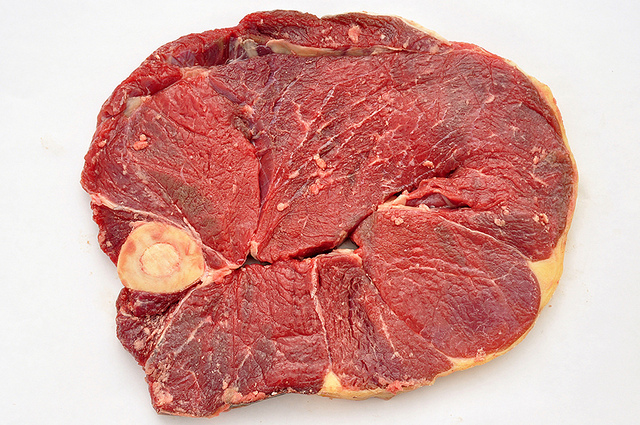 A round steak comes from the section of the cow directly below the rump but above the shank. It is round in shape because of the part of the leg from which it is cut, and may or may not come with the bone still connected. “Eye” round, bottom round and top round are the different types. This is a lean cut and it is moderately tough.

Because of its lack of fat and marbling, dry heat methods of cooking, such as grilling or roasting, can dry out round steak. Moist heat methods, such as braising, will tenderize the texture while preserving the flavor. Round steak (along with shank) is also often used to make beef jerky.

What’s your favorite cut of beef?