We’ve chatted before about the inherent characteristics of linen. Linen is stiffer and has less elasticity than cotton, for example. People are sometimes leery to work with linen — its stiff, inelasticity does take a little more care to use. However, you’d really be missing out if you let this scare you away from weaving with linen!

Here are some tips to help you to delve into linen and the lovely fabric that can be woven with it! 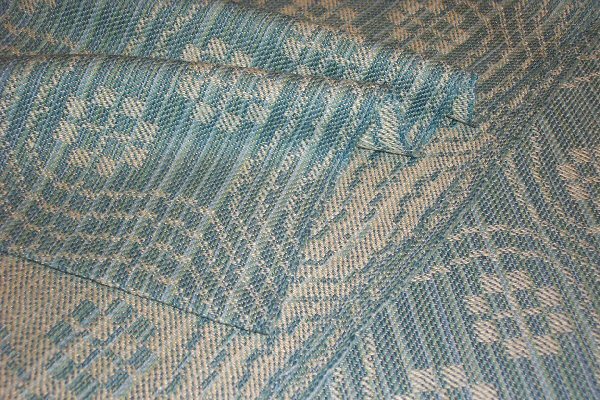 Tip #1: Utilize the more expensive yarn in the weft to reduce waste.

Linen is more expensive than cotton so sometimes it’s a good idea to put a cotton warp on and use the linen just for weft. Dyed linen is even more expensive, so adding color to your cloth by using a nice colorful cotton warp and a natural linen weft can be a more economical way to start weaving with linen.

Using cotton as warp also uses the cheaper yarn in the loom, which means less waste in terms of the more expensive yarn – the loom waste will be the cotton. The resulting cloth will also have more drape than a 100% linen fabric, which may or may not be an additional benefit depending on what you are making.

Linen likes a humid environment. If you live in an arid climate it might be a good idea to run a humidifier to increase the humidity around the loom. If you are using the linen only for weft, you can build a humidor which will help add humidity to the yarn and make it easier to work with. 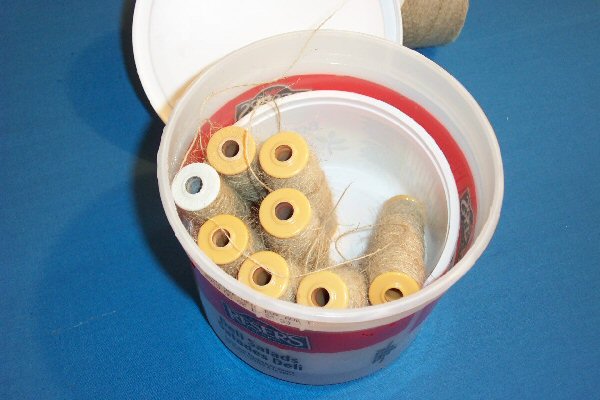 Two plastic tubs, one smaller than the other with the smaller tub floating on water — when the lid is put on the larger of the tubs, the bobbins wound with linen for weft will take up the moisture into the yarn.

In a dry environment, the stiff springy linen can cause some problems as it comes off the bobbin. Ideally an end feed/delivery shuttle would work best but if you don’t have one of those it is a good idea to wind the bobbins just even with the flange of the bobbin and store them in the humidor for at least 24 hours, preferably longer before using, which will help to make the yarn more pliable and less inclined to leap off the bobbin and wrap around the spindle of the shuttle.

Winding with tension so that the upper layers cannot cut down into the lower layers will also help keep the bobbin from jamming in the shuttle. Learning how to hold and throw the shuttle to encourage a smooth feed off and rhythm of weaving will also help.

Tip #4: Hold and throw the shuttle in a way that helps control the yarn. 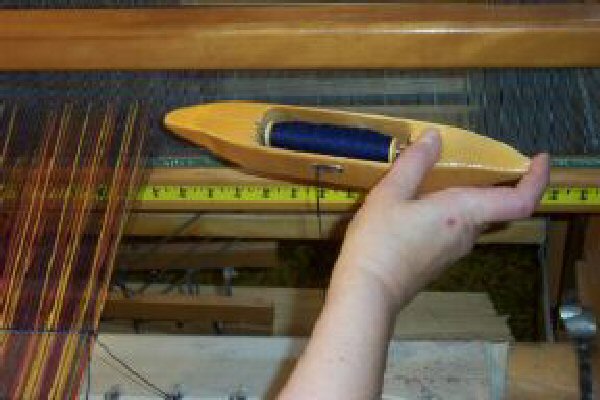 I hold my shuttle ‘under hand’ and use my thumb to help control the spin of the bobbin and prevent the bobbin from casting off excessive weft which can wrap around the spindle.

When using linen for warp it is very important to wind the yarn as consistently as possible. Due to the lack of elasticity, tension for a linen warp needs to be fairly high in the loom. In a jack action loom, this can sometimes cause the shafts to ‘float’. For some looms it helps to increase the height of the back beam. This can be easily done (depending on the loom) by adding a stick (or several sticks) clamped to the top of the back beam. Make sure the sticks are smooth and flat.

Tip #6: If necessary, use a warp dressing and/or a temple.

Finer linen threads as warp can be strengthened by added a flax gel or other sizing. The warp can be dipped into the sizing after it has been wound, or it can be painted on in the loom and allowed to dry. The warp could also be spritzed with water to dampen it. Take care with metal parts on the loom when spritzing. A humidifier running under the loom is sometimes sufficient to raise the humidity enough to make the linen less inclined to break.

Use a temple. A small temple can be built from tarp clamps and weights. Many people prefer this type of temple because it does not obscure the weaving. Draw in on a linen warp can eventually cause selvedge threads to break.

Tip #7: After weaving it is important to wet finish the cloth.

A cotton warp/linen weft cloth is easily finished in the washing machine and dryer. A hard press while damp with a low to medium heat iron will make the cloth shine.

Linen makes lovely towels, table textiles, and window coverings. In a hot humid climate it’s great for clothing. Even though it takes a little extra care to work with it, nothing else is quite like it.

One Response to “Lovely Linen: 7 Tips for Weaving With Linen”