If you’re vegan and love to bake, learning how to veganize recipes is a vital food and cooking skill. After all, many classic recipes include dairy and animal-derived products such as butter, milk and eggs. These ingredients not only contribute flavor, but perform distinct roles in the baking process, from leavening and binding ingredients to balancing acidity. 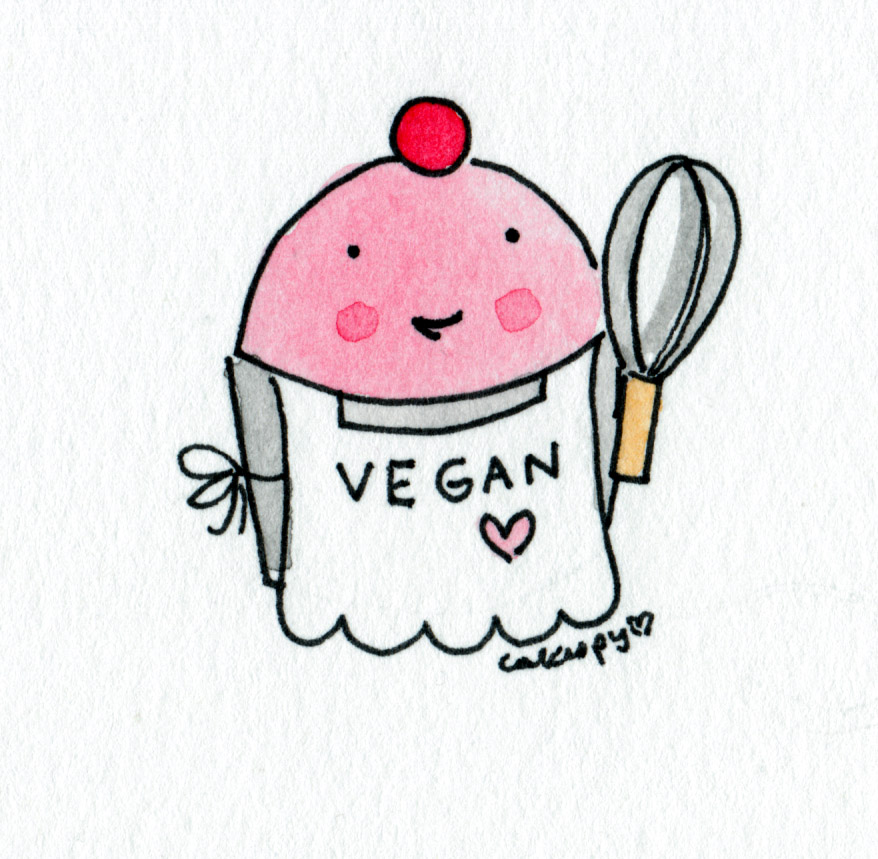 Illustrations and photos via CakeSpy

Replicating all of the ingredient processes and not sacrificing flavor may seem daunting to the vegan baker, but it need not be.

These days, just about any recipe, from cookies to brownies to cakes and even flaky homemade pie crust can be veganized quite easily.

Here are some tricks and tips to get you started, organized by common baking ingredients.

Once you’ve learned how to veganize a recipe, you can re-create any recipe, even if it contains dairy or animal-derived products. Take a look at the recipe you’d like to veganize, and evaluate which ingredients need to be replaced. Now, take a look at this handy guide of substitutes to decide which will work best for your recipe. Happy veganizing!

Note: Most supermarket varieties of sugar are not classified as vegan, so be sure to look for explicitly vegan sugar when baking with it. 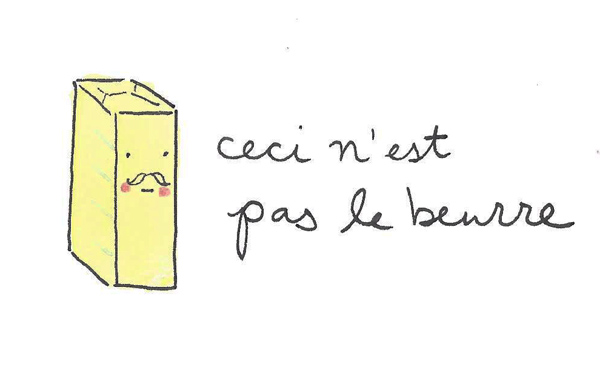 Butter provides a tender texture and rich, luxuriant flavor to baked goods. Here are some of the most common substitutes in vegan baking.

Many vegan “butter” products would actually classify as margarine. Originally created as a substitute for butter in the late 1800s, this spread is made similarly to butter, but instead of dairy milk, it is made with hydrogenated or refined plant oils and water. Keep an eye on the label, though, as some margarines may contain traces of milk.

Margarine acts similarly to butter in baking, so you can use it in most recipes that call for butter and in the same quantities.

Be sure to use margarine that contains at least 80 percent vegetable oil, as low-fat margarine will not act the same during baking.

This is a solid fat, which is 100 percent fat as opposed to margarine or dairy butter. It is made from vegetable oils, such as soybean and cotton seed oil. The oil has been transformed to a solid state through hydrogenation, so it can be sold as a solid spread in tubs (such as Crisco) or even formed into sticks. It can be swapped in equal amounts for butter in recipes, and works well in pastry crusts, cookies and cakes. The only downside is that vegetable shortening can be quite bland, so it’s not the best choice for baked goods that rely on butter for the primary flavor, such as shortbread. For this reason, butter flavored shortening is available, too.

Brands such as Smart Balance create a healthier alternative to hydrogenated shortening. Made using a process that solidifies vegetable oil using natural saturates balanced with polyunsaturates from soy and canola oils allows this product to avoid the hydrogenation process, which results in a higher saturated fat level. However, not all non-hydrogenated shortening products are suitable for baking. Generally, brands will market “baking sticks” or specify on the packaging if the product is suitable for baking.

Using coconut butter to create a vegan butter substitute can yield a product that has flavor and superior texture. 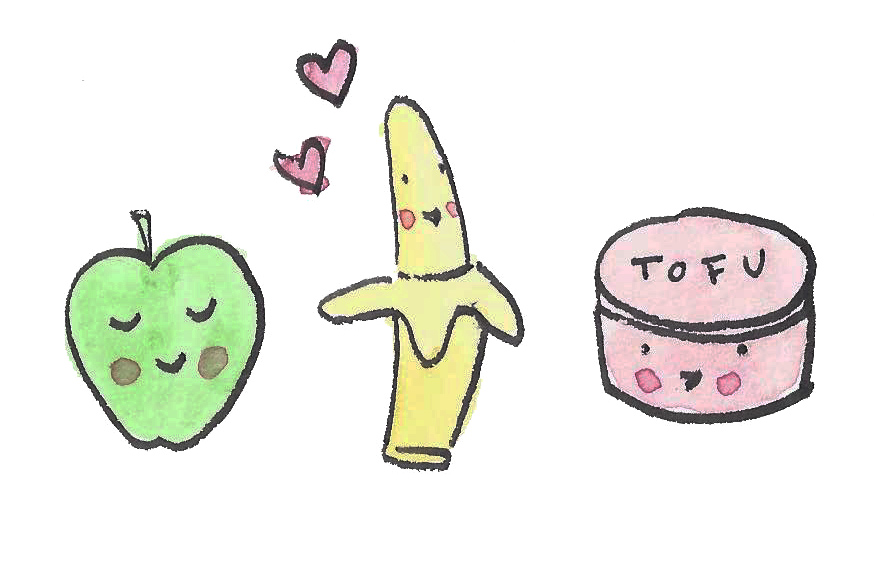 Eggs perform many important roles in baking, adding rise and acting as a binder. Depending on the primary role that eggs play in the baked good in question, a different egg substitute may substitute your needs. Here are some of the common choices for substituting eggs in baking.

Ounce for ounce, these are probably the easiest swap for eggs. One popular brand, Ener-G, is made using a mixture of potato starch, tapioca and leavening ingredients. This unique mix of ingredients allows the replacer to play many of the roles of the egg: the potato and tapioca will bind and add volume, and the leavening will help give baked goods their rise.

In particular, “silken” tofu (the kind that has a soft texture, almost like cream cheese) is appropriate to substitute for eggs in baked goods, at a conversion of 1/4 cup tofu for 1 egg. It has a fairly bland flavor and is an excellent binder. However, it does not provide leavening, so it is more appropriate for dense baked goods or sweets that don’t require much rising, such as brownies or cookies.

Mashed bananas (extra ripe is best) can be used for eggs in certain recipes at a conversion of 1/4 cup banana for 1 egg. Like silken tofu, the bananas are a fantastic binder but will not provide lift, so they are more appropriate for baked goods that won’t require much lift or that already contain leavening. In addition, bananas do have a distinct flavor, so choose recipes that will be harmonious, such as oatmeal cookies, bread pudding and quick breads.

At the same conversion of 1/4 cup applesauce for 1 egg, this sweet stuff can be swapped for eggs in recipes. Like banana and tofu, it binds but doesn’t lift. Applesauce isn’t as heavy as tofu or banana, so it won’t make your baked goods as heavy, but it still works best in recipes that have some other form of leavening. It will also impart an apple flavor, so recipes such as muffins, quick breads and cookies will work best.

These seeds aren’t just a heart-healthy topping for your oatmeal. They can be used for vegan baking at a conversion rate of one tablespoon of ground flax seeds with three tablespoons of water for 1 egg. When the seeds are ground and whisked with water, the coating of the seeds forms a gelatinous texture. This makes ground flax seeds a good emulsifier, which will assist in giving baked goods a superior texture. They do have a slightly nutty flavor, so they will work well in recipes that contain whole wheat flour, oats or anything which will benefit from a slightly “healthy” flavor.

Remember how you made a volcano “explode” by combining vinegar and baking powder? That same reaction can help a cake rise, and is especially effective in creating light cakes. More information can be found on this helpful page with information on egg substitution. 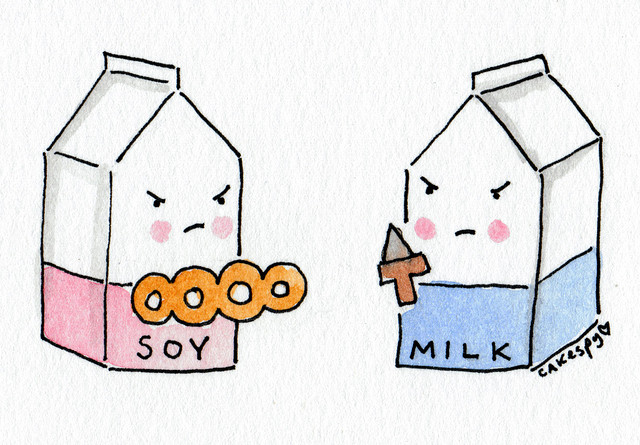 In baking, milk and cream provide texture, moisture, and assist flour in developing gluten. Cream is employed to make whipped cream, an undeniably popular topping, as well. These are some of the key substitutes to use in vegan baking.

There are a large variety of non-dairy milks on the market. Soy, rice, nut (almond, hazelnut, etc), hemp, oat or coconut milk can replace dairy milk in any recipe, in equal quantities to milk. For best results, try to find a non-dairy milk without added sweeteners, as any added sugar can throw off the texture and taste of a baked good. Soy milk can also be made at home: here’s a recipe.

Non-dairy milk doesn’t have the structure to create whipped cream, but it still can be done.

There are a variety of “vegan whipping cream” products on the market, such as Rich Whip, which contain hydrogenated oil and sweetener. They are thick, and will whip with a texture that’s comparable to cream.

A popular (and luxuriantly decadent) substitute for whipped cream in vegan baking is coconut milk whipped cream: here’s a recipe.

You can create vegan “buttermilk” the same way you’d create dairy buttermilk. Add 1 teaspoon of vinegar or lemon juice per 1 cup of non-dairy milk before adding it to the recipe. This will add the acidity necessary to help baking powder work, and will provide a great texture to your sweets.

A number of soy or non-soy yogurt, cheese and sour cream replacements are available in stores. These can be swapped in equal quantities for the yogurt or cheese called for in the recipe.

This is a flavorless substance derived from seaweed that’s sold as a powder or as flakes. Once ground and cooked with water, it turns into a thick gel. Powdered agar-agar can be substituted for gelatin powder in equal amounts.

Another seaweed, but this one comes from Europe and North America. It sets up softer than agar-agar, so it’s better suited for puddings and softer fillings.

Many kosher gelatins are vegan and can be swapped for gelatin in equal quantities; check the label to confirm.

This sweetener is derived from the agave plant, which looks like, but is not in fact, a cactus. It is slightly less viscous than honey but no less sweet, so it makes a fantastic substitute both in taste and texture.

Made from the sap of coconut palms, this liquid is reduced to a thick consistency. It will fill in for the texture of honey, but not so much the taste. Use with baked goods, which will be harmonious with a coconut flavor.

Honey is primarily used as a sweetener in recipes, but its sticky texture can also help ingredients adhere. Strictly speaking, honey is an animal product, thereby making it vegetarian but not vegan. Double check with the person you are cooking for if honey is okay in their dietary regiment. Or, use a honey substitute.

Products such as “Honee” (a bee-free honey substitute made with apples, sugar and lemon) can be used as a straight honey substitute and also work well drizzled on finished baked goods and cereals.

Now that you know how to veganize baking recipes, why not test out these substitutes while whipping up some decadent chocolate cakes or a flaky pie crust?

Have you ever “veganized” a recipe?

One Response to “Veg Out: A Beginner’s Guide to Veganizing Baking Recipes”