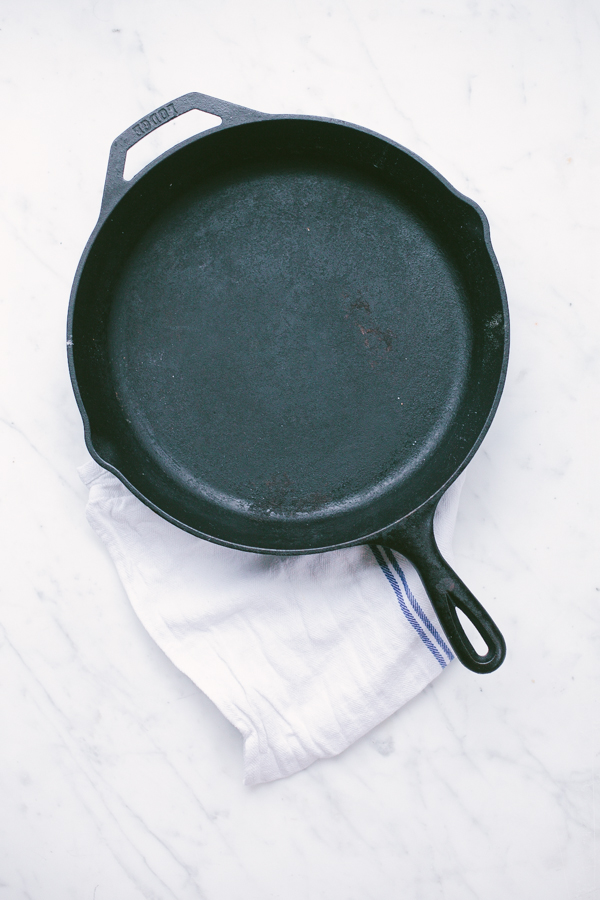 Why it’s the most used pan in my kitchen

My 12-inch cast iron skillet has never left my stove in the three years since I’ve purchased it. There’s no need for it to be tucked away into the nethers of my highly disorganized cupboards because it is used for nearly every meal of the day. In the morning eggs fry and lace around the edges before easily slithering out of the pan. Around lunch time bread evenly crisps and turns golden while the cheese tucked in between the slices softens and melts. Any bits that may have fallen from the sandwich crisp up to form my favorite part of grilled cheese – the shattering and intensely flavored fried cheese crackers- and then they too easily slip off the pan. For dinner, a hearty sauce of tomato and sausage simmers before cooked pasta tucks into the pan. Cheese on top and then into the oven it goes and emerges bubbling, hot and topped with a crisp cap. If we were to have dessert the cast iron gets used for that as well, whether it’s a crisp, cake, cookie or biscuit – I always turn to the same pan. 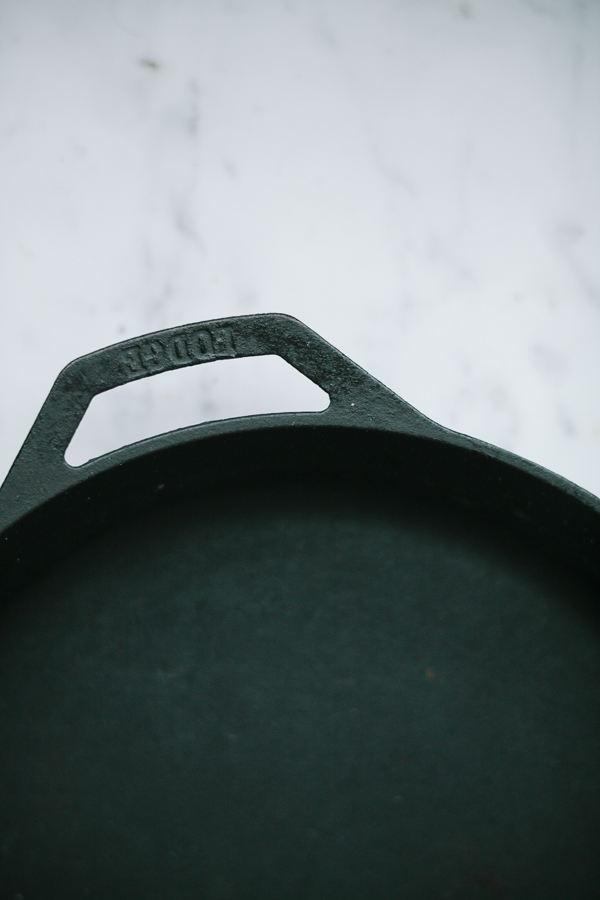 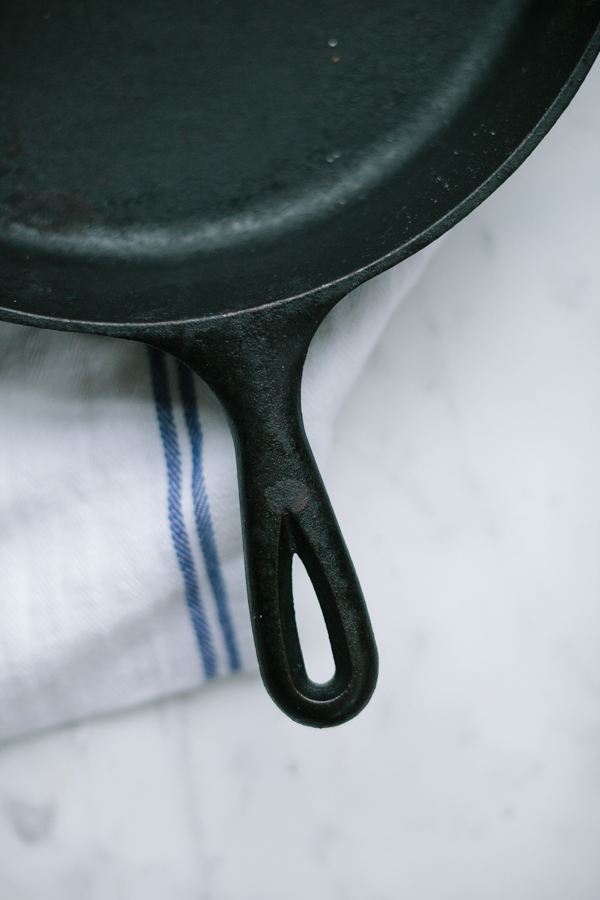 Well, for one it’s an incredibly versatile pan. It fries, sears, simmers and bakes. It is a thick and heavy pan which may not be good on the wrists but it great for even cooking. (Because of the heaviness I don’t recommend larger than a 12-inch skillet).

With enough seasoning (we’ll talk about that in a moment) the surface becomes like a non-stick but where the non-stick fails to be able to give you a good thick sear with little bits (fond) left on the pan to soak up into a flavorful sauce, the cast iron wins.

Perhaps best of all, it’s the easiest pan to clean.

I have a very small kitchen so any new appliance has to have been given much thought before it’s allowed to take up valuable real estate. For this reason I have very few, if any, single purpose tools. And for me, this is the very best reason to have a cast iron. I could go on about the science of why things cook better in it and how it conducts heat so well and I could even delve deep into a romantic diatribe about how these pans last for generations and the very pan that you fried last night’s chicken in could be the same one your great-grandchildren use. Those are all great reasons but for me this pan remains on the stove because my roast chickens (for more about roasting, view Roasting Techniques Every Cook Should Know) that come out of its grip are both crisp and tender. The steaks have a deep thick crust while the interior remains brightly pink. Cakes bake high and crackle around the edges and even my delicate little spices toast evenly on the dappled black surface. It works. 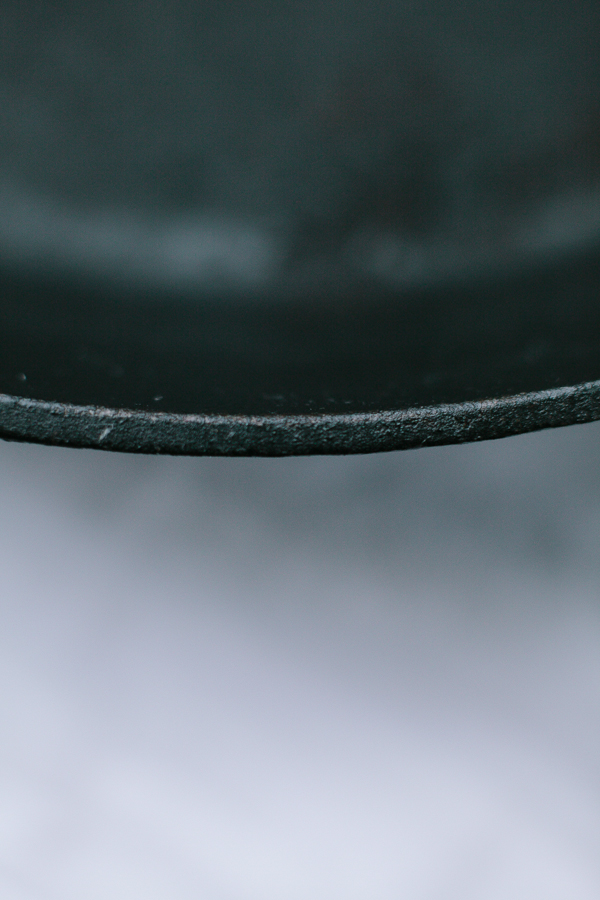 I wish I could say I use the same pan my grandmother used but I bought mine new and pre-seasoned. It was less than $25. When I first used the pan the surface was very dry and things did tend to stick. I would scrub out the pan with just plain water, no soap as soap will remove the season, and then dry it completely before coating the pan with a thin layer of oil. Over time the pan has built up its season so that the oil is no longer needed. If it does start to look dry again and I’m noticing a bit more sticking I’ll simply add a thin layer of oil over the surface once its been cleaned.

I used to fear the process of cleaning and seasoning my cast iron but I’ve found it to be so simple. The only rules I follow are not to soak the pan in water for too long and not to use soap. I keep it dry and clean and as I said before, it always sits on the stove.

It’s inexpensive, replaces the need for many pans and can be used in nearly all cooking and baking applications. This is why you need cast iron.

Why do you love your cast iron skillet?