Tomatoes can play host to a number of pests and diseases. The key to healthy tomatoes is to take steps to prevent these problems, as many of them can’t be easily solved once they start. To give yourself the upper hand, only purchase disease-resistant varieties, plant your tomatoes in rich soil, fertilize with a tomato-specific fertilizer frequently and water consistently at the soil level in the morning.

These broad tips will help prevent most problems, but specific issues call for specific solutions. 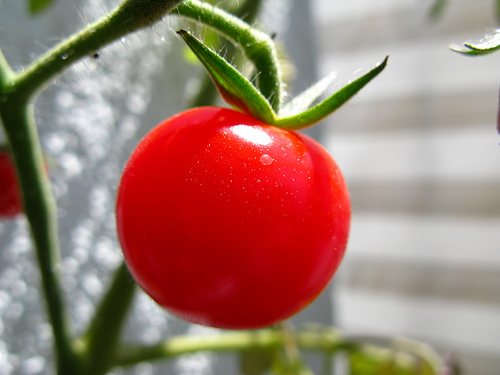 Tomato diseases to watch out for

Powdery mildew forms on plant leaves when conditions are wet and shady, giving mildew time to form. You’ll know it by its white powdery spots coating each leaf.

To avoid powdery mildew, water your plants in the morning at the soil level.  Once it’s established itself, it’s impossible to get rid of, but possible to control. Pull plants and leaves that are beyond repair and dispose of them in the trash. For those less affected, mix up a solution of 9 parts water to 1 part milk in a spray bottle. Spray the leaves at least once a day to keep the mildew under control. 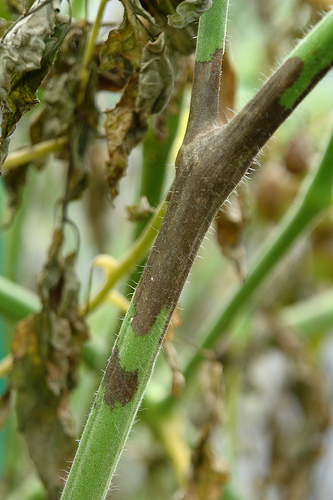 Blight on tomatoes comes in two forms, early and late.

Early blight affects stressed and weak plants, and shows itself through concentric spots on the leaves. It’s brought on by a fungus that thrives in wet conditions and can overwinter in the soil to attack your plants year after year. Early blight doesn’t mean total devastation to your plants, they will be weakened by it but can still produce edible fruit. It can be prevented by purchasing disease-resistant seeds and plants, allowing plenty of space for air circulation around plants and rotating tomatoes to a new bed every year. If you spot blight attacking your plants, remove the affected plants immediately and use fungicides to help those that remain.

Late blight is a true terror to the garden. It shows itself in greasy, gray spots on the leaves, stems and fruit. Once it’s detected, there’s no saving the plants, and other tomato plants within a hundred mile radius are susceptible to getting it through the quick spreading spores. If you suspect you have late blight, call your local cooperative extension for a positive ID, then pull out all tomato plants and destroy them. Do not plant tomatoes or potatoes in that bed the next year.

To prevent blight, plant disease-resistant varieties and keep an eye out for any signs of blight in wet weather. If it’s been reported in your area, you can help keep your plants free of it by using a fungicide.

These two types of wilt are both caused by fungus in the soil. It attacks the plant at the roots and keeps it from soaking up water, causing it to eventually wilt and die of thirst. To prevent this from killing your crops, rotate your tomatoes to a new bed every year, buy disease-resistant plants and water at the soil level in the morning so soil and plants have time to dry out.

Blossom end rot is not officially a disease, rather a deficiency. It’s caused by lack of calcium in the soil, and appears on the blossom end of the tomato fruit as a black and rotten spot. This problem can be prevented by providing a calcium-rich fertilizer and watering consistently.

Tomato pests to watch out for

Garden pests tend to attack stressed plants. Try to avoid insect issues by keeping your plants as healthy and happy as they can be. Check them often and at all times of the day for insects. It’s important to catch insect issues early to stop them in their tracks.

These teeny green and brown insects will congregate on your tomato stems and leaves and munch away until nothing is left. Use the hose to spray them off the plants several times a day. They can also be rid from your garden by attracting or purchasing ladybugs, who love to feed on aphids. 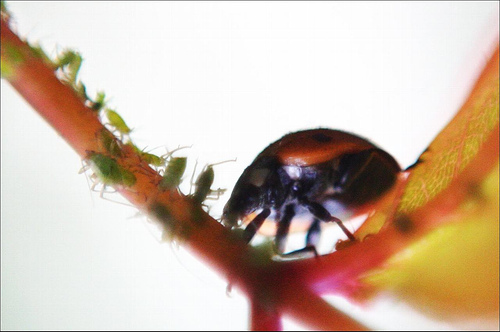 These pesky little creatures feed on stems, leaves and tunnel into fruit. Once they’ve gotten to the tomato fruit, it’s done for and must be thrown away. Prevent these pests by planting tomatoes far away from corn, which are the main attractant for these bugs. Once you spot them, they can be controlled using neem oil or insecticidal soap.

Cutworms live in the soil and love to destroy tomato seedlings by cutting right through the stem. Keep them off your vulnerable seedlings by placing a collar around the plant. This can be as simple as a toilet paper tube sunk one inch into the soil. 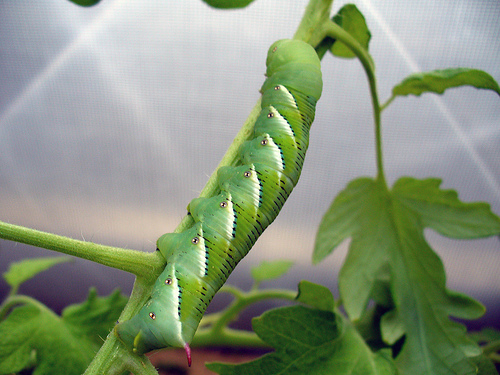 If your tomatoes are being attacked by hornworms, you can solve the issue in two ways. One, take the time to search them out and pick them off of the plants one by one. Or, use Bacillus thuringiensis to get rid of them.

The very best thing you can do for your tomato plants is take every step to ensure you’re preventing these pests and diseases before they strike. If you must remove plants or plant parts that are diseased, make sure you dispose of them in the trash, as disease can go on living in the compost pile. Hopefully you won’t have to deal with any of these issues, but if you do, you’ll be more prepared!

Grow healthy heirloom tomatoes every year! Sign up for the Craftsy class Growing Heirloom Tomatoes to learn how to nurture your seedlings, properly feed your plants, keep pests away and more!

Have you experienced any of these tomato plant problems this season?