Capturing the dramatic light as the sun prepares to dip below the horizon at the end of the day is a goal of pretty much every landscape photographer I’ve ever met. From amateurs, who’ve just purchased their first DSLR, to seasoned professionals, the allure of the golden hour at the end of the day is irresistible. Getting the most out of your sunset photography takes some practice, patience, and a little effort, but once you’ve captured your first really good sunset photograph, I’m sure you’ll be hooked too. 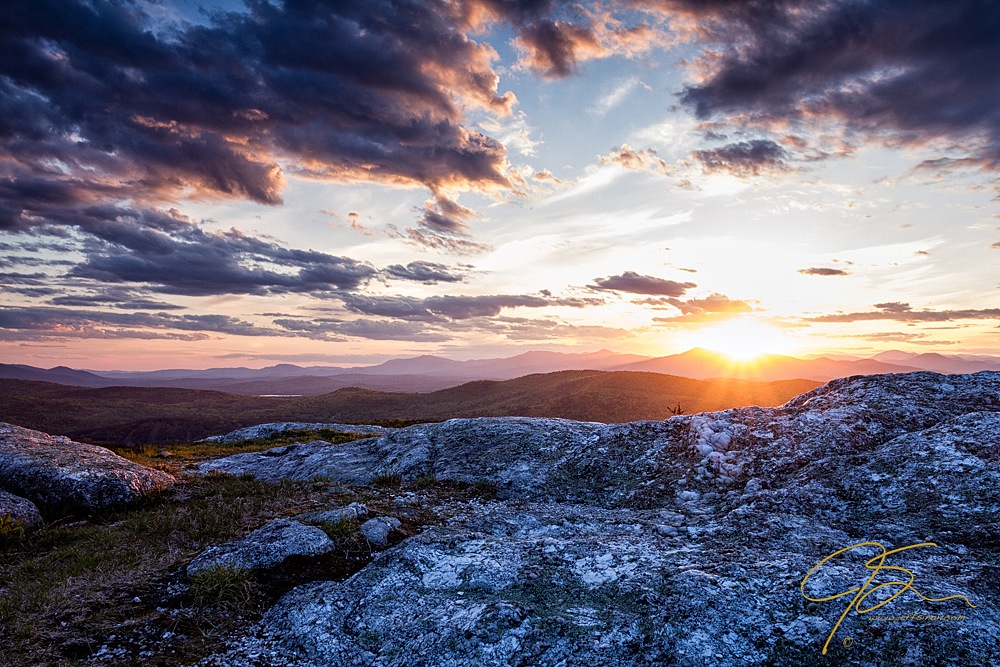 Here are 6 tips + a bonus top to improve your sunset photography:

For the best sunset photos or any type of landscape photos for that matter, use a tripod. And not one of those flimsy el-cheapo $29 models sold at most big box stores either. Buy the best you can afford, even if it means saving for a while to do it. To be blunt, the cost of a good camera support system may give you a heart attack, it sure shocked me when I started shopping for one. I have almost $900 invested in my tripod, ball head and the L-bracket attached to the camera.

While you don’t need to spend that much, my personal opinion is that if you’re spending less than in the range of $200 – $300, you’re going to eventually wish you had spent more. And, if you are truly serious about your landscape photography, eventually you will.

The benefit of a tripod includes holding your camera completely still when shooting in the low light and resulting longer exposure times, of a sunset. Using a tripod also slows you down, so you actually think about the photo you want to make rather than using the “spray-and-pray” method of shooting a ton os shots hoping one will be good.

I never, EVER leave my tripod behind!

I used to shoot almost exclusively with my camera set to “Aperture Priority” using exposure compensation to adjust exposure when I felt the camera was getting it wrong. Lately, however, I’m finding the easiest way to get good exposures is by setting my camera to the “Manual” setting. I know it’s scary the first time, but these next few steps will help get you started.

As I’m most often using an aperture somewhere between f/11 and f/16 (for the starburst effect like the image above, use a smaller aperture) I’ll be adjusting shutter speed to get the exposure I want. So, with the camera on Manual, and the metering mode set to spot*, I then meter off the brightest part of the scene that doesn’t include the sun, adjusting the shutter speed until the meter in the viewfinder shows one to two stops overexposed (to the right of center on the meter).

This is my starting point. I’ll then take a test shot, paying close attention the histogram and the highlight alert*, or “blinkies,” on the LCD to determine if I have any grossly overexposed areas in the photo. With the exception of the sun itself you want to avoid overexposure (the histogram bunched up on the right), as much as possible, so adjust to a higher shutter speed to bring the needle on the meter closer to the center.

One thing to remember, no matter what you do, the sun itself is going to be an overexposed ball in the sky. So, get the best exposure you can with a minimum of overexposed areas in the brighter parts of the photo.

*Photographer’s note: See your cameras user manual to find out how to change metering modes as well as how to enable the highlight/over-exposure alert on the LCD preview.

Think of “RAW” as the digital negative. It holds the most information, allowing you to recover some of the detail in any slightly overexposed highlights or underexposed shadows you may have in the photo. If your camera is set to record .jpeg files, what you see is what you get. Any details lost in the over or underexposed areas are gone for good.

Like Manual, shooting in RAW can be a little intimidating because now it’s up to you to decide, using your image editing software of choice, how the final image is going to look. You’re no longer leaving that up to the camera.

4. Use filters to balance the exposure.

More often than not, the sky will be much brighter than the foreground, which can present problems when it comes to getting a good exposure. If you adjust your exposure so the brighter sky is properly exposed, the foreground will end up too dark. Conversely, if you expose for the foreground the sky will be too bright. The trick to overcoming this is to use a filled called graduated neutral density, also referred to as a GND.

The graduated neutral density filter is a rectangular filter that fits into a holder attached to the front of your lens. The top half of GND filters come in varying darkness levels (measured in stops of light) that limit the amount of light able to pass through it, while the bottom half of the filter is clear. There is a gradual transition between the dark and clear halves of the filter. By placing this transition line on the horizon, you’re able to balance the exposure between the bright sky and darker foreground.

The photos below show the same scene both with and without a GND filter. In the second photo the overall exposure is much more balanced, the area around the sun much less over-exposed, and the sky has deeper and richer color. 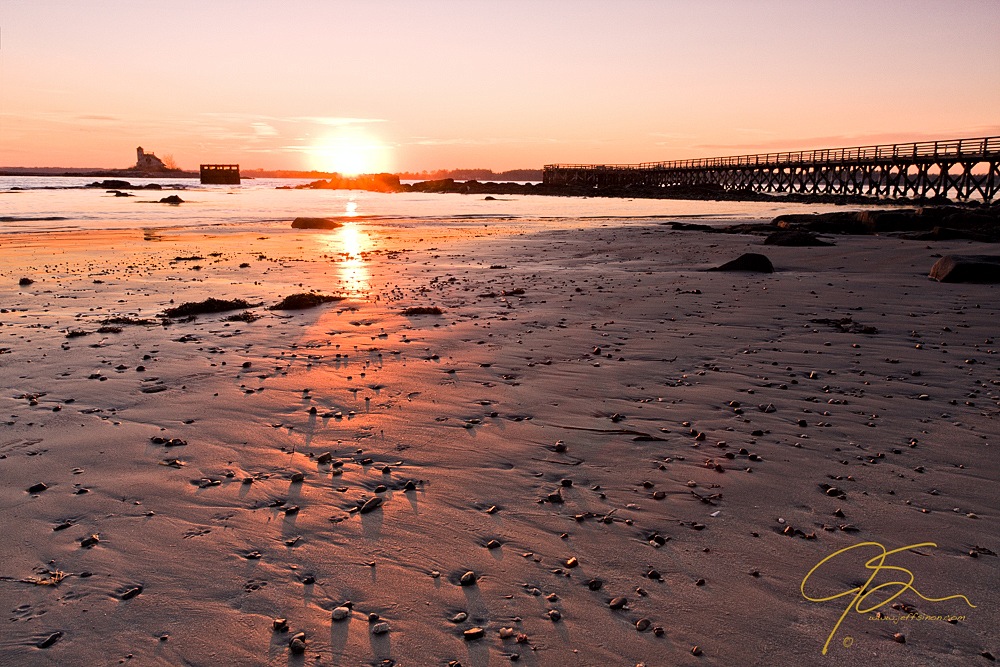 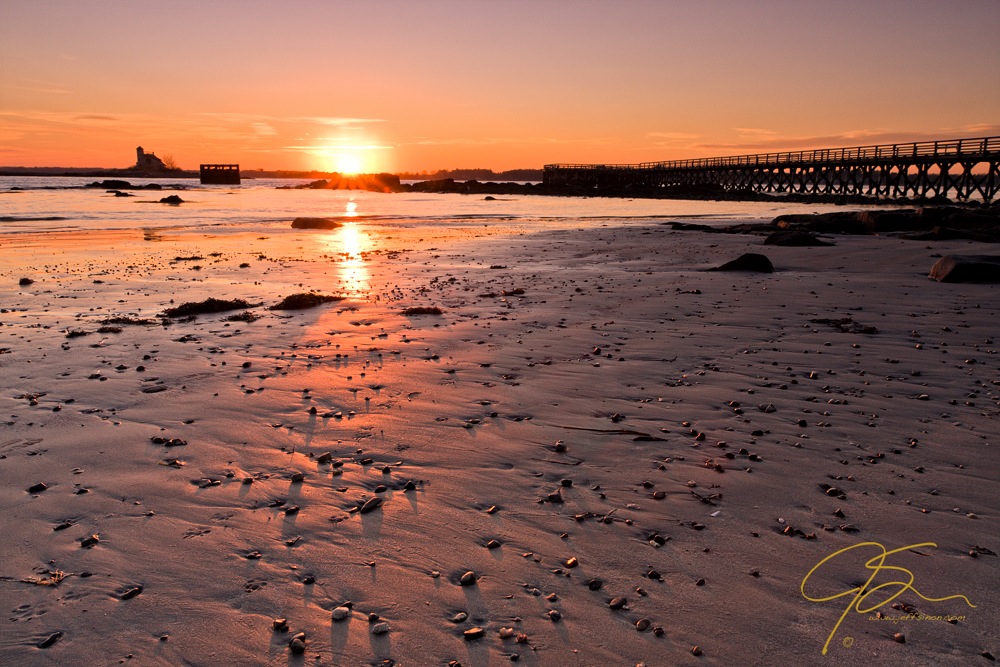 “But last time I checked the sun sets in the west…?” How right you are! But, I never said a good sunset photo has to have the sun in it did I?

Pay attention to how the last light of the setting sun is illuminating the landscape around you. It can be magical. 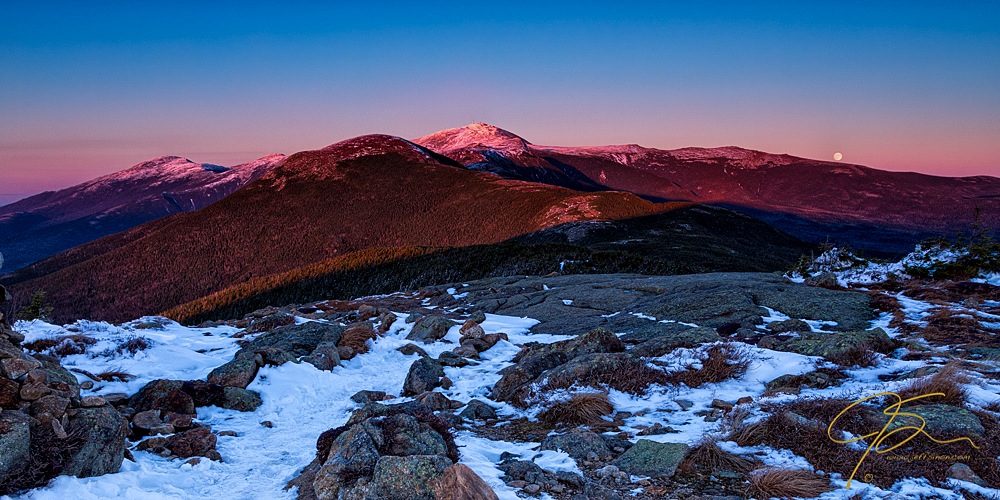 I saved my most important sunset photography tip for last. If you take nothing else from this article, remember this… The sunset is often just the beginning!

If you start packing up your gear the moment the sun finally dips below the horizon, you are very likely to miss out on the best show of the evening. As a rule, if there are clouds in the sky I will stay a minimum of 15-20 minutes past the official sunset time just to be sure I don’t miss this kind of dramatic sky.

While on a backpacking trip in New Hampshire’s White Mountains last autumn, I was fortunate enough to capture the image below. With clouds like these, I was anticipating a very nice sunset, and I surely wasn’t disappointed. However, what happened about 10 minutes after the sun had already set made the sunset itself seem pretty lackluster.

The key to this tip is clouds. If there isn’t a cloud in the sky, once the sun is down the show is most likely over. With a sky full of clouds though, the sunlight has something to reflect off of. Don’t miss it by leaving early. Watching a sunset like this is much better through your camera viewfinder than it is your car windshield on the way home. 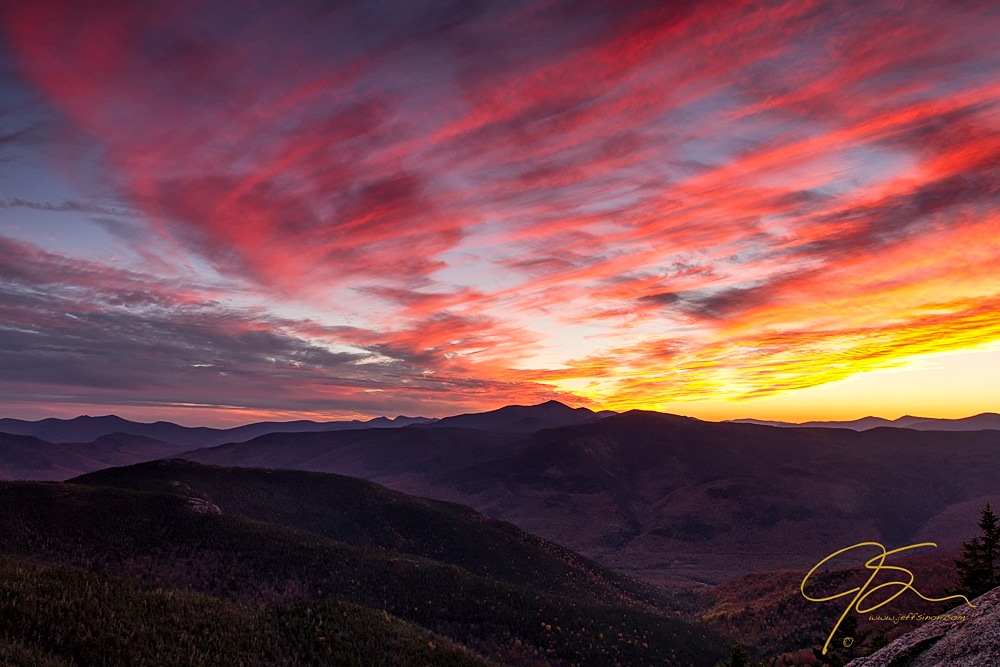 Change the staying at least 15-20 minutes after sunset to arriving the same length of time before it rises, and all of these tips work just as well for sunrise too.

Ever captured an amazing sunset? Share your best-painted sky image with us!