Superheroes have always been prominent in comic books, television shows and films, but their popularity have soared to new heights in the recent years with every massive blockbuster movie hit. Their enormous following is comprised of both children and adults alike, making superhero cupcakes one of the most requested themes. With Thor: The Dark World currently out in theaters, the continuous rise of these defenders is nowhere near over.

The baking squad was called upon to provide inspiration to help you save the day with these superhero cupcakes! 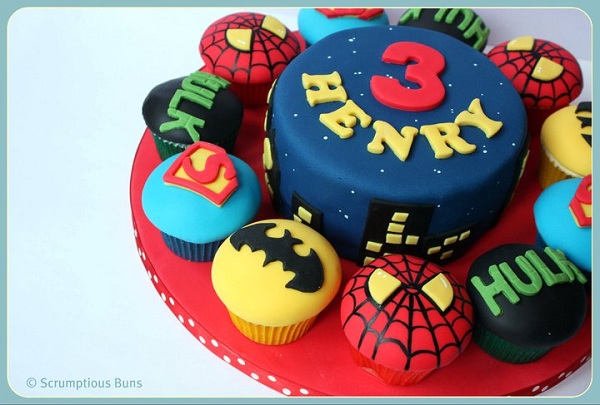 Scrumptious Buns is incredibly skilled at pairing cakes with coordinating cupcake creations, presenting remarkable displays. The starry-sky cityscape cake anchors the center with added personalization, while different superheroes are depicted with fondant-covered cupcakes. A variety of techniques are utilized to adorn the cupcakes, including hand-cut details and painted embellishments.

Learn more about painting on fondant in Bluprint’s FREE mini-class The Hand-Painted Cake with Erin Schaefgen. 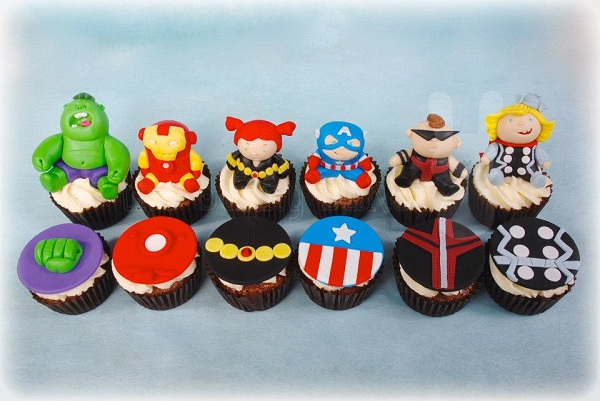 Photo via The Bunny Baker

The Bunny Baker transformed the members of the Avengers team into babies with these adorable three-dimensional fondant figures! The superheroes’ younger versions bear similar characteristics as the traditional members of the group, but with more bubbly and childlike features. Matching fondant toppers accent coordinating cupcakes, adding elements of their superpowers and clothing with simpler, time-saving designs. 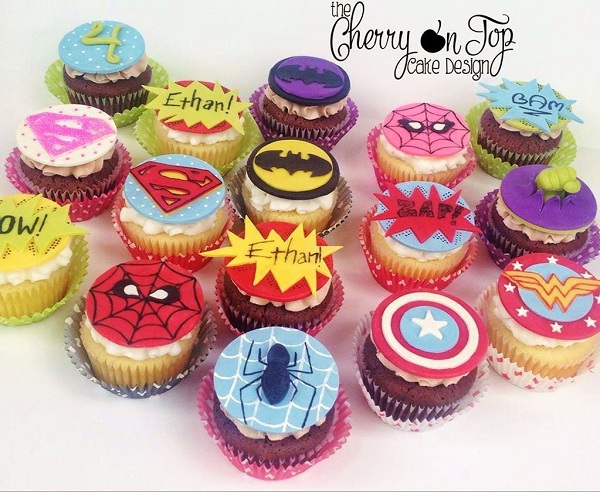 Bluprint member and cake artist Sugar Girl of The Cherry on Top Cake Design created this super set of cupcake toppers with the use of modeling chocolate, accentuated with painted details. The infusion of some nontraditional colors brighten up the display and appeal to boys and girls. 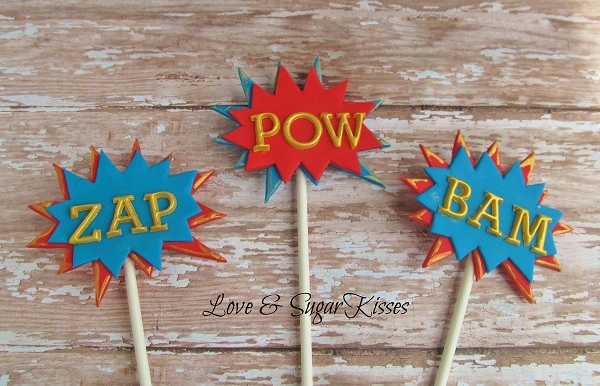 Retro superhero comics are always remembered by the iconic world bubbles, representing the sounds and images of battling with their enemies. Love & Sugar Kisses re-created these classic, descriptive words with the use of letter cutters and hand-cut layered backgrounds. By attaching them to lollipop sticks, the fondant toppers can easily be inserted into cakes or cupcakes, providing added dimension to the display. With the addition of painted gold highlights, these superhero accents are out of this world! 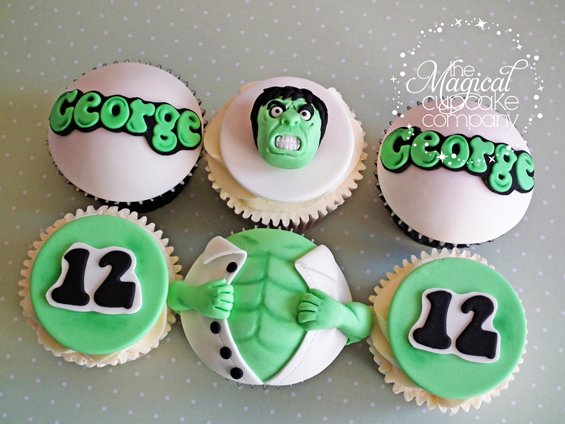 The Hulk is known for turning green when he loses his temper, as his body multiplies in size. The Magical Cupcake Company used the recognizable color to tie these amazing Hulk-inspired cupcakes together, while mixing some flat fondant toppers with domed pieces that cover the entirety of the confection. Dimension is added to a flat piece with the Hulk’s modeled face, while the domed piece with the shirt busting open not only has a rounded shape, but is accentuated with shading in the chest. The bubbly letters also assist in tying the entire larger-than-life theme of the Hulk together. 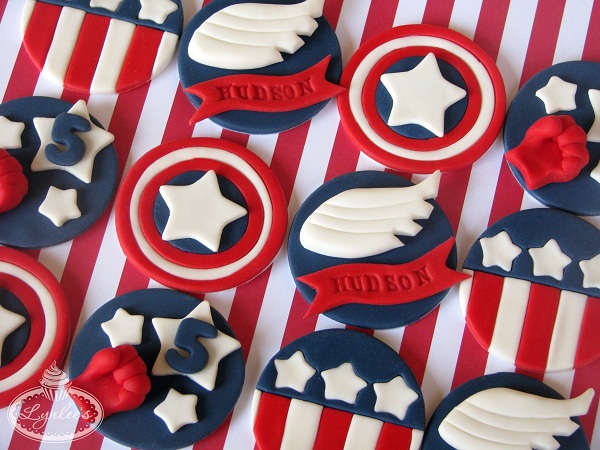 Captain America is the quintessential symbol of the American hero, represented most notably in his patriotic suit colors and emblems. These thematic fondant cupcake toppers contain the traditional red, white and blue, along with the stars and stripes, in a single layer pattern, achieved by gluing the pieces to a very thin bottom foundation to safely hold it all together. The shield was made in a similar manner, cutting out the circles with gradient-sized round cutters. 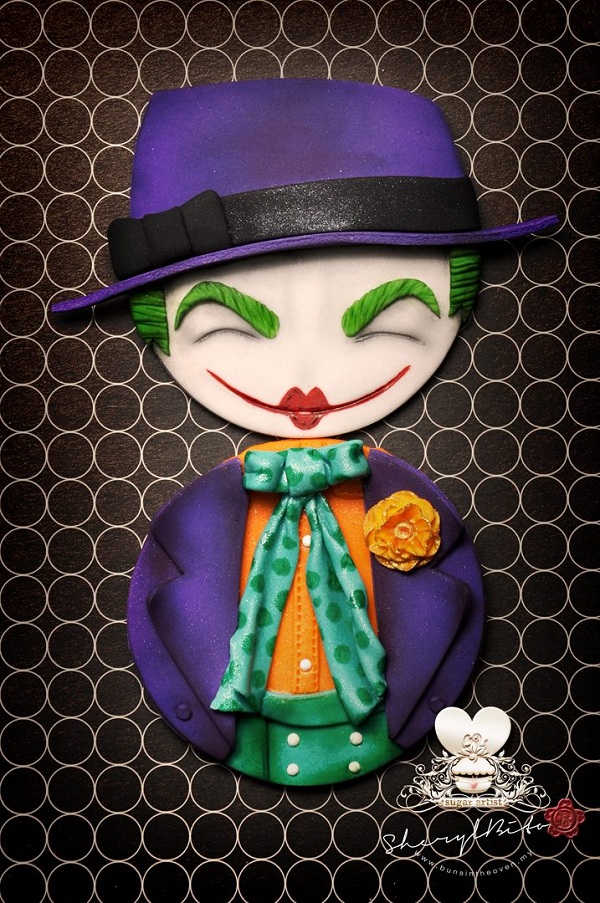 No superhero story would be possible without the infamous villains! Sheryl Bito, the instructor of the brand new Bluprint class Global Cupcake Design, created this jaw-dropping work of art representing the Joker from Tim Burton’s version of Batman. By decorating two cupcakes, the Joker’s body was built with amazing fondant embellishments and details, while the use of shading brings the character to life. 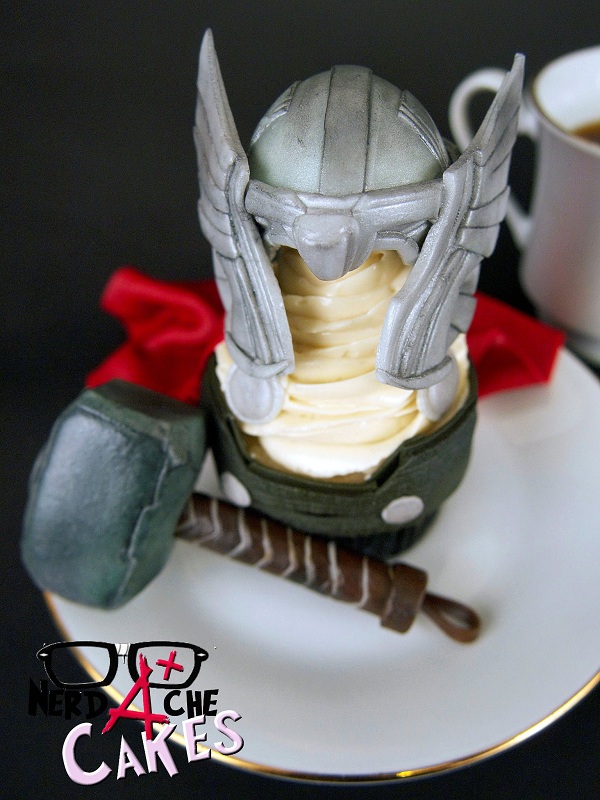 The superhero Thor is known for his winged helmet and power-wielding hammer, which Nerdache Cakes so brilliantly captured in this amazing cupcake creation. The incredibly detailed fondant-sculpted helmet provides a tremendous impact on this marvelous cupcake. 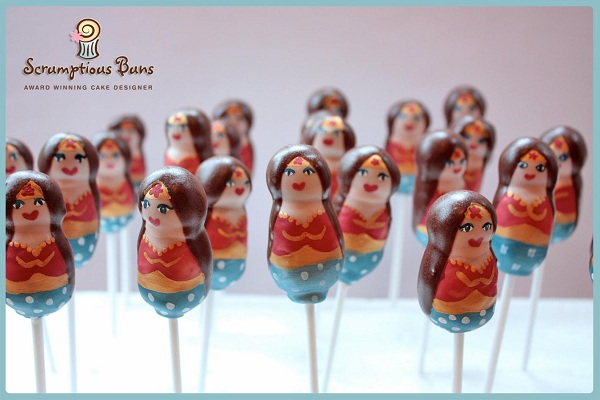 Many superheroes are known to protect and save the damsel in distress, but the female heroes that protect others are not to be forgotten! Scrumptious Buns certainly did not with these adorable Wonder Woman cake pops, decorated so intricately with candy melts. 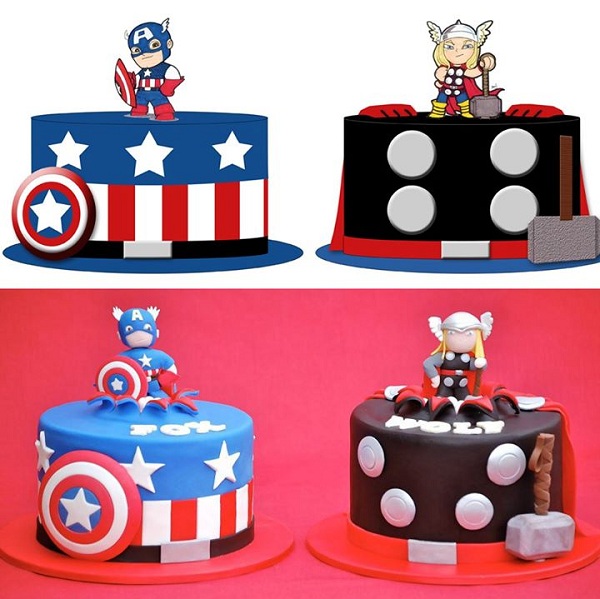 Photo via The Royal Bakery

Cake artist and fellow Bluprint blogger Lesley of The Royal Bakery created these unbelievable Captain America and Thor cakes, highlighting the superheroes bursting out of each confection. Lesley shares the tutorial for the fondant burst that can be utilized in large cakes, as well as cupcakes with proportionate three-dimensional figures or replaced with fists punching through. You can also see the initial sketches for the design of the cake created via a computer program versus the final product in cake form, demonstrating the benefits of pre-planning, along with the inevitable adjustments made during the process. 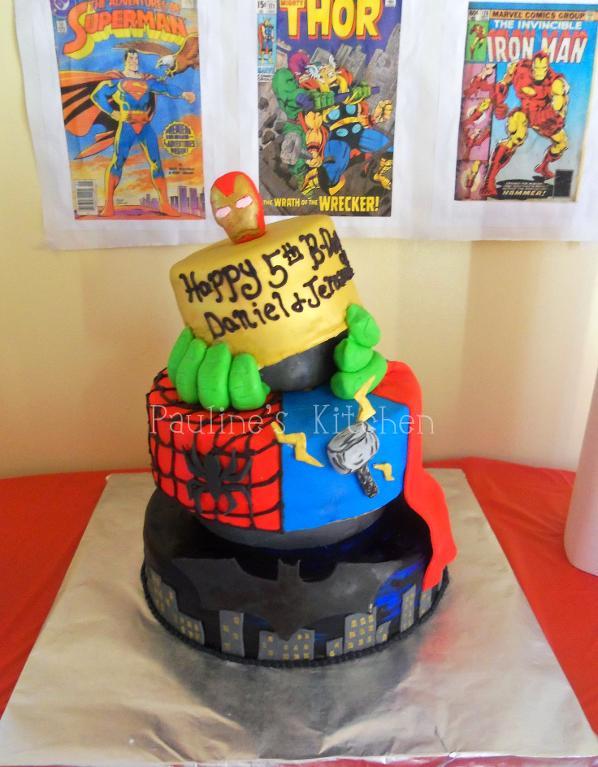 Bluprint member and cake artist Paulineskitchen created this incredible superhero cake after taking the course Topsy-Turvy Cake Construction with Richard Ruskell. Different superheroes are represented throughout the layers with their respective iconic designs, while the very top layer is constructed with the topsy-turvy effect, as the Hulk lifts it up.

How will you use your superpowers to decorate your next heroic creation?