I’m expecting my first child (a boy!) in December and I recently decided to try my hand at sewing maternity clothes. Truthfully, I haven’t been too interested in sewing for myself lately. For one thing, baby sewing projects have been a whole lot more fun, and they tend to be much faster. Plus, stretch is the name of the game when your belly is getting bigger by the day, and, admittedly, I don’t really love sewing with knits. But I’ve had a hard time finding maternity clothes that I like and that fit me well, so I decided to set aside my feelings for knits and get to work. 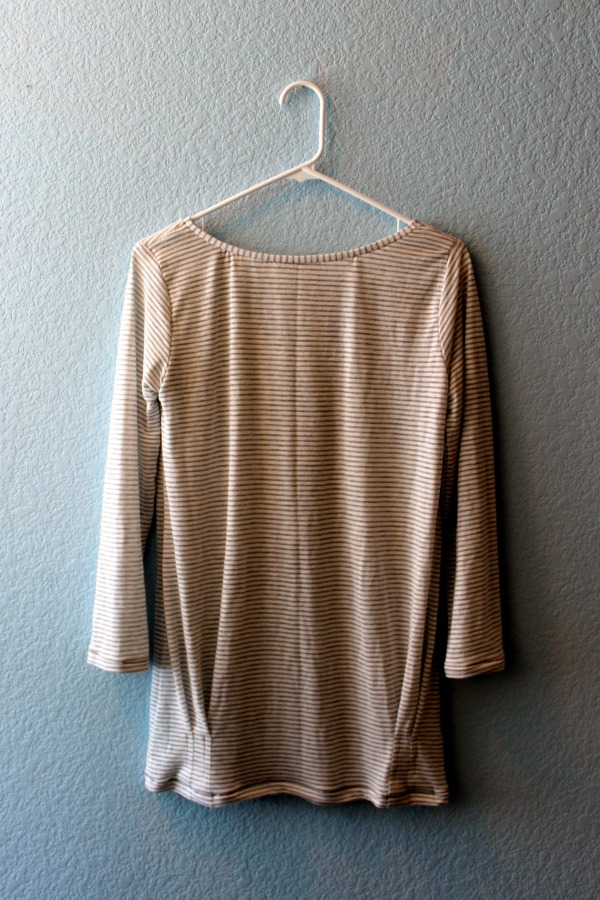 I chose Isabelle Maternity/Nursing Reverse Top pattern by Craftsy designer louloujames as my first maternity sewing project. I liked the pattern because it does double duty: it’s both a maternity and a nursing top. It’s worn with the pleats toward the front during pregnancy, and then flipped around with the zipper toward the front for nursing. There’s even a built-in camisole for a bit of modesty.

I don’t own a serger and I was able to sew the top on my sewing machine. I used a ballpoint needle and played around with some scraps before I began sewing. I found that a narrow zigzag stitch worked well for my fabric; my stitch width was set to 1.5.

Here’s how to sew a maternity top: 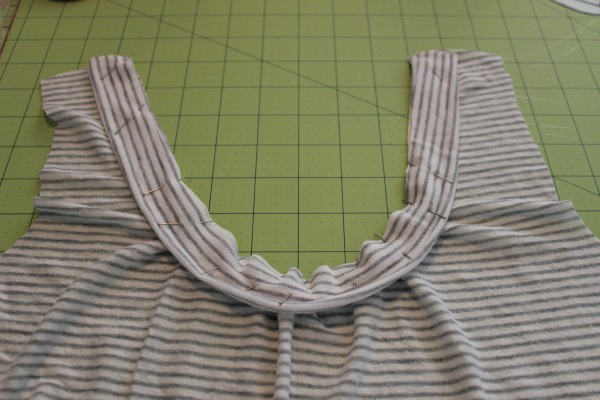 Fold the camisole neckband in half lengthwise. Pin to the camisole, right sides together, matching the center notch and shoulder lines. Stretch the neckband slightly as you pin. Sew a 5/8″ seam allowance.

Note: the pattern calls for a 1/4″ seam allowance, but I wanted the neckband to be much thinner. I also found that sewing with a larger seam allowance along the neckline reduced puckering issues. 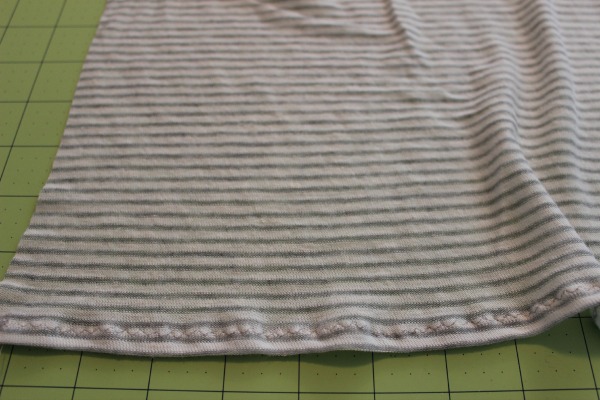 Turn up the camisole bottom and sew a 1/2″ hem. 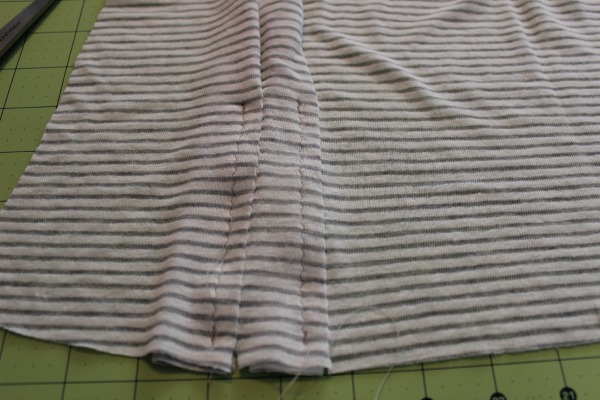 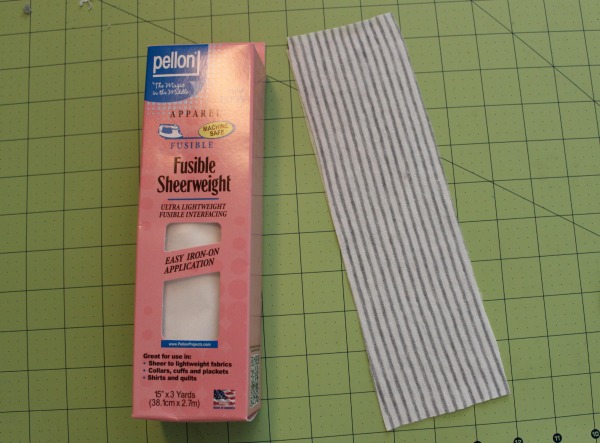 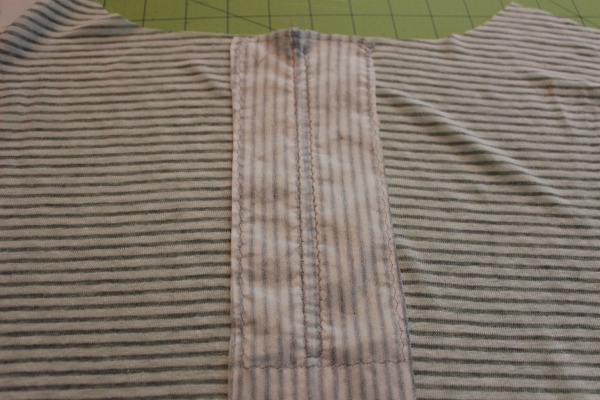 Mark the zipper opening length on the center front using chalk or basting stitches. Make sure you have a straight line, as you’ll be using it as a cutting line. With right sides together, center the facing over the marked line. Sew 1/8″ on either side of the center line marking and across the bottom of the facing. 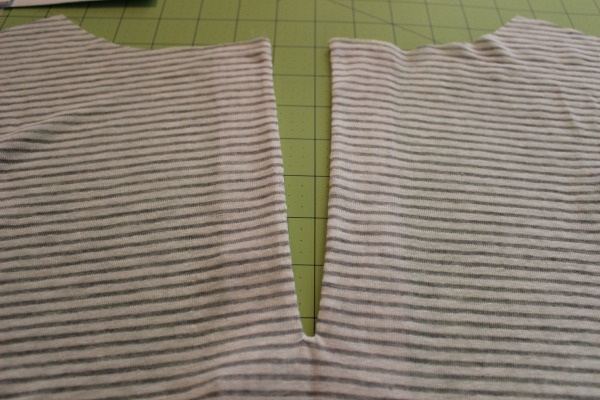 Cut down the center of the stitching line to within 1/4″ of the lower stitching. Cut diagonally into the corners. Turn the facing to the inside and press the seam edges. 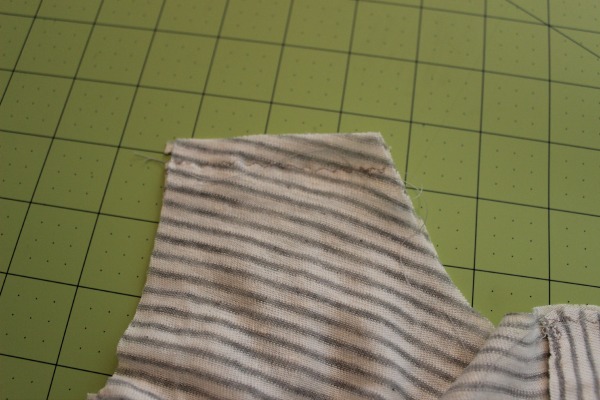 Layer the front and back pieces right sides together, with the camisole in between (the front of the camisole should be facing toward the wrong side of the front piece). Sew a 1/2″ seam across the shoulders. 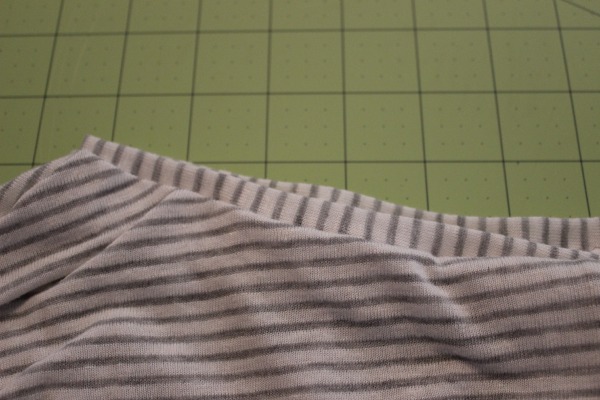 Fold the neckband in half lengthwise and pin, right sides together, around the neck. Match the notch at the center back. Sew a 5/8″ seam. (Again, I used a larger seam allowance so I would end up with a smaller neckband). 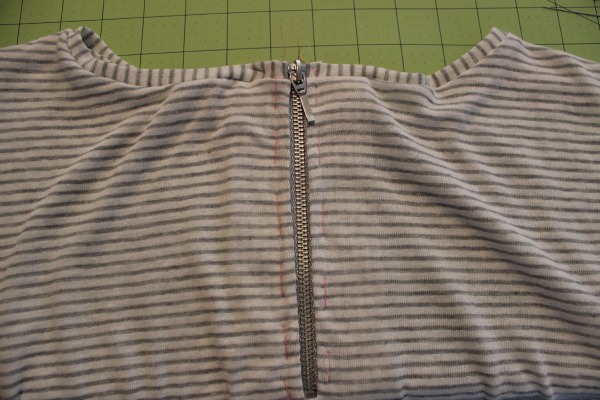 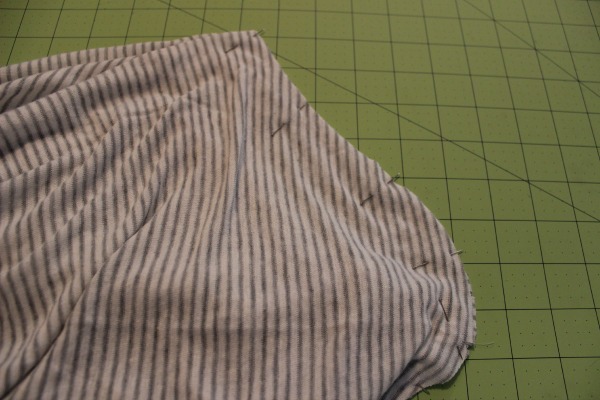 Pin the sleeves to the armholes, right sides together, matching the notch on the sleeve to the shoulder seam. Make sure the camisole front is facing toward the wrong side of the zipper. Sew a 1/2″ seam around the armhole. 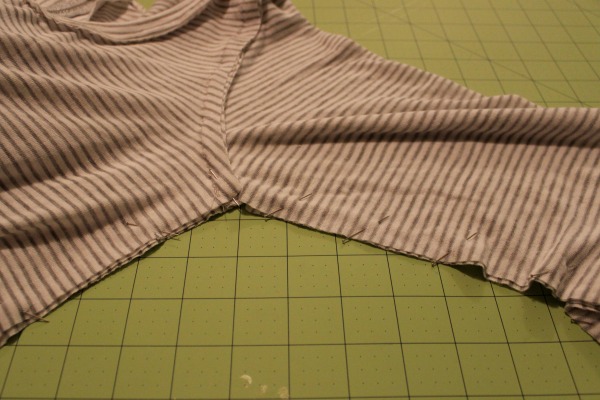 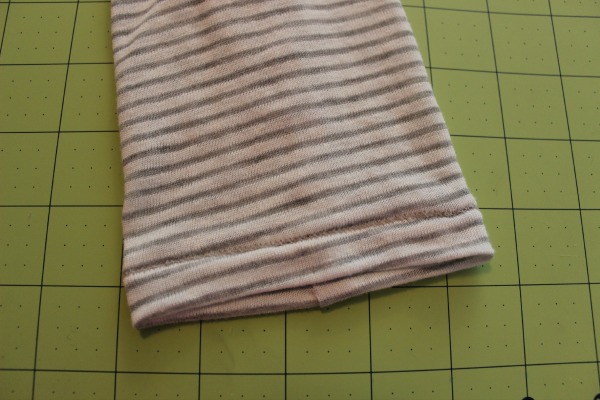 Turn the sleeve and shirt bottoms up and to the wrong side. Sew a 1″ hem using a double needle.

1. Get over your fear of knits.

A few basic tips and tricks for sewing knits will help. Another option is to take a look at Sewing With Knits with Meg McElwee.

I’ve found that I have a harder time being on my feet for a long period of time than I did before I was pregnant. If you’re cutting out a pattern with a lot of pieces, take a break every half hour or so and put your feet up.

Baby brain is, as far as I can tell, a very real thing. For whatever reason, I’ve been making more silly mistakes, and unfortunately, it’s usually when cutting. Not a big deal when I have plenty of leftover fabric, extremely frustrating when I don’t. So measure or double check yourself a couple of times, especially when your fabric is at a premium (or really expensive).

Have you completed any maternity sewing projects? Please share any favorite maternity or nursing sewing patterns in the comments!