At one time or another, each of us has thought about taking a self portrait. Not a typical cell-phone selfie — I’m talking about a good, possibly even studio-quality photograph of yourself. Everyone needs a photo that took a little more thought and effort than holding your cell phone at arm’s length away. 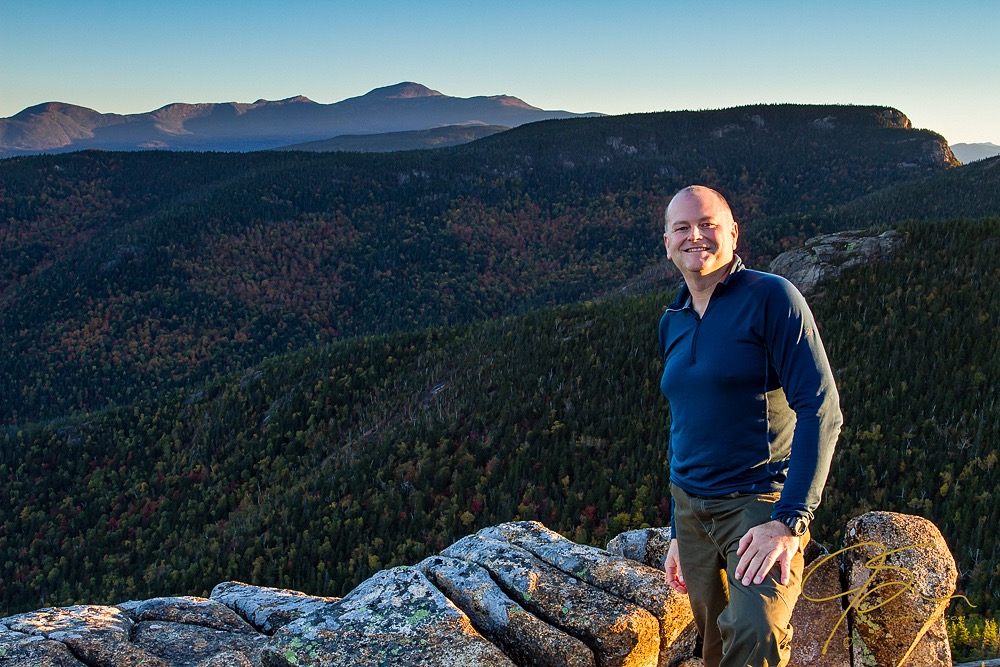 Learn the basics of self-portrait photography for to take a “selfie” with professional flair.

Probably the easiest way to get started making better self portraits is to just set up your camera when you’re out doing something that you enjoy. For me, that’s hiking and backpacking. And since I always bring my camera and tripod with me, I can set up my camera wherever I want.

Once you’ve decided on a location, you’ll need to frame your photo, and the best way to do this is with your camera on a tripod. Decide where you want to sit or stand and make a mark on the ground or note in some way where to stand. Then lock in that composition.

The hardest part of taking a self portrait is focusing. Achieving good focus takes a little trial and error. Focus on an object in the frame that’s roughly on the same focal plane as you’ll be positioned.

I select a smaller aperture than I would normally use, which gives me a little cushion when it comes to focus. The idea is that the increased depth of field created by using the smaller aperture will make up for slight variations in where you stand in relation to where you focused.

Of course, to take the shot you need to press the shutter. If available for your camera, a wireless remote comes in very handy. However, I just use the built-in timer. Using the 10-second setting should give you plenty of time to get yourself into position.

How to add lighting for a more professional look

Now that you know how to take a simple self portrait using natural light, it’s time to move on and take more control of the light. Just like in any professional photo studio, the trick to getting a really good portrait is controlling the light.

For the photo below, I set up my impromptu photo “studio” in the dining area of my house. I used two speedlights. One (a Canon 600EX-RT) was on a light stand about 2 feet from my face, approximately 45 degrees camera right and pointing down at me at about 45 degrees. The other flash (a Yongnuo 600EX-RT) was on a stool behind me; it fired into the black bed sheet I used as a background. The flash behind me (optional) was used to create a little separation between me and the background. I added a red gel over the flash to give the background a small splash of color.

To keep things simple with the flash (and because I’m only just starting out with auxiliary lighting in my photography), I’ll set the flash to ETTL mode and take a test shot to determine if I need to adjust the amount of flash using flash exposure compensation. 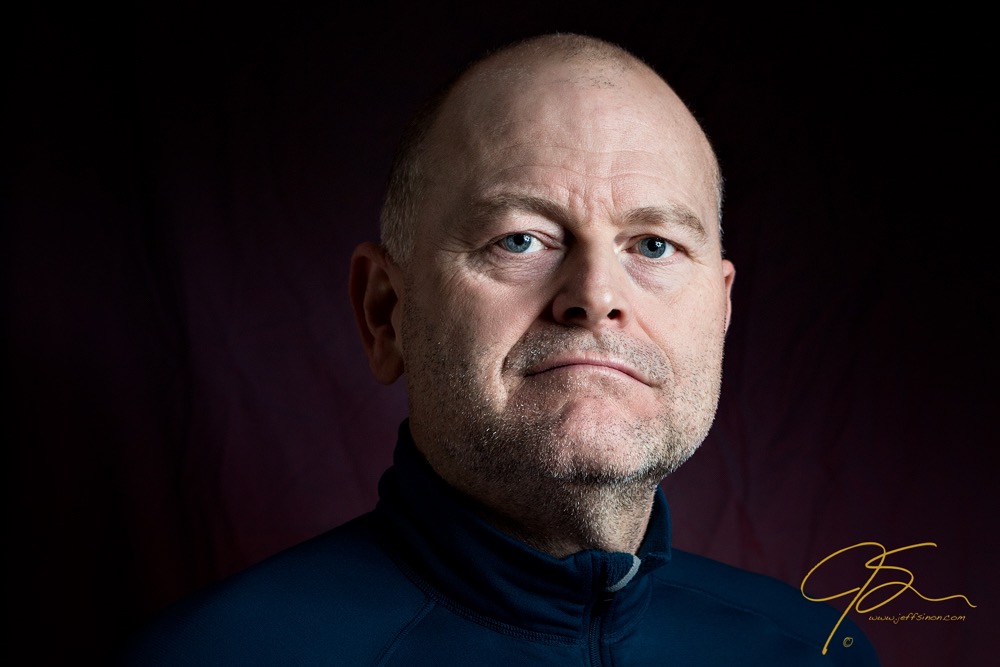 Both flashes were triggered wirelessly from my camera using a Yongnuo YN-E3-RT controller. A word about the Yongnuo flash and trigger: They’re nearly identical to Canon’s flagship 600EX-RT flash and ST-E3-RT trigger, but much less expensive. Yongnuo’s devices are good options for new for a photographer on a tight budget wanting to invest in portable off-camera lighting.

When it came time to set focus for this shot, I was able to enlist the help of my daughter, who isn’t always a willing assistant. If you don’t have an assistant, willing or otherwise, to help you set focus you can put something in your place to focus on, like a house plant. Use your imagination, as long as what you use can be easily seen and will allow your camera to focus. 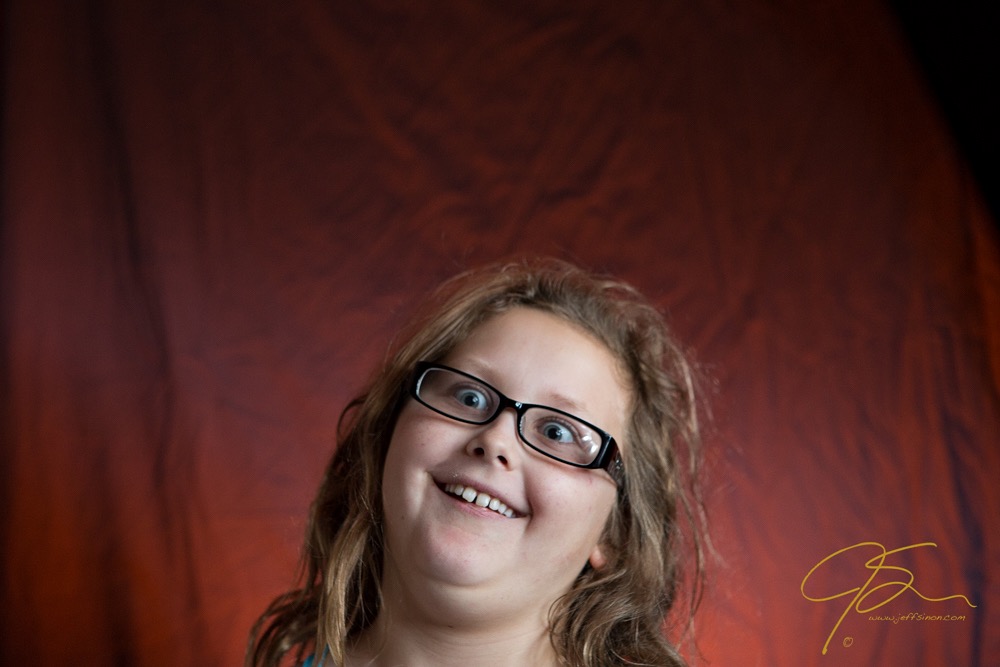 Here’s a diagram of the setup in my dining room “studio.” 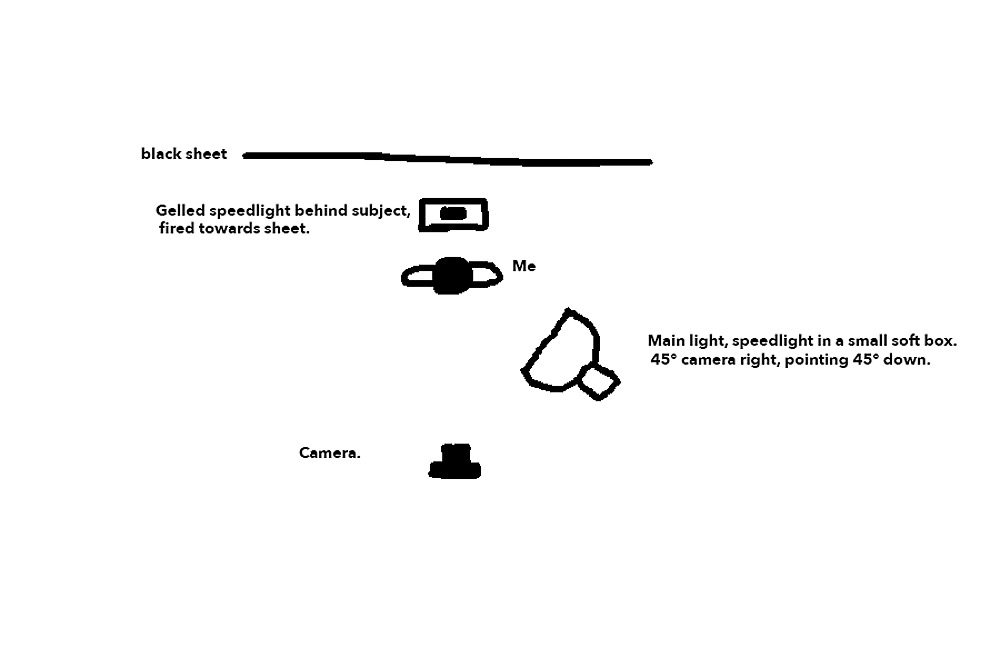 This setup, minus the backdrop and the second flash behind you can very easily be moved outside for an outdoor portrait too.

Had it been a nice sunny day when I made this self portrait, I could easily have substituted the main light camera right with a reflector (store-bought or a piece of white poster board will do) and achieved similar results.

As you can see, making better-than-selfie self-portraits is pretty easy and requires minimal (if any) additional gear beyond what you may already own.