Ahoy, me hearties! Though real pirates are not good guys (to say the least), pirate themes continue to be an extremely common request for cakes and parties, especially with the popularity of classic stories such as Peter Pan, as well as Disney’s Pirates of the Caribbean and Jake and the Never Land Pirates.

In concurrence with International Talk Like a Pirate Day on September 19th, ye be inspired by these cakes, cupcakes and sweets that would make any swashbuckler happy to walk the plank! 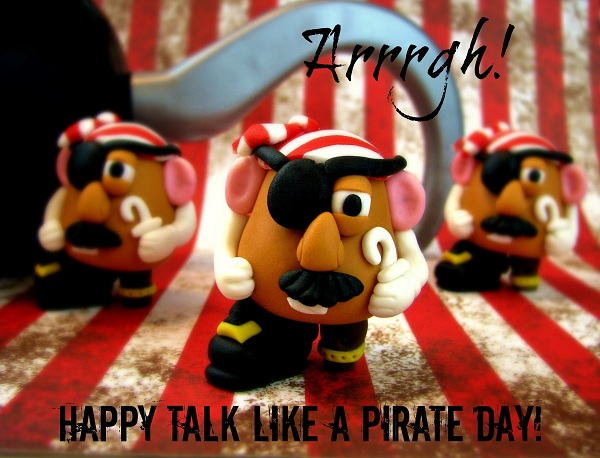 These fondant pirate spuds were created to match back to the adorable artwork by Piggy Bank Parties for Dreamin’ N Details‘ “Mr. Potato the Pirate” party. The three-dimensional figure of the classic children’s toy got a makeover with the addition of traditional pirate garb, including a striped scarf, an eye patch and a peg leg.

Tip: When making fondant figures such as these, the use of an additional support (such as a piece of raw spaghetti) will help provide structure when you are adding limbs (such as the pirate’s shoe and wooden leg), thus helping to hold them in place. Make sure you allow these fondant pieces to dry thoroughly to make a good foundation for the remainder of the body. 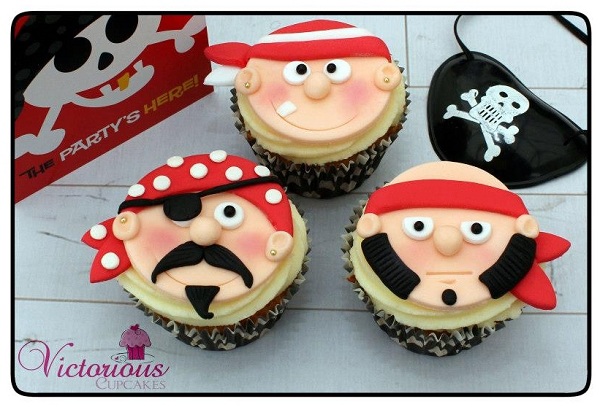 Victorious Cupcakes made these incredibly cute and captivating fondant pirate toppers by creating  two-dimensional faces and adding characteristics to each one. The tutorial at Good to Know Recipes demonstrates the ability to easily change their expressions with modified details to build your own band of misfit pirates. 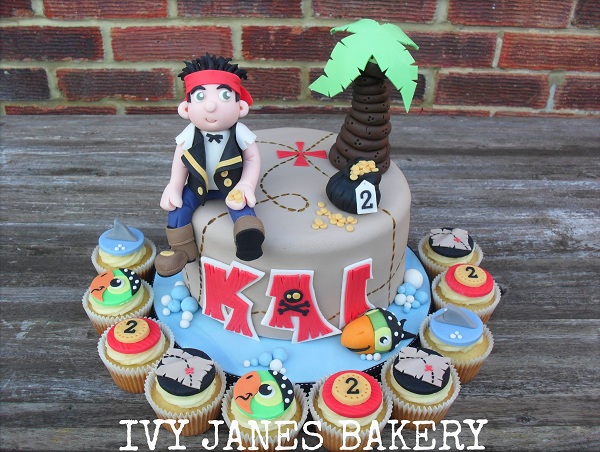 Kai and the Never Land pirates:

With the popularity of the Disney television show Jake and the Never Land Pirates, the milder buccaneer characters reach an even younger audience, while strengthening the demand for pirate-themed sweets. Ivy Jane’s Bakery did a tremendous job capturing the essence of the animated personalities with this playful cake and cupcake set. The flawless three-dimensional fondant figures (a pirate and a palm tree) sit upon the cake, while additional details, such as pirate maps, gold coins, parrots and shark fins, adorn the cupcakes. The texture in the letters resembles wooden planks, adding the perfect touch to the presentation. 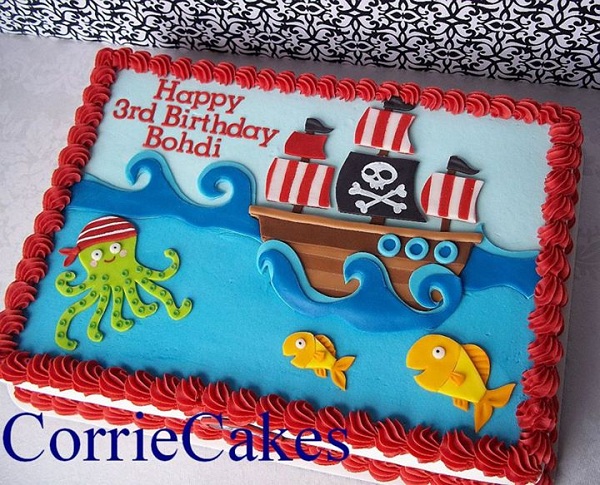 Pirates on the high seas:

Some cake decorators tend to stay away from sheet cakes for fear of their simplicity, but CorrieCakes does a phenomenal job of adding dimension and bringing her gorgeous cakes to life with the blend of buttercream and fondant accents. This pirate-themed cake is incredibly detailed, from the fondant pirate ship and waves to the sweet sea life, making this sheet cake stand out from the rest. 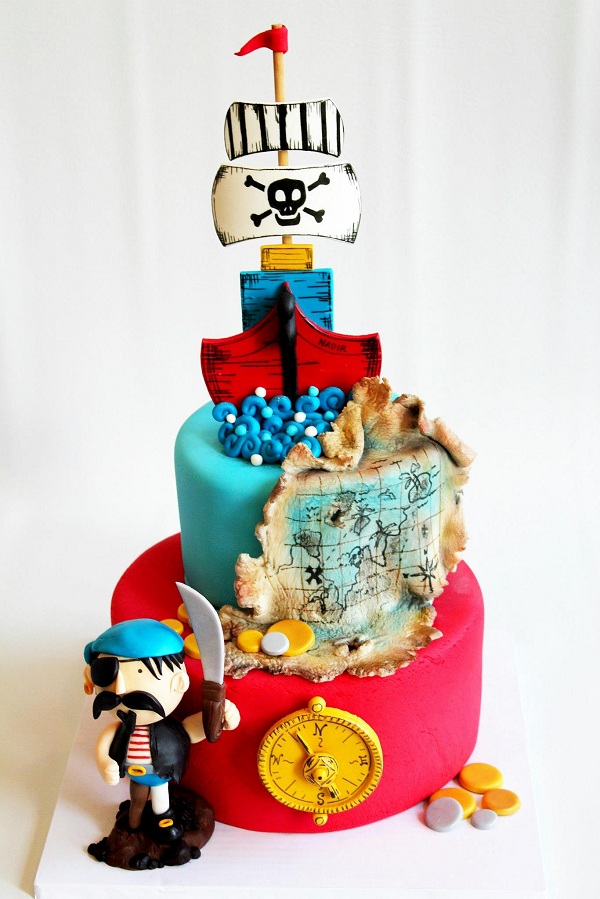 This two-tiered pirate cake by Man Bakes Cake is absolutely breathtaking and whimsical. The pirate figure is charming and the unconventional use of the blue accents on his costume blend perfectly with the details on the cake. The juxtaposition of the gritty, antique texture of the map against the clean fondant-covered cake adds dimension and catches your eye. The remaining details are finished off with edible ink and painted accents. 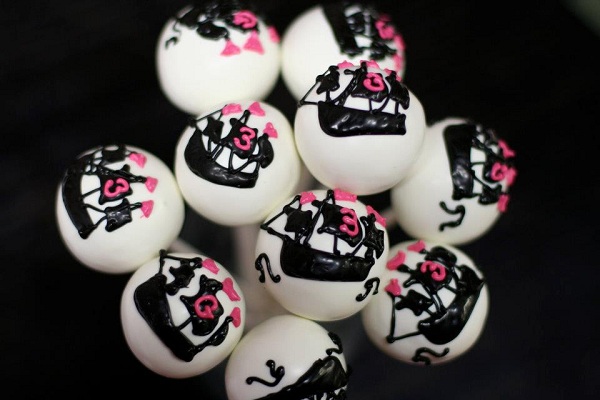 Pirates aren’t only favored by boys, but continue to be a trending theme for girls as well! While the traditional colors can be utilized for any gender, the infusion of pink for the more feminine pirates makes a big impact, as seen on these fabulous cake pops by Sweet Lauren Cakes. The silhouette of the pirate ship is piped onto the cake pop with chocolate. The mere addition of pink flags and accents make it perfect for a glam pirate ready to sail the seas in style! 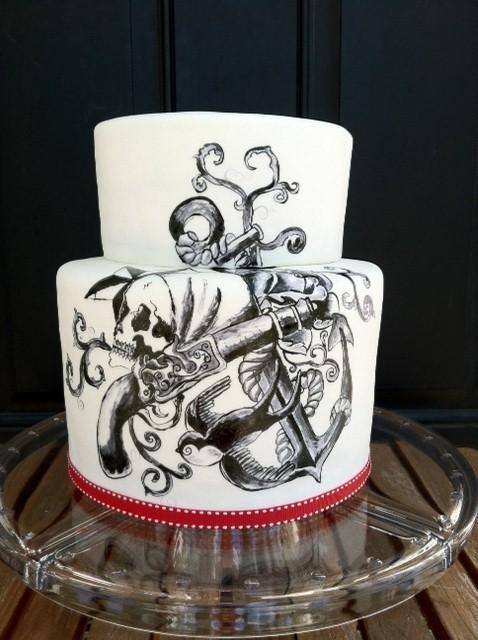 This incredible cake was originally created for a baby shower, but it would certainly please pirate enthusiasts of any age. This inspiring ganache-filled cake was covered with fondant and decorating using unique cake painting with black color gel mixed with vodka. 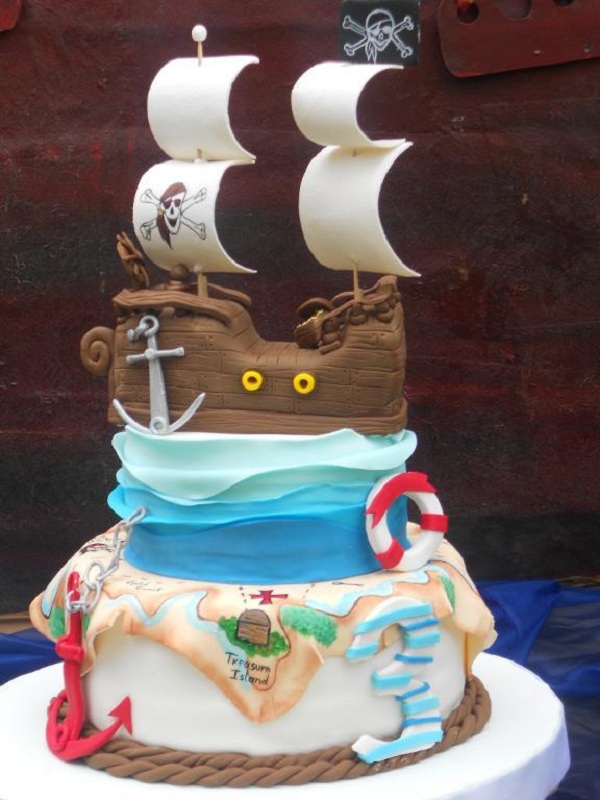 This cake artist did an amazing job incorporating many different techniques and embellishments to this beautiful pirate cake. The waves were achieved with the ruffle approach once completing Maggie Austin’s Fondant Frills. The addition of the painted treasure map, the woven rope and the three-dimensional ship complete the overall look that any pirate would love.

Learn how to re-create this look with our fondant waves tutorial. 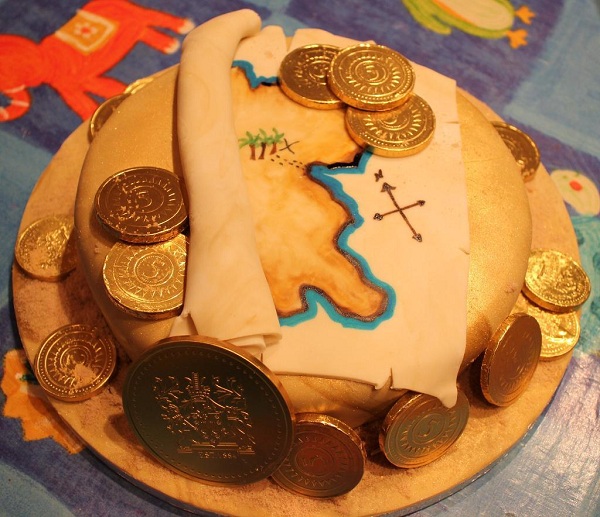 This simple, yet impressive treasure map cake was designed and inspired by a picture. The map was created from fondant and the details were painted on with various soft gel colors. The cake was accentuated with brown sugar and finished off with chocolate gold coins to entice the treasure hunters. 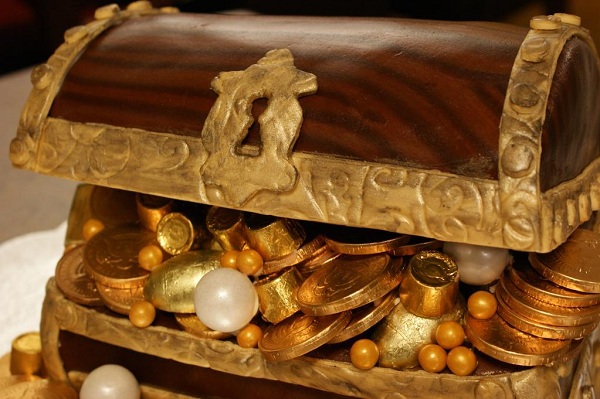 No pirate party is complete without a treasure chest, and this cake makes the perfect centerpiece! The cake artist did a tremendous job achieving the woodgrain effect on the chest and utilized gold powder with which to paint the trims and accents. Gold coins, chocolate and fondant pearls bursting out of the chest are ready to be pillaged!

Learn more about modeling people and pirates in the class Cake Topper Techniques: Figure Modeling with Anne Heap. And hone your cake-sculpting skills to make pirate ships and treasure chests in Cake-osaurus Rex with Catherine Ruehle.

Now batten down the hatches and prepare ye to create yer own pirate confection! Which pirate project are you going to try?