Bra making in the sew-at-home DIY crowd has reached an all-time peak. As indie pattern designers offer more patterns and supply shops sell more incredible laces and notions direct to consumers, sewing your own bra has become easier than ever. As accessible as it has become, there are still a lot of elements, details, and pieces to bras, which can feel incredibly intimidating. 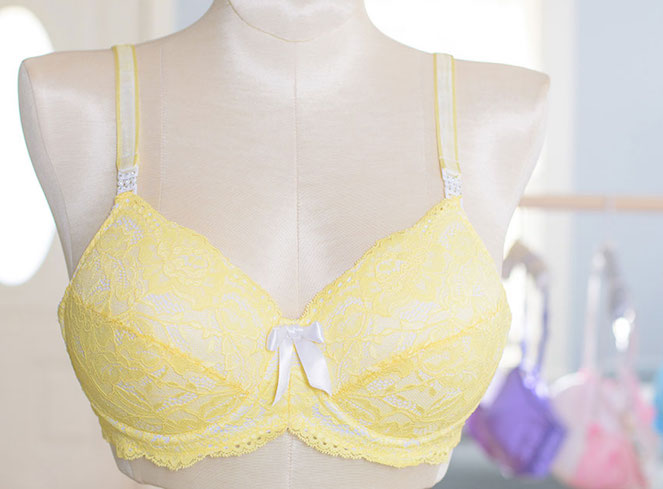 The best place to start is by understanding the parts of a bra you’ll need to construct.

I’ve broken down all the key parts to a bra so you can learn your bridge from your band, hopefully making the notion and fabric gathering a little less confusing.

It is important to note that, just like with any garment, there are hundreds of styles of bras, so not all bras will look just like the one I have drawn for this article. But it’s a good starting point for understanding the lingo involved with bra making. And if you really start to feel overwhelmed, remember that Craftsy has some quality classes on bra making if you feel you would benefit from watching each step done first hand by an expert!

The parts of a bra 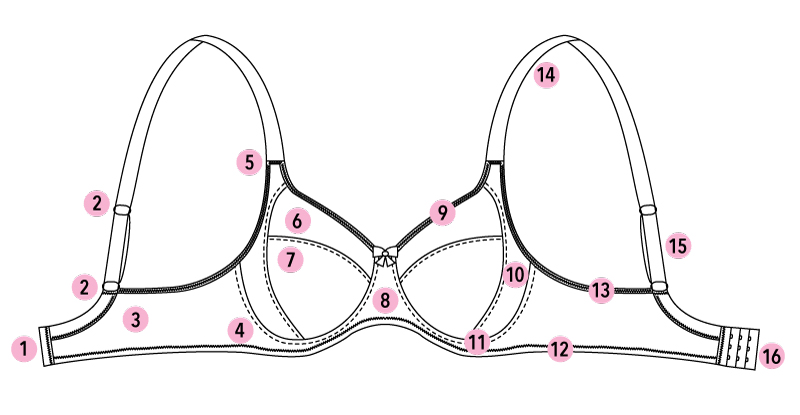 The hooks link into the eyes (16) to close up the bra at the center back. These are most often found in one, two and three rows tall. There’s usually a closed end on one side and an open end on the other, allowing it to slide around the fabric at back of the bra to then be sewn in place.

Typically placed at the back, though sometimes moved to the front, these join the strap front (14) to the strap back (15) and allow the wearer to adjust the straps to fit their body comfortably.

The wing/band wraps around the torso and provides a snug fit between the cups (6, 7, & 10) and the hooks and eyes (1 & 16). It’s critical that the wing/band be sized correctly and have the right amount of stretch for a proper fit.

The apex is the point where the cups (6, 7, & 10) join the strap front (14). Some bras connect by being sewn together directly, where others are joined with a decorative ring.

The upper cup, the lower cup (7), and the power bar/sling (10) together make up the complete cup. The seams in bra cups can vary a lot, depending on function and style preferences. Some bras have seams in the cup (like I’ve drawn), some have darts and some are molded and seamless. Those with seams have an upper cup. Sometimes this is finished at the neckline (9) with elastic, and other times this portion of the bra is a place to use some decorative detailing like scalloped edge lace. It’s a focal point of the entire bra.

The lower cup is sewn into the upper cup (6) and to the power bar/sling (10) to form the complete cup. This area provides support for the bust and sometimes contains foam for a push-up effect. When the bra has no frame (4), the lower cup and underwire (11) become the lowest portion of the bra.

The under band is the lowest-most portion of the bra, along the bottom edge of the wing/band (3) and frame (4). This edge, much like the neckline (9), is either finished with elastic or decorative lace.

This span of the bra, most often finished with elastic, spans the distance between the apex (5) and the strap back (15) and fits snug under the arm on your body.

The strap front is the portion of the strap that spans the distance from the apex (5) to the adjustment rings and sliders (2).

The strap back is the portion of the strap between the strap adjustment rings and sliders (2), connecting the strap front (14) and the wings/bands (3).

The eyes link into the hooks (1) to close up the bra at the center back. Just like the hooks, the eyes are commonly available in one, two and three rows tall, and are sewn in the same method.