Beautiful and intricate, mehndi is a 5,000-year-old form of temporary body art. Originally an important part of Middle Eastern weddings and religious ceremonies, the lace-like henna creations have been transformed into hand and machine embroidery designs. 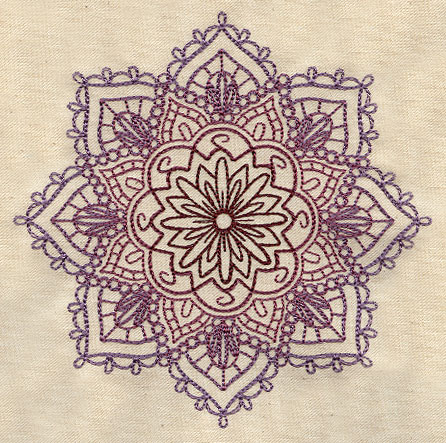 It is said that imitation is the greatest form of flattery. That is certainly the case with mehndi embroidery. Taken from the Sanskrit word “mendhika,” mehndi is the process of painting exquisite designs with henna, a sort of temporary tattoo.

Sanscrit is one of India’s many languages and one that is used in religious ceremonies associated with Hinduism, Buddhism, and Jainism. On Night of the Henna, mehndi is applied to the bride’s hands and feet. Often, other members of the bridal party also participated. In some instances, the artwork can take days to complete.

A bride whose family is not wealthy wears her mehndi instead of ornate jewelry. It also has been said that the darker the design, the more the bride’s mother-in-law loves her.

Inspired by mehndi art, these designs have Hindi names. Sundara he (left) means “pretty,” while Caru (right) means “beautiful.” Both of these machine embroidery designs are stitched in one color.

Get the Mehndi Butterfly Sundara he design (left) here. 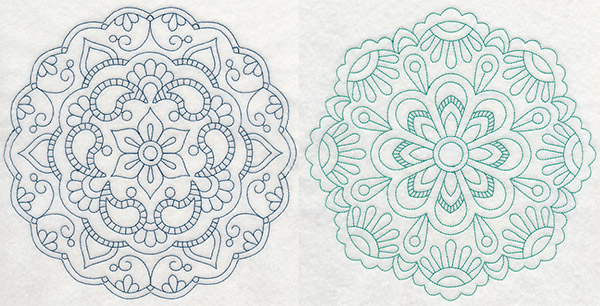 Photos via Kreations by Kara

Stitching on a dark background using four or five threads, some neon, produces stunning results with these henna designs. Alternately, you could use a variegated thread or stitch the entire sequence in one color.

Get the Henna Elements 12 design here.

Get the Henna Elements 2 design here. 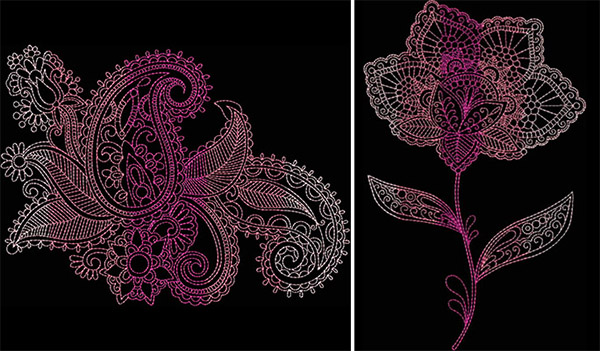 Photos via Kreations by Kara

Even though these designs use only three thread colors, two of them are neon. That adds a tremendous amount of dimension to the finished product.

Three thread colors are all it takes to stitch up these mehndi lotus designs. Patterns are also available for hand embroidery.

Get the Mendhika Lotus design here. 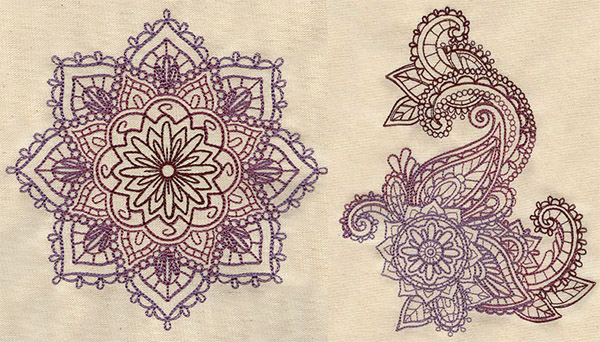 Medallions and paisley ornamentation are often found in mehndi art.

Get the Mendhika Medallion design here.

Get the Mendhika Swirl design here.