Have you ever watched a mime doing her thing? Leaning against something that isn’t there. Picking flowers that don’t exist. If she is doing it right, you can start to believe the things are just invisible. Through exaggerated actions and facial expressions, the mime is telling you a kind-of story without words. 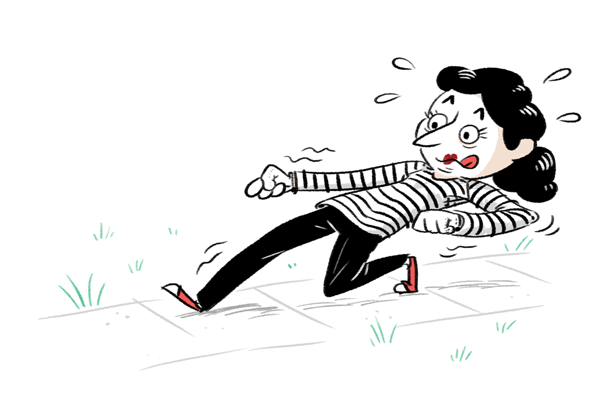 Let’s explore how to illustrate characters:

Characters in stories do things. In picture books or comics or animation, that means you, the illustrator, must draw the characters doing those things. On a model sheet or character sheet, you can show basic angles and postures and expressions of a character you have come up with, but you can also begin showing key props and costumes that distinguish the character. And once you begin drawing the actual story, if your character always swings a hammer, or if they rely on a wheelchair, or maybe they crawl everywhere, you have to go beyond a a basic face-and-costume design and show the characters in situations where they are likely to be placed.

In a previous post about character design, I introduced Jemma, a girl from a story I have written. At one point in the story, Jemma is turned into a pigeon by a witch, so I started my design for her by drawing pigeons. Besides the fact that pigeons are just fun to draw, I wanted to make sure that once Jemma became a pigeon, the reader would recognize her because of similar designs, colors and costume details.

Now that I have figured out her basic shapes and features, I need to think about how she will fit into the story as a fully-realized character. She has weight and volume and emotions and personality, and all of these things, plus physics and gravity, affect how I will draw her.

The illustrations in a picture book have the opportunity to try and stand alone, to a certain degree, without the text. There are a lot of “readers” of picture books who can’t actually read yet. A Mona Lisa-esque smile won’t convey “glee” or even “happiness” to a two-year-old, but Sally Brown’s exaggerated googly-eyed smile would tell anyone how thrilled she is to see Linus.

It’s not always appropriate to pull out all the stops for every smile, tantrum or catastrophe, but the clarity of an emphasized pose or facial expression will push your storytelling along. Here, I’ve taken a moment from my story where Jemma is surprised by actual mud in her mud pie. First I can show her shock and confusion. A little is good, but more leaves nothing to question. 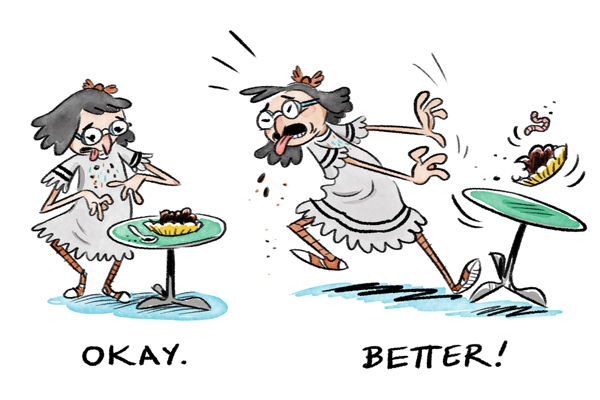 Then I can show her anger — no, RAGE — at her friend for feeding her the mud pie in question. 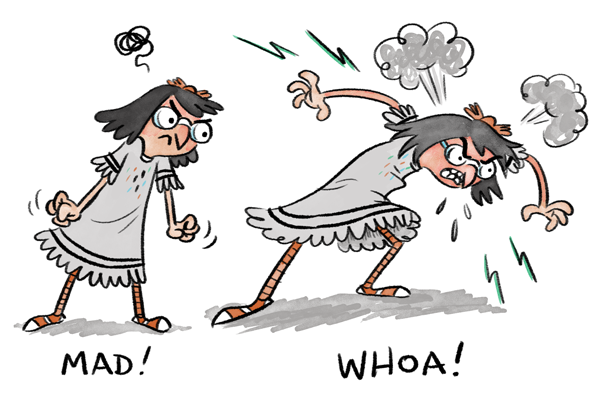 The best way to employ hyperbole is to push the pose or the expression as far as you can stretch it — near the breaking point — and then dial it back down to where it fits the story correctly.

I swiped this idea from the world of animation. A good character pose shows a fluid line through the whole character. And the right fluid line to use is one that accentuates the motion or emotion you are trying to depict.

Walking is actually a controlled fall, so your character has to lean into a walk. 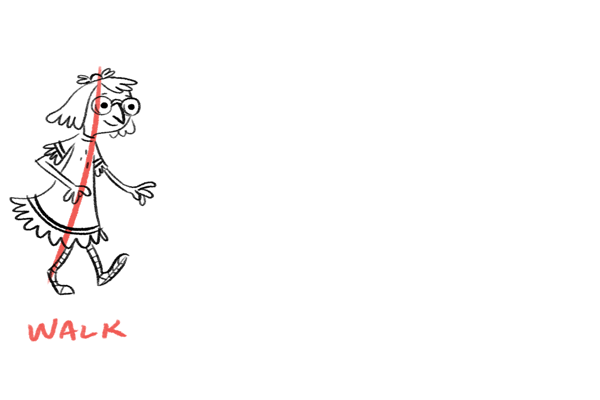 Running is faster, so the lean is more pronounced. 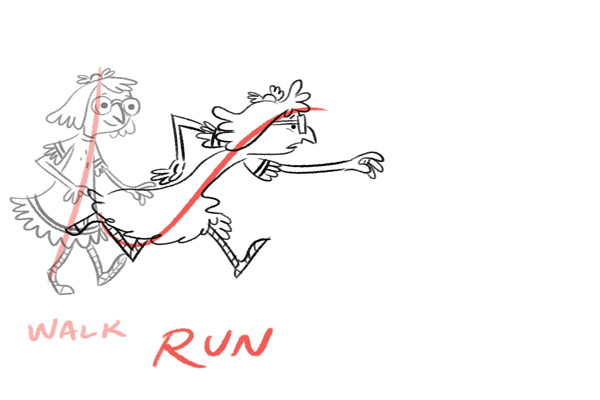 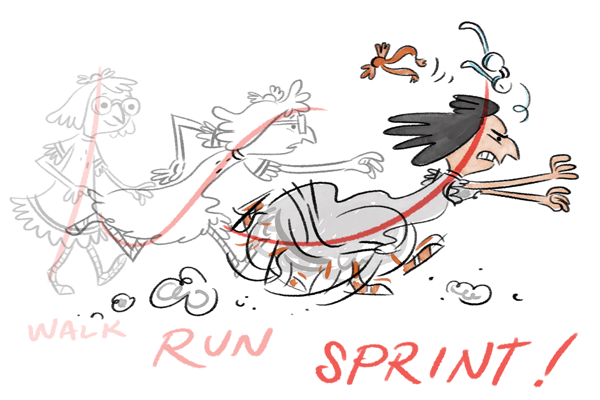 It works for emotions, too. Here’s Jemma again, shocked and repulsed by the disgusting mud she has just eaten, and then she is furious with her friend for feeding her mud. With worms, even! 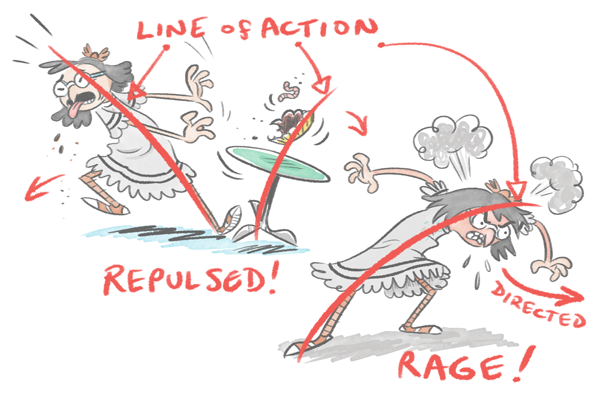 Mixing hyperbole with line of action can really pantomime the action in your story. Again, push it until it breaks, then tone it down until it works.

Another good idea from animation is the silhouette. My friend Bob Flynn created a lineup of character silhouettes from classic cartoons. A well-designed character is recognizable from just its silhouette. In animation, a well-made silhouette is critical because each drawing flickers by in just a fraction of a second, and the drawing must “read” quickly in the viewers eye. 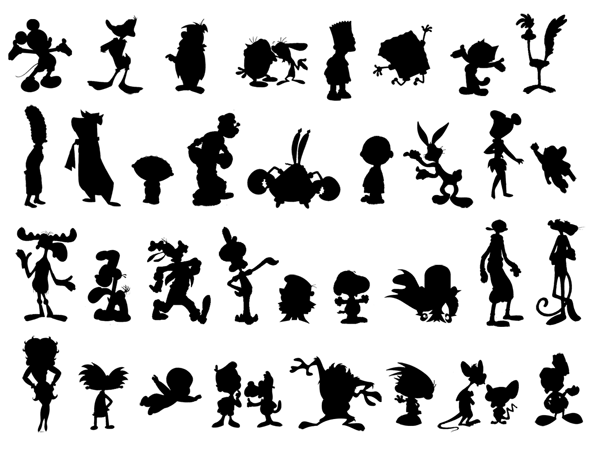 In a static illustration, a good silhouette isn’t as critical, because the reader has time to sit with the image and figure it all out. But if you are trying to show an important moment or express an action clearly, a well-crafted silhouette can only help.

To make your characters more plausible, even if they are sparkling three-headed unicorns from space, make sure they have volume and weight. One way to keep this idea close at hand is to think about gravity. How does it affect the way your character is standing? If they are holding something heavy, how do they have to shift their posture to balance the extra weight? 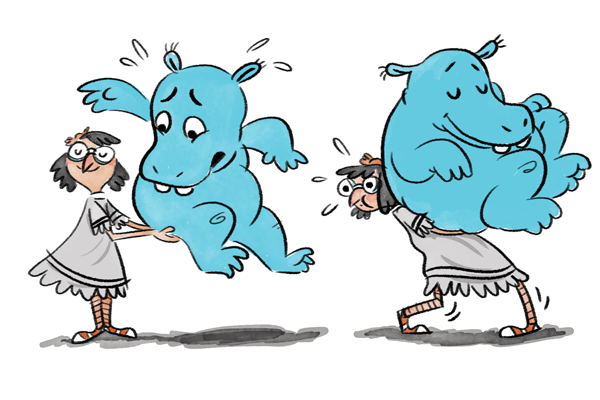 If you are having trouble imagining gravity, try standing up and mimicking the pose you are trying to draw. Hold something heavy and see how you shift your weight to accommodate. Lean against your desk and watch how your weight redistributes between your feet and hands and other points of contact. If you have a big mirror, you can stand in front of it to see the changes. You can also use your computer’s camera and take photos of poses or facial expressions. There is even a blog that collects these silly photos.

Note: With these and any “rules,” there are always exceptions. Just be sure to know what your priorities are, and break the rule for a good reason. After all, a confusing silhouette is just the thing when you are drawing a duck-rabbit. 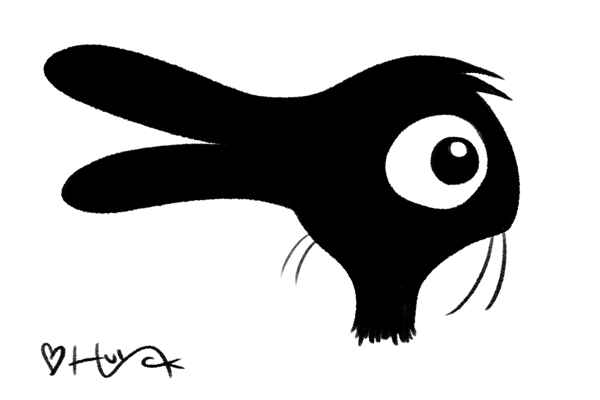 Bring your creativity to life with an illustrated story! Learn techniques to make a picture book that will delight children & publishers alike with Shadra Strickland’s The Art of the Picture Book.

Now that your characters are coming to life, what story with they help you tell?