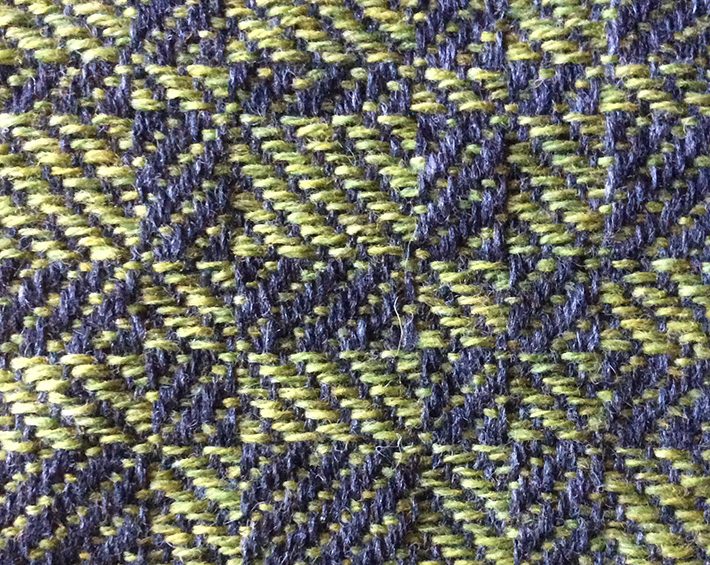 Now let’s get some creative inspiration.

Turned twill consists of blocks of twill woven alternately as warp-faced and weft-faced. The eight-shaft tie-up looks like this: 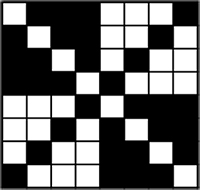 Notice the ‘clean break’ where the blocks meet: a raised shaft in one block is always next to a lowered shaft in the other block.

As with the shafts, the tie-up can be treated as two separate groups, which can each be repeated as often as desired. You might choose to match the treadling to the threading as in the following example: 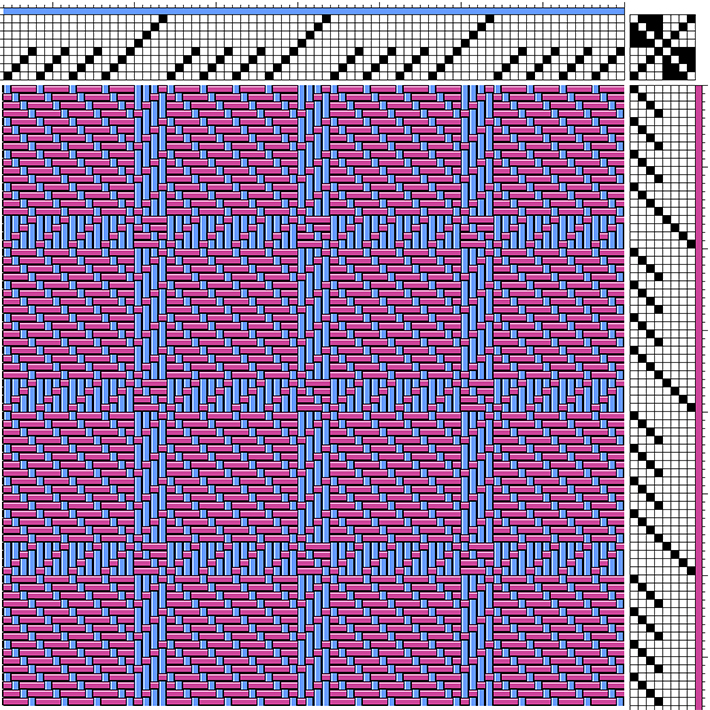 It is fun and easy to design your own patterns, but you can also turn to other resources – such as profile drafts for Monk’s Belt – which are based on two blocks.

2. Getting clever with color

No sooner does a weaver have two blocks at her disposal than she is wishing for three or four… Well, this trick won’t add shafts to your loom, but it will give the illusion of a more complex pattern.

You can, of course, thread each block in a different color to add a striped or checked effect to your turned twill. But to maximize the impact of your color changes, make them out of step with your block boundaries. Here’s an example: 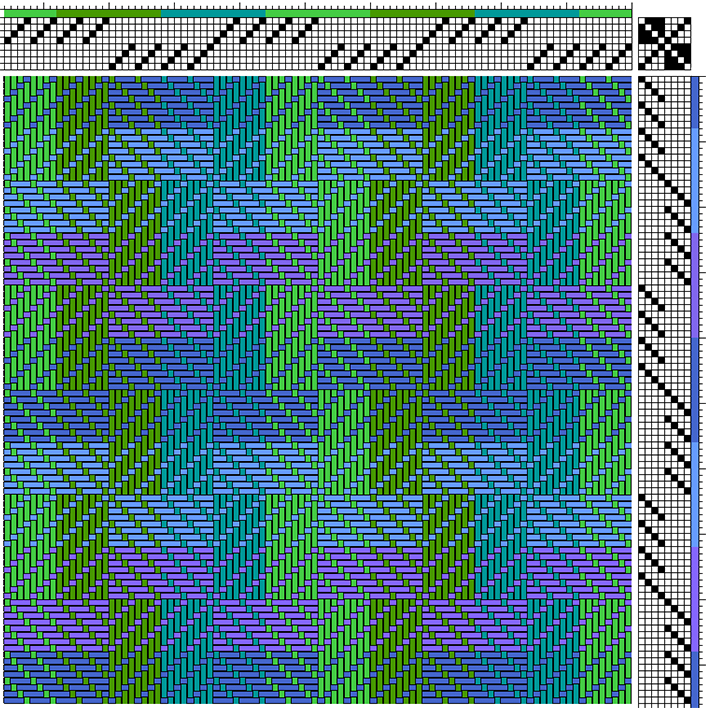 My threading consists of 16 ends in each block. I have used three colors in my threading, but I have started with only 8 ends of the first color. Thereafter, each color stripe of 16 ends overlaps two blocks. If I continue to follow this sequence it will take me six blocks to get back to the beginning of my pattern. Using another three colors in the weft makes a total of 18 color blends, which are combined here in 36 different blocks!

Of course, we can be a little more restrained than that if we wish. The scarf shown in close-up below uses four colors in the warp – a gray, two blues and a red. A solid dark blue weft creates a whole range of subtle blends set off by the jaunty red stripe. 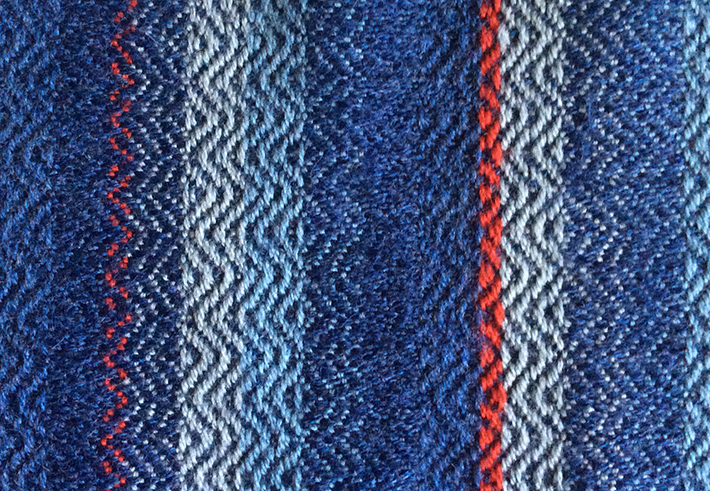 If you look again at the scarf sample above, you will notice that the weft-faced areas tend to look indented while the warp-faced areas stand out. You can deliberately emphasize this effect by choosing a very fine weft yarn (relative to the thickness of the warp yarn) or by using an over-twisted yarn as weft. On the loom the fabric will weave as usual, but when you come to the wet finishing you will have the pleasure of seeing – and feeling – the transformation as your cloth relaxes into soft pleats.

You can make the most of these pleats by choosing different colors for the two blocks so that the two sides of your cloth are quite distinct. The scarf below was woven in a broken twill using an over-twisted wool weft. It shows predominantly olive green on one side and violet on the other. 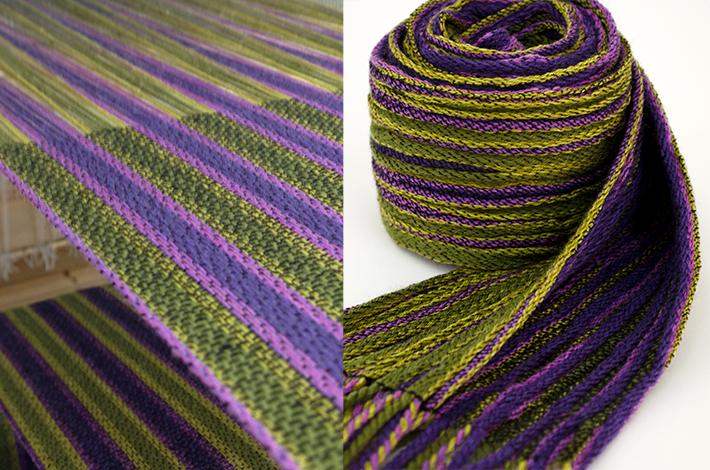 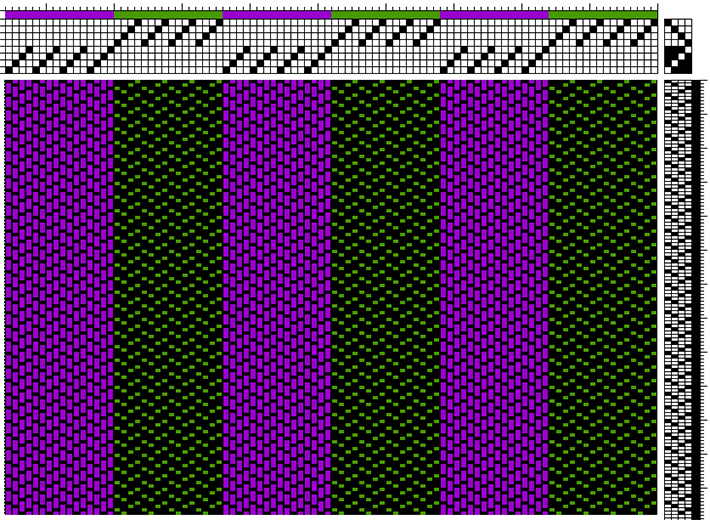 So there we are – three very different ways to use twill blocks, and we haven’t even considered the alternative tie-ups and treadlings you might use!