I wasn’t always a fan of mushrooms. I found their texture a bit squeaky, sodden and off putting. Back then they seemed to lack flavor and with that I found no point in their existence whatsoever.

Until I started to sample dishes where mushroom were the star. Somehow, they were cooked in a way that brought out a deep flavor, almost meat-like. They were rich, caramelized and intense. And, over time, I have found their flavor too hard to resist.

Here’s how to cook with mushrooms for hearty, earthy irresistible dishes! 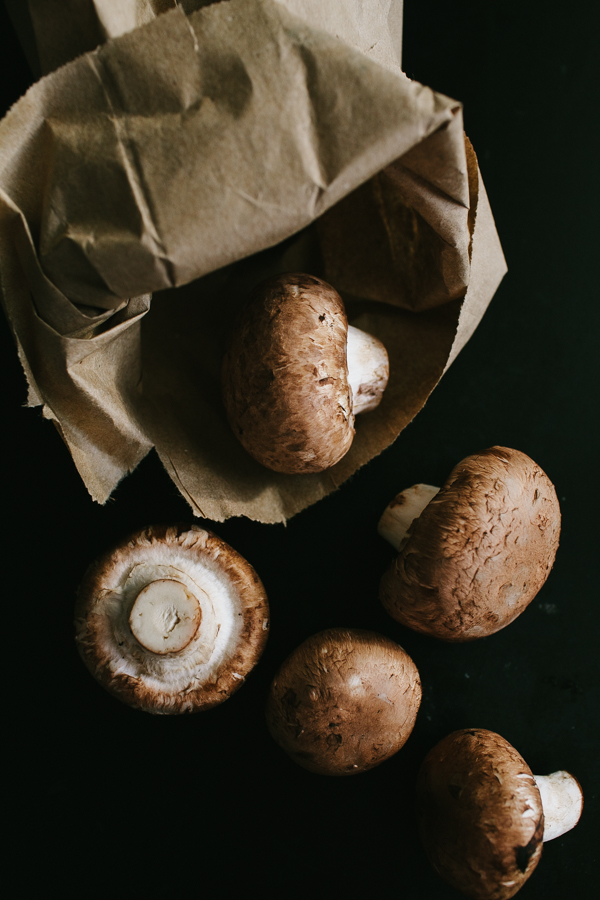 There’s science to back up the meatiness I was tasting in mushrooms. You see, mushrooms are loaded with glutamates which are what make up the fifth taste; umami. Umami is often described as “deliciousness, savory and robust.” Because of the high glutamate content, mushrooms are often used as a meat replacement in vegetarian and vegan dishes.

So how does one turn a mushroom into a deeply flavored umami bomb instead of a soggy, flavorless mess? I believe the secret lies in the sauté. 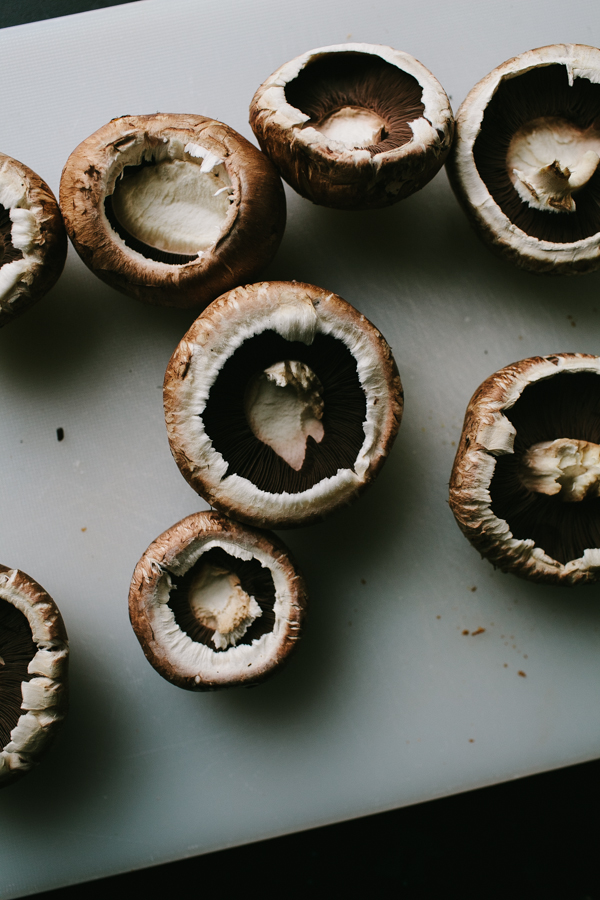 Rub any visible dirt off the mushrooms with a clean soft dish towel or paper towel. Some suggest quickly running them under water but mushrooms are like little sponges and will soak up the water and thus increasing the cooking time by quite a bit.

Break or cut off the woody stems. Slice, chop or mince according to the recipe. Most often I mince up the mushrooms for maximum flavor and because I still don’t always love the texture.

My pan of choice here and quite often is my large cast iron skillet. But really any pan with a large surface area that is NOT non-stick will do just fine. My fat of choice is butter. I will cut it with a bit of olive oil to increase the smoke point so the butter doesn’t scorch.

Add a good bit of butter and olive oil to the pan set over medium high heat along with some garlic. Remember the mushrooms are like little sponges so they will soak in a good bit of the fat.

Sauté the garlic just until fragrant then add the mushrooms and a pinch of salt. Give the mushrooms a quick stir to coat them in the butter and oil. Then let them be. 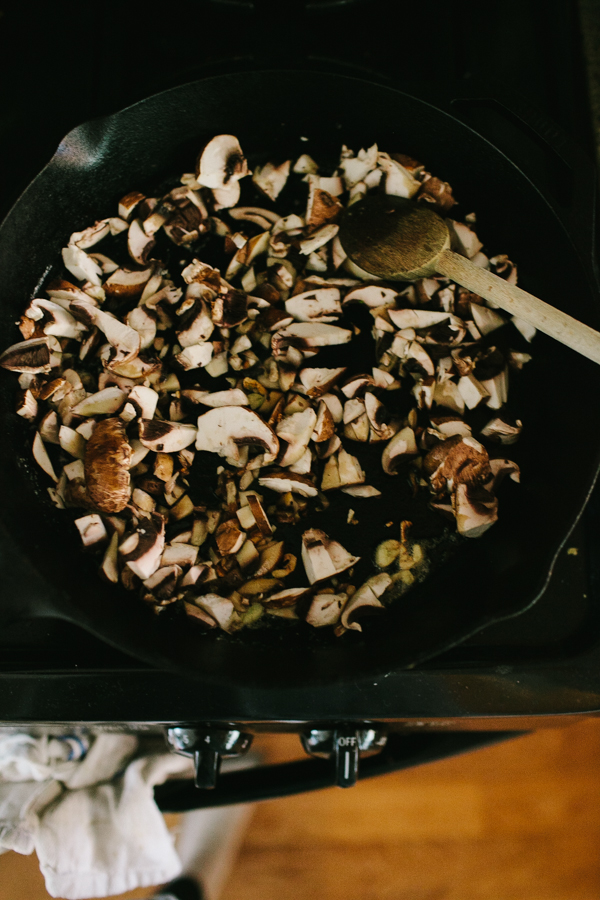 Every so often give the mushrooms another quick stir so that all sides caramelize but mostly you want them to really get a good hit of heat without being moved around too much. Sauté until they are deep, deep brown. Almost the color of the dirt from which they were found.

If you want to add some aromatics like thyme, do this just before you deglaze. 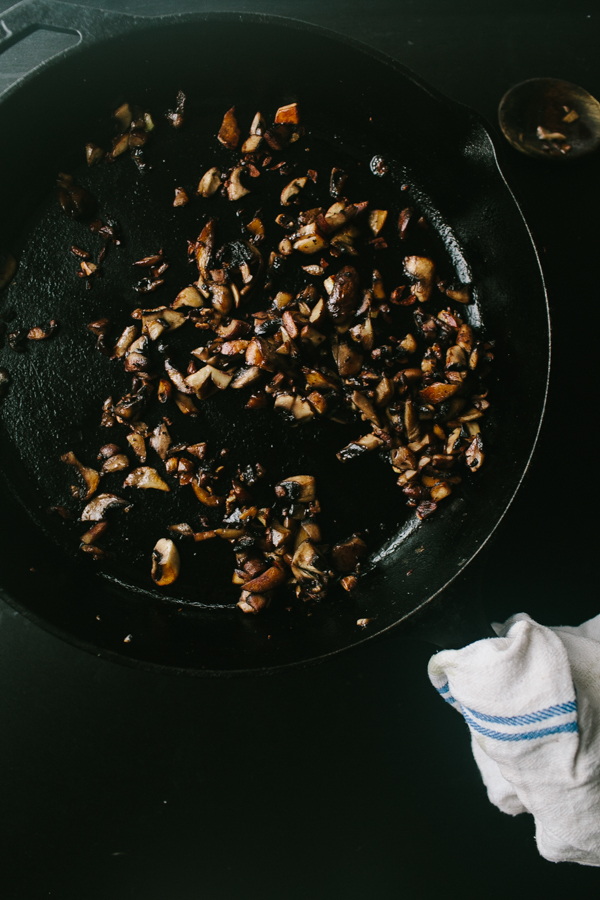 This isn’t a necessary step, but it does add a wonderful layer of flavor especially if you are using this as the base of a soup. The wine brings in a nice acid to offset the richness of the mushrooms. You can also deglaze with sherry, vermouth, beer or stock.

Pour a bit of liquid into the pan. It should sizzle up and evaporate quite quickly, about 2 minutes. Scrape up the little bits that have accumulated on the bottom of the pan as they are full of flavor. Cook until the liquid is gone.

Step 5: Use or save for later.

Proceed with the recipe or you can remove the mushrooms from the pan, cool then seal well and freeze for later use. They will last in the refrigerator for up to 1 week or 1 month in the freezer. 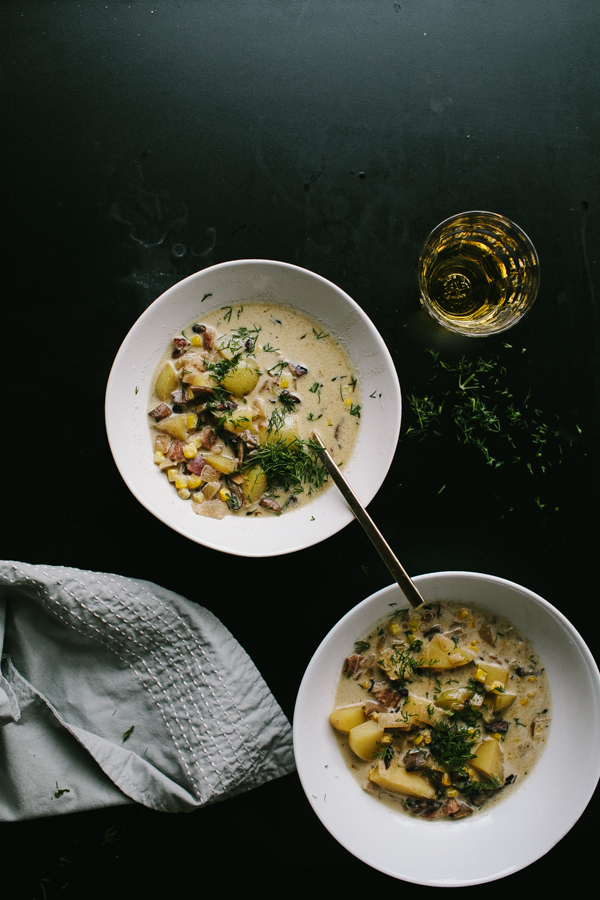 Or even some homemade risotto.

But, I think my personal favorite would have to be homemade pizza!