There’s just something about the crispy-crunchy, salty perfection of tortilla chips. Even better? You don’t have to settle for the generic, store-bought chips — you can make a better companion for salsa and guacamole at home. 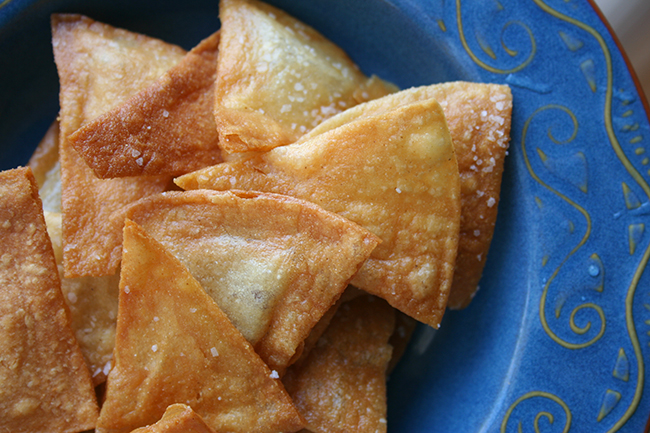 Read on to learn how to make perfect homemade tortilla chips, every time!

When it comes to making perfect tortilla chips at home, the good news is that it’s incredibly easy!

By taking the time to attend to certain details, you can elevate your homemade chips from good to most excellent, every single time. Here’s how to make it happen. 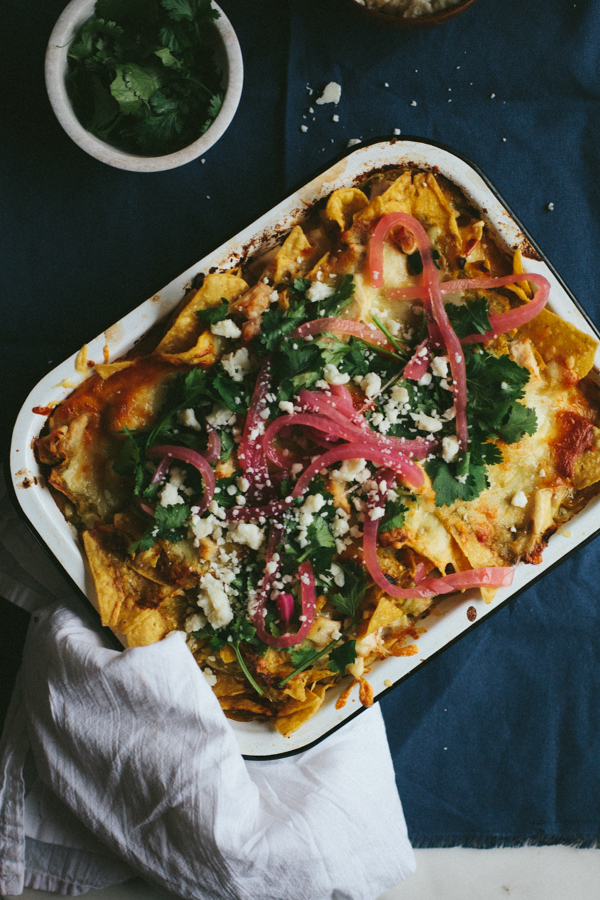 While it’s hard to point to who invented the concept of frying tortillas, the popularity of the modern tortilla chip is attributed to a woman named Rebecca Webb Carranza, owner of a delicatessen in Los Angeles.

She began frying pieces of the rejected, misshapen tortillas, and they were such a popular  snack that she began selling them by the bag. In 1994, she was given the Golden Tortilla Award for her incredible contribution to the Mexican food industry. 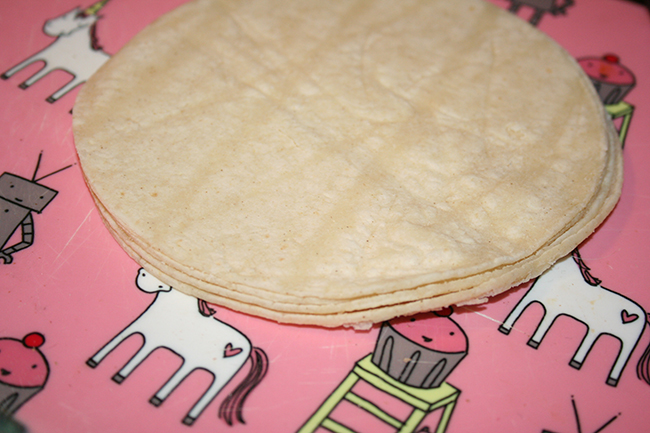 What type of tortillas are best for making tortilla chips?

The two types of tortillas you’ll see most often are made with corn and flour, respectively. Corn is the more “traditional” option, but either can be used with successful results.

As you read on, you’ll find that corn and flour aren’t the only types of tortillas. In recent years, tortillas have been made from all sorts of creative ingredients. And just about any type of tortilla can be transformed into chips!

To make your tortilla chips extra-special, start by making your own tortillas! We have recipes for homemade corn tortillas and flour tortillas on the Bluprint blog.

Frying versus baking tortilla chips: which is better?

Does baking or frying result it better tortilla chips? There’s not a cut and dry answer. Really, it just depends on what you prefer.

Choosing the size for your tortilla chips

Whether baking or frying, keeping your chips consistent in size is important. If the portions are uneven, some may cook more rapidly than others, resulting in uneven cooking. Particularly if frying, you want ample surface space on the tortilla pieces so that they can easily be flipped while frying.

If you’re a tortilla chip purist, you may prefer a touch of salt and not much else. If you’re a little more adventurous, you can jazz them up with spice mixes. It’s up to you.

Regardless of your seasoning choice, be sure to add the seasoning it at the right time. For baked tortilla chips, you want to oil and season the chips before baking (you can always add more spice after). For frying, it’s most effective to fry the chips and then toss with seasoning while they’re still warm.

Choosing the fat for your recipe

As for the type of oil, some recipes suggest a specific type, but personally, I urge you to choose your own adventure. I’ve made tortilla chips with canola oil, olive oil and even coconut oil with delicious results and interesting finished flavors.

Just be sure to choose a type of oil that has a smoke point over 375 F or so. While the recipes featured in this post are both baked and fried at 350 F, choosing an oil with a higher smoke point gives you a little wiggle room.

Corn and flour tortillas are the most common types for making tortilla chips, but they are far from the only options.

With the rising popularity of grain-free recipes, clever cooks are making tortillas out of ingredients such as plantains, almond flour, ground chickpeas and even black beans. All of these types of tortillas can be used to make tortilla chips!

Some of the more fragile-textured varieties will work better as baked tortilla chips, but please feel free to experiment. </p 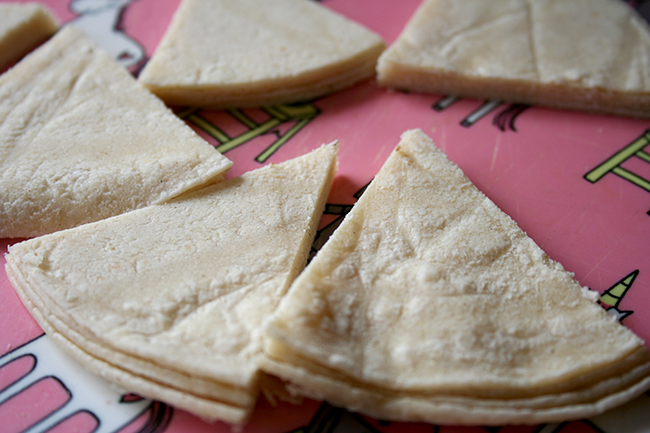 Here are two easy and quick recipes for baked and fried tortilla chips. 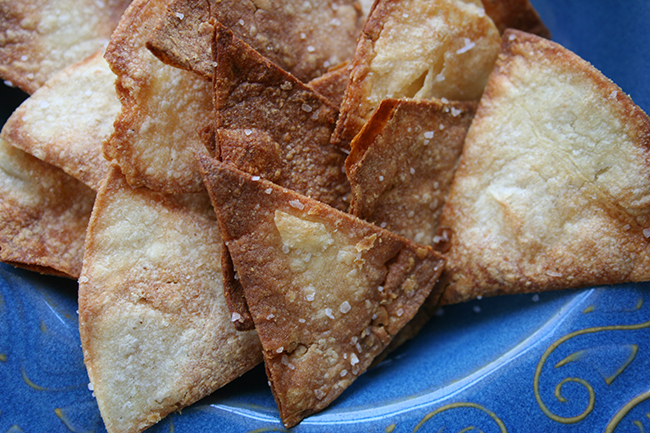 Cut your tortillas into triangles; the size is up to you, but make sure they are fairly uniform.

Place the tortilla pieces in a large bowl, and drizzle with oil, a good shake of salt, and whatever spices you’d like to add.

Use your hands to gently toss the tortillas in the oil-and-spice mixture. I find that tossing them like this rather than drizzling the chips with oil on the baking sheet ensures more even coverage. 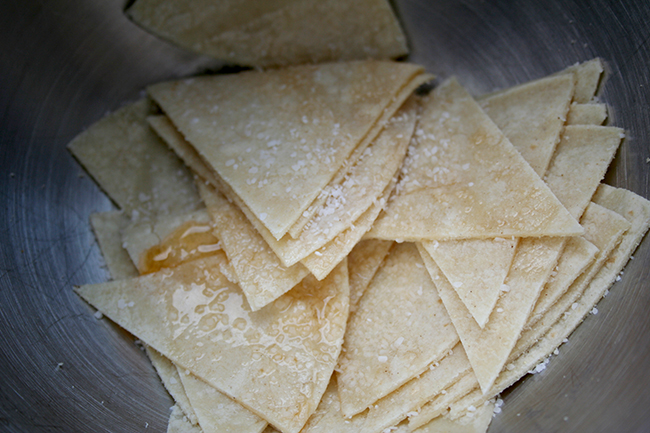 Scatter the chips in a single layer on a baking sheet. Bake for about 7 minutes; remove the pan from the oven, flip the chips and rotate the pan. Return it back to the oven, and continue baking until crisped to your liking (usually about 5-7 minutes longer). 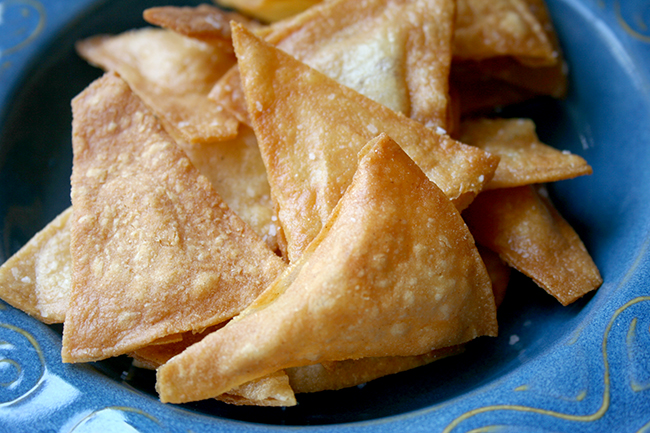 Have a pair of tongs at the ready; set up a cooling rack atop paper towels for your finished chips.

Pour about 1″ of oil into a heavy-bottomed skillet. Heat the oil until it reaches about 350 F.

While the oil heats, cut your tortillas into triangles; the size is up to you, but make sure they are fairly uniform.

Place the tortilla chips several at a time into the pan. You can add as many as possible without overcrowding or overlapping. Cook until browned on the first side (usually less than a minute); flip with your tongs and cook the second side to match.

Once browned to your liking, remove with the tongs and transfer to the cooling rack. Once again, keep them in a single layer. Continue with the remaining tortilla pieces. 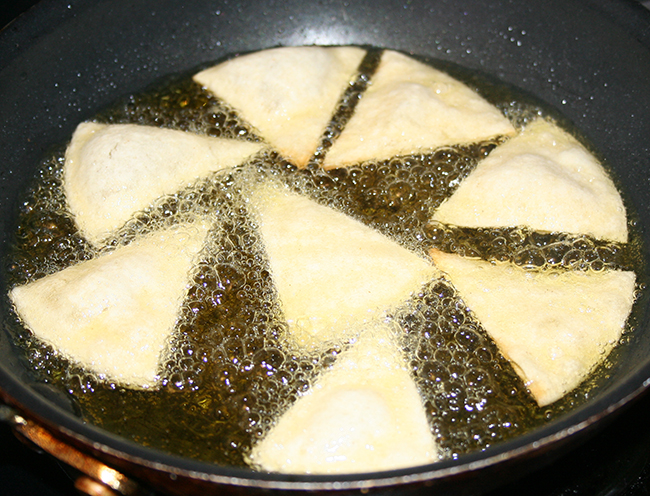 Once the chips are cooled slightly, place them in a paper bag, add a nice shake of salt (and other spices if desired). Give ’em a shake to coat evenly.

If you prefer, you can also put the chips in a bowl and gently toss with salt, but I find the shaking technique really gets them nice and evenly salted!