Welcome to our first foodie edition of Travel Tuesday. We already took a cake decorating tour of the world, with stops in Seattle, Paris, Rome and London. This week, we’ll begin our exploration of different regional cuisines, starting with South Asian chapati.

What in the world is chapati? Translated as “flattened round”, this griddled flatbread is part of a family of breads in India which include roti and paratha. Made simply of flour, water, and ghee (a type of clarified butter), chapati is defined by its use of whole wheat flour, which gives it a lightly nutty flavor.

Chapati is a staple in South Asian cuisine, particularly in India and Pakistan. 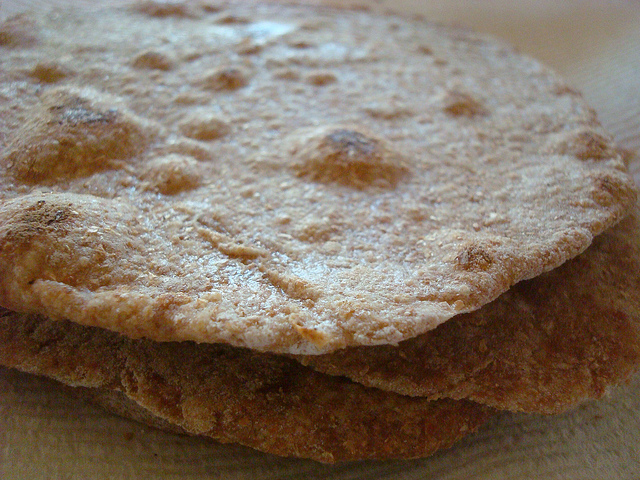 What follows is a simple recipe for making chapati at home.

With only four ingredients and minimal equipment, this is a delicious homemade bread that is accessible for just about any home cook. But first, a brief discussion of the bread’s background.

Well, yes. Different cultures, same idea. But like many basic dishes that have cultural variations, while chapati shares similarities with a tortilla or pita, it’s not quite the same thing.

What’s the difference between chapati, roti, and paratha?

“Roti” means bread, and while it is a type of bread itself, it is also the umbrella under which all of these breads can be referred. So for instance, chapati is roti, but roti isn’t necessarily chapati. Roti could be made with all-purpose flour, for instance, whereas chapati is always made using whole wheat flour. Paratha is a layered and fried version of chapati which tears away in “leaves”. They can also have a filling inside, such as spinach or potato. As you can see, the differences between these flatbreads can be subtle and can vary depending on the region.

How is chapati usually eaten?

In any number of ways. It can be coated with butter or ghee and eaten as a snack or light breakfast (while not traditional, it tastes great with jam, too); it can be served alongside food to use as a scoop or accompaniment; it can be used to wrap sandwiches.

Can I use all purpose flour for chapati?

Yes, but then it won’t be proper chapati anymore–it will go back to the general “roti” category.

How long does chapati keep?

Wrap it in plastic, the way you would tortillas or pitas. This bread does tend to go stale fast if left out.

What is ghee and how do I make it?

Ghee is a type of clarified butter which is popular in South Asia. Although the recipe below will work with oil, the ghee really does lend a wonderful flavor, and it’s very easy to make:

1. Simply place 2 to 4 sticks of butter in a saucepan over medium-high heat.

2. Bring butter to boil (this takes 2-3 minutes), and once it reaches a boil, reduce the heat to medium. The butter will form a foam, which will then disappear. Keep it over heat. After a few minutes a second foam layer will form, and the butter will turn a golden color.

3. Strain the mixture through a sieve to strain foam and milk solids, and into a heatproof container.

Ghee does not need refrigeration and will keep in airtight container for a month. 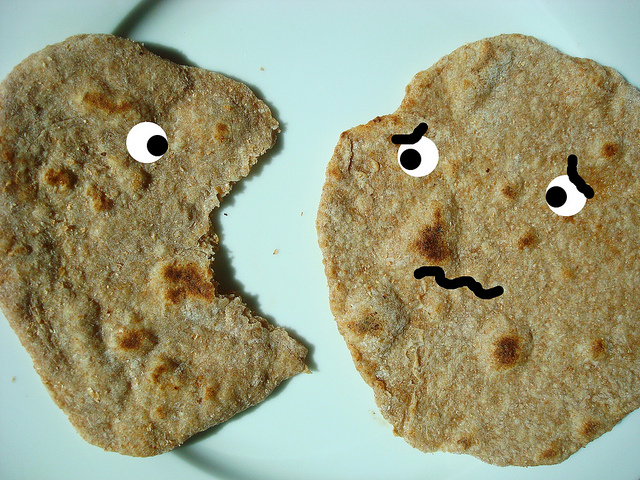 In a large bowl, mix together the flour and salt with a whisk. 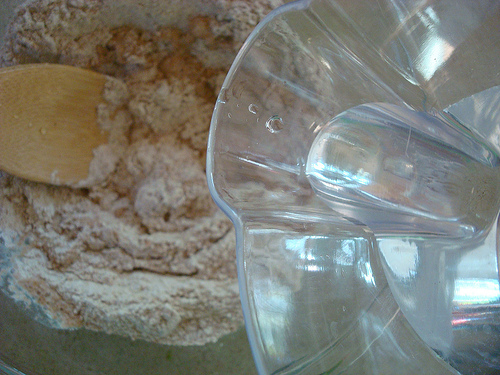 Slowly pour the water into the bowl with one hand, using either your impeccably clean hand or a wooden spoon to lightly stir the mixture while you pour.

The mixture will be pretty thick. Transfer it to a lightly floured flat work surface and knead the dough for 8 to 10 minutes, until the dough is soft and pliable. 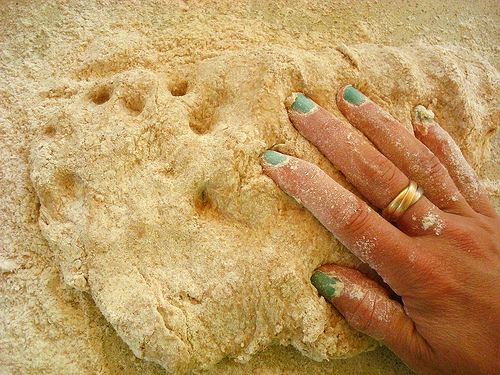 Form the dough into a ball. Transfer the ball of dough back to the bowl. Brush the surface of the dough with a small quantity of ghee to keep it from becoming dry. Cover with a damp cloth or a piece of plastic wrap and allow the dough to rest for 30 minutes. 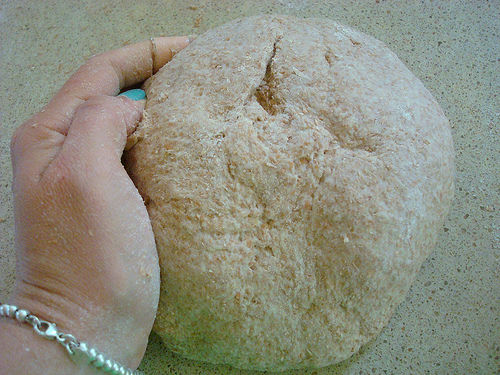 Once the dough has rested, it’s time to make your chapati. Make yourself an assembly line near a griddle on a burner: a floured area for rolling out the dough, a flat dish with whole wheat flour and a small bowl of ghee. Also have a few sheets of paper towels laid out for the finished breads.

On a lightly-floured surface, work the ball of dough into a long log. Cut it into 12 equal pieces. How to do that? It’s easy. First, cut it in half. Now, cut each piece in half again (making for a total of 4 pieces). Now, cut each piece into thirds. There you go: 12 equal pieces. Place these little nuggets back in the bowl and re-cover with a damp towel to keep them nice and moist. 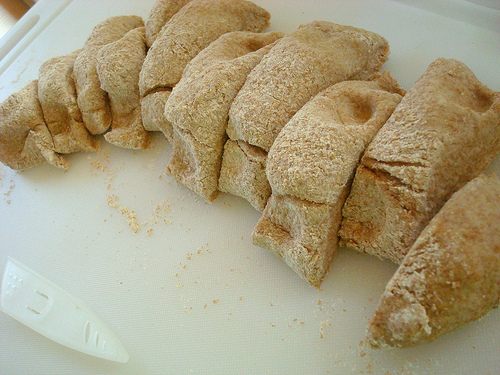 Now, it’s time to roll out the chapati. Grab one of your pieces of dough, and roll it between your hands to make a ball, then flatten it lightly with your palm. Dip this disk into the flat dish with flour, and then roll it with a rolling pin until it’s become a 4-inch circle. Spoon about 1/4 teaspoon of ghee into the center, and use the back of a spoon or a pastry brush to spread it out to the edge of the dough. Now, fold the dough into fourths (in half then in half again) to form a triangle. Seal the edges. Is it getting sticky? Dip it in the flour again. 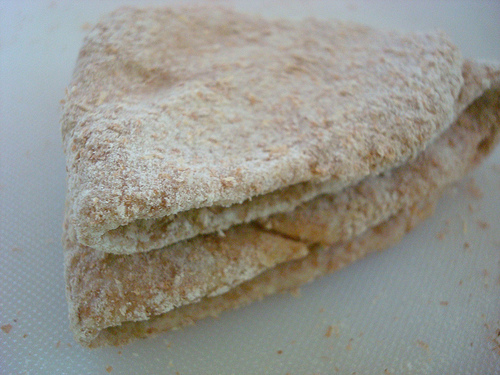 Now, roll it out again. Lightly rotate the triangle as you roll, so that it will form a circle again. Now, you want it to be about 6 inches in diameter.

Get griddlin’. Grab a 10-inch or so griddle or cast iron skillet. Put it over medium-high heat. Chill out for a few minutes while it heats up.

Test the griddle by tossing a few drops of water in the pan. Does the water dance? You’re ready. Flapping the chapati between your hands to remove any excess flour, slap the chapati onto the griddle. It should start darkening almost immediately.

When small bubbles start to form, spread a little oil or ghee over the surface of the chapati, then flip. It should start to puff up. Spoon a little oil over this side too, and when it’s puffed up a little more, flip. Lightly press down the edges using a spatula. This will seal the edges and encourage the entire chapati to puff up. This will keep the chapati flaky and light, but don’t panic if they don’t puff up–after all, they will settle after baking, anyway, and they will still taste good. 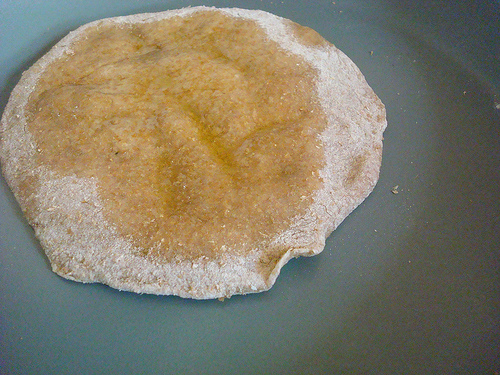 Place the finished chapati on paper towels to cool, and stack the rest right on top. Repeat with the remaining dough. Store chapati in a sealed plastic bag for up to 3 days. 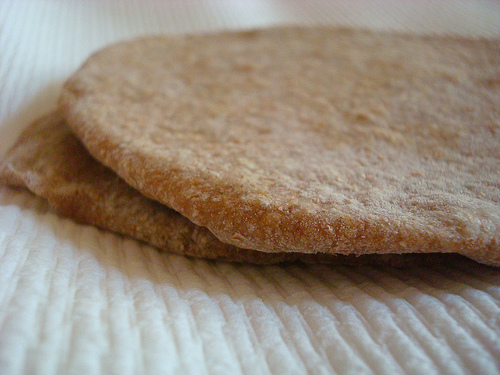 If you enjoyed this recipe be sure to enroll in the popular Craftsy class, Artisan Bread Making, to learn even more new bread baking skills.

This delicious and nutritious bread is bound to give you a great sense of accomplishment upon completion. What type of dishes would you serve alongside chapati?