Every knitter should know the three most basic knitting stitches. There’s a garter stitch, which is knitting every stitch, every row, so the yarn bumps alternate which side of the fabric they’re on. Then there’s stockinette stitch, which is alternating rows of knit with rows of purls to keep those yarn bumps on the same side of the fabric with each stitch. 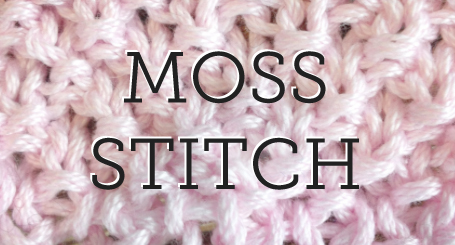 The third big one is seed stitch, where the yarn bumps alternate not on a row-by-row basis, but on a stitch-by-stitch basis. In pure seed stitch, the pattern on each row alternates one knit with one purl. Then the next row, you knit the stitches you’d knitted on the previous row and purl the stitches you’d purled on the previous row. For an even number of stitches, the two row pattern is k1, p1 on row 1, then p1, k1 on row 2. For an odd number of stitches, it’s just k1, p1 each row. This creates an effect where the yarn bumps are scattered across the fabric, looking like little seeds, hence the name.

If you know these three basics, you’ll be in good shape to conceptualize any knitting pattern or project you come across. And once you’ve mastered them, you’re ready to branch out to some of the more advanced variations. Like the American moss stitch.

The double moss stitch is basically an extension of seed stitch over two rows.

You still alternate your knits and purls each stitch, you just do two rows the same before switching. 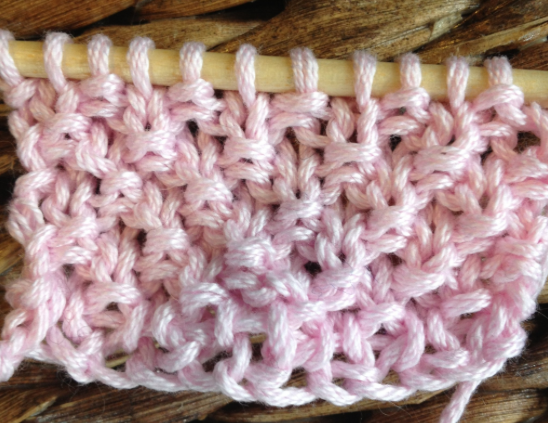 Start with an even number of stitches.

Work with it a little bit and you’ll see that it’s kind of like a broken rib, seed stitch combination. Rows 1 & 2 by themselves look like a rib. Then rows 3 & 4 shift that rib over one column.

The trickiest thing about knitting moss stitch is remembering which row you’re on because it doesn’t alternate each row, it switches every other row.

This is one stitch pattern that doesn’t have to be re-thought too much when you transfer it to knitting in the round.

Follow the pattern as it is written out above and you’ll still wind up with moss stitch, it’s just that the switch will happen after rows 1 and 3.

Because moss stitch doesn’t curl up like plain stockinette, it can be done all on its own as a full project. Perhaps you want a simple baby blanket or have pretty yarn and just want to make a simple scarf. Moss stitch can be that simple pattern that has just enough visual interest to allow your yarn to shine. It’s also a good pattern to use on something like a washcloth because the texture makes it a good scrubbing surface.

Now that you know how to knit American moss stitch (or double moss stitch), what project are you going to use it on? Might I recommend this cute little keyhole scarflette?

In case you missed it learn about the seed stitch and the British moss stitch here.