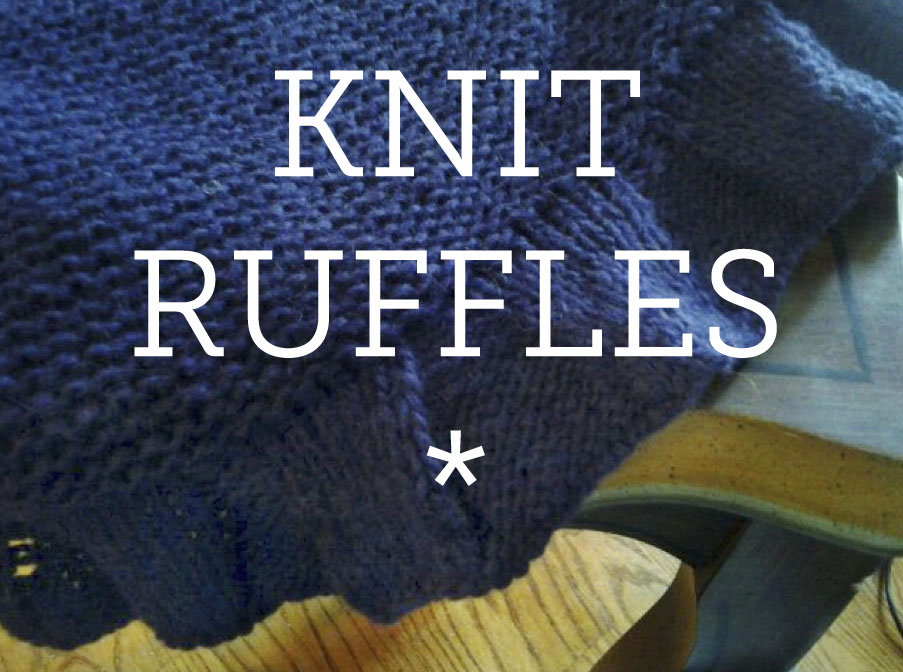 Scarves are one of the easiest knitting projects, right? Whenever you can’t think of what to make for someone or with a particular skein of yarn, you often default to: scarf. At least I do. So I’m always looking for interesting embellishments to jazz them up. One great option? Add ruffles!

The basic principle of a ruffle is to add lots of stitches on a space that’s meant for fewer stitches, so your fabric will bunch up and create that ruffled look. Adding a ruffle to a straight edge is fairly easy to do. When you get to the beginning of the ruffle, just start adding stitches, usually on the right side rows. Then, the most common technique for knitting a ruffle edge is to work your wrong side rows with a mixture of knits and purls, so only part of your ruffle edge will be in stockinette. This will make the ruffle really stand out as the garter stitch and stockinette contrast to make the shaping pop. The ruffle shown on the above shawl is a bell ruffle.

If you’re making a straight scarf with a ruffle edge, you will most often knit the body of the scarf and then knit the edge at the end. You can even take a finished scarf, pick up an edge, and add a ruffle.

When the entire scarf is one big ruffle, shaping rows come into play to create the ruffle. Working a series of short rows adds in the extra stitches you need to make that bubble effect. Create short rows by only working some of the stitches on your row before turning your work and knitting (or purling) back the other way. This helps you build up one side of your project.

First, you’ll work a series of short rows, decreasing in length. For this sample, I cast on 30 stitches. The first short row was 13 stitches, then 10, then 7, then 4.

After the four short rows are done, you knit across the entire length of the project. Then on the next row, begin working the short rows from the other edge. From the sample picture, you can see how the side I’ve worked has significantly more depth than the other side. You might also noticed how that worked side has a little bit of a curve to it. It’s hard to see a ruffle coming out of that, isn’t it? But next, I’ll work the other side and keep going back and forth. As I finish each series of short rows, that curved effect will continue to appear, in the end creating a series of ruffles the entire length of the scarf. Now you know how to knit a ruffle scarf!

What kind of ruffle scarf do you find most appealing?