Raising chickens is a fun, relatively easy way to enjoy fresh eggs and to diversify your hobby farm. They are great with kids, make wonderful pets, and are a constant source of hilarious entertainment. Did you know that chickens are the closest known living relative of the T-Rex? How sweet would it be to have a little dinosaur running around in your backyard? 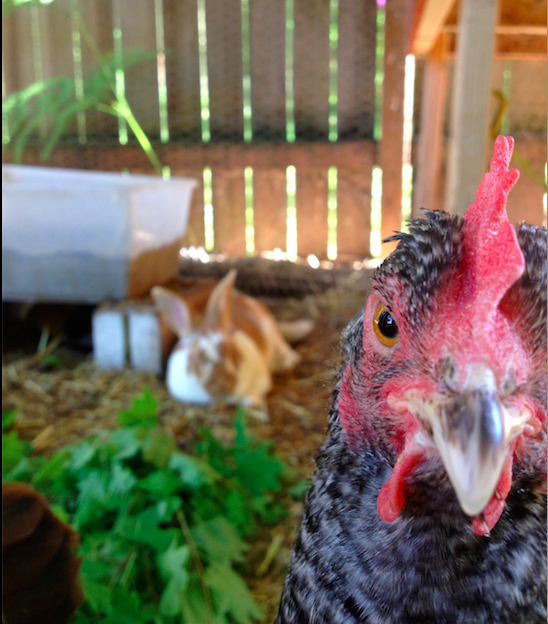 Until the 1960s, after the popularization of big-box grocery stores, it was very common for suburban American homes to have big gardens, a few chickens and a even a cow in in the backyard. Owning one’s food chain was not a luxury, but a necessity.

Today, after having been so very far removed from our food chain, many of us are taking steps to reclaim it. That is exactly why I started my hobby farm. I’ve been to big farms and have seen the things that they spray on the plants to keep pests away. I’ve seen the horrible conditions at commercial chicken farms — the chickens live incredibly stressful lives in cramped, filthy quarters. They have to be given antibiotics and all kinds of other medications just to survive in that environment, and I can’t in good conscience support that industry. I want to know where my food comes from.

I grew up in Montana and raising animals was a part of my life, so deciding to get chickens, rabbits, and, more recently, ducks, was not a big step for me. Convincing my husband, who was raised in a Seattle suburb, was the biggest challenge. But he eventually came around and now loves eating the delicious fresh eggs and produce from our small urban farm.

To purchase my chickens, I went to a local farm which had new batches of chicks every Friday. I’d done my research and I was allowed to get four chickens, so I wanted the four that would best suit our needs.  I settled on a Rhode Island Red, a Barred Rock (sometimes called a Plymouth Rock), a White Leghorn and a Brown Leghorn (because the hens look like roosters and I am not allowed to have roosters). Rhode Island Reds, Barred Rocks, and White Leghorns are the best producers. My White Leghorn was killed by a raccoon last year, but when she was alive, she laid an egg every single day. My Rhode Island Red comes in just behind her at 5-6 eggs per week. 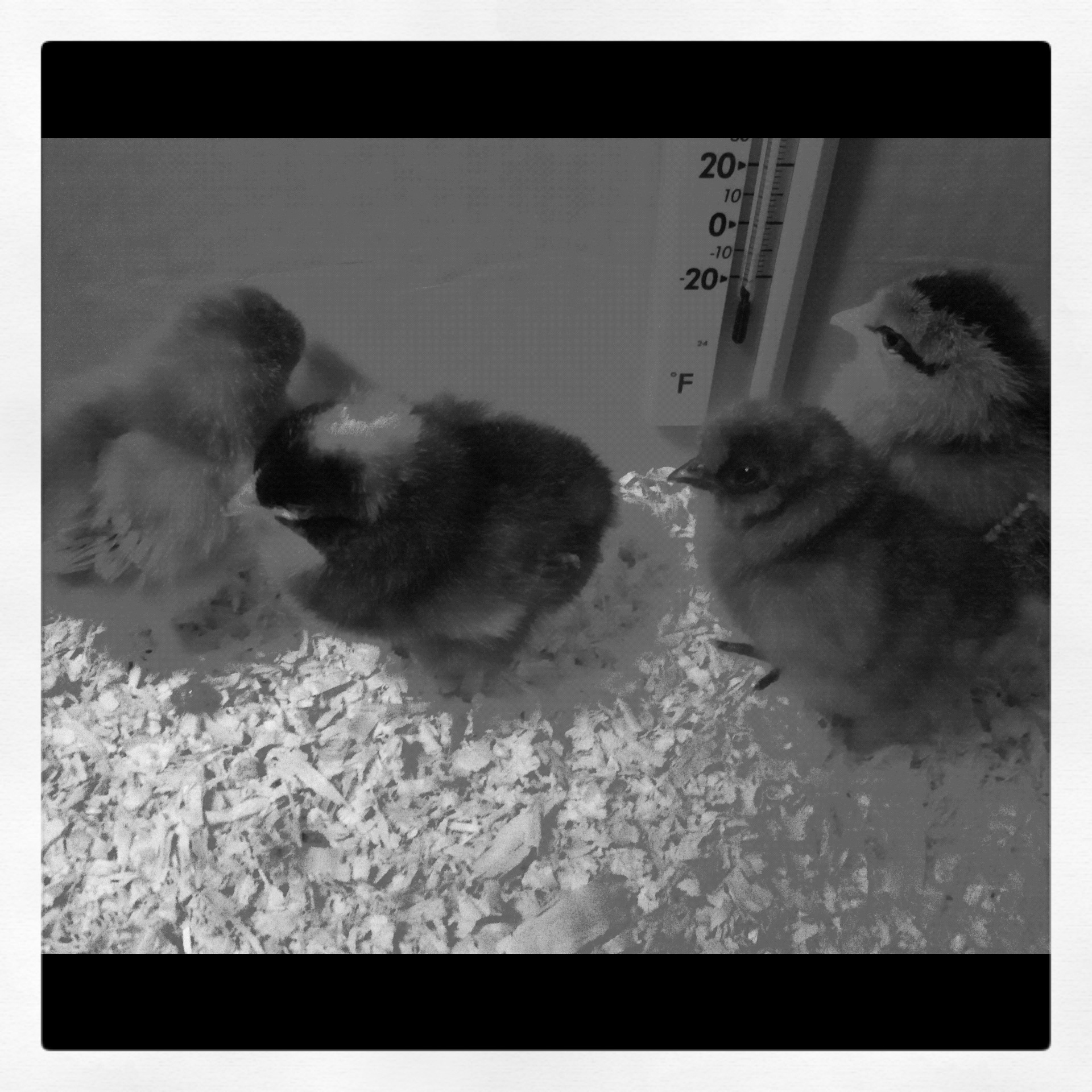 When I bought the chicks I also bought two small gravity feeders, one for water and one for food. I bought chick starter food as well as an electrolyte and probiotic powder to put in their water. I taped a thermometer to the wall of the Rubbermaid near the water dish so I could keep an eye on the temperature inside the brooder. I had to tweak the placement of the heat lamp and brooder a bit to make sure that there was one area that was always at least 90 degrees F and a cooler area they could move to in case the chicks got too hot.

After that, it was just a matter of making sure the chicks had clean water, fresh bedding, and food each day. And lots of snuggles. 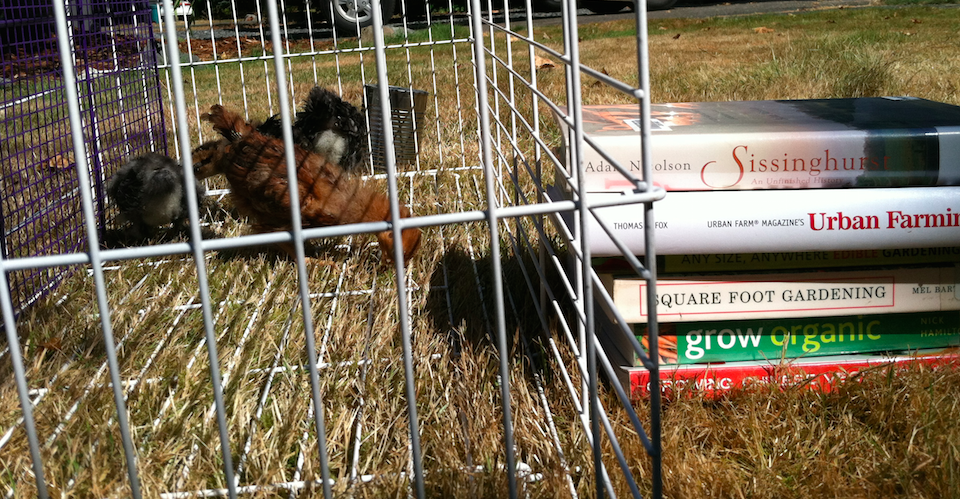 As they grew, I planned the design of the chicken coop.

At first, I spent a weekend and built a small coop entirely out of scraps. I built a frame for the run with 2×4’s and stretched galvanized chicken wire across it. I also made sure to attach wire mesh to the floor of the cage to keep rats, mice, raccoons and possums from digging into the cage from the bottom. Because it rains a lot here, I made a roof for the run, but if you live in a drier area, this isn’t necessary. I made a nice roomy roost for the chicks out of plywood and put a 2×2 across the middle of the for them to sleep on. A little ramp led from the run up into the roost. At night, the ramp, attached with a hinge, could be pulled up and secured with a string to lock the hens in and predators out. Inside the same compartment, I made two nest boxes for them to lay their eggs (to be noted here, chickens don’t usually start laying eggs before they are 6 months old).

This little coop worked great until I realized I wasn’t going to be able to let my chickens free range in my yard, so I built a bigger one, with all the same components: a run, a safe, secure roost, and a nest to lay their eggs. 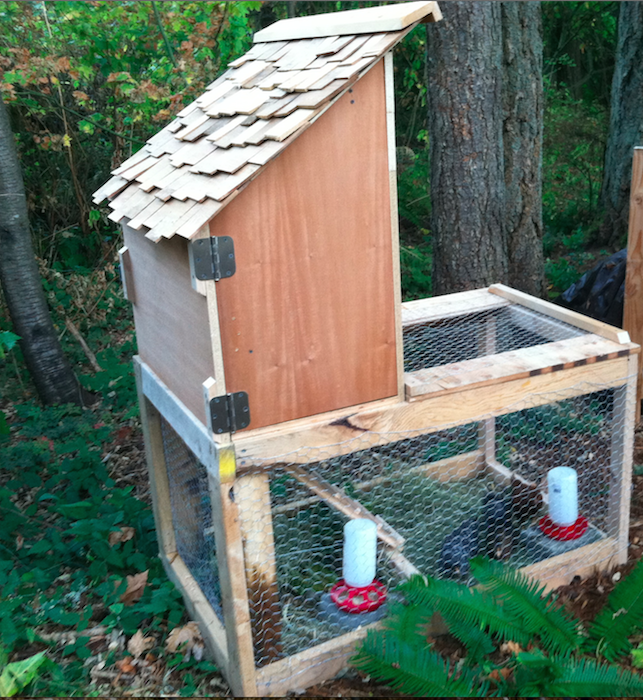 My first coop was built entirely out of scraps. I later upgraded to a larger one.

When preparing to keep chickens, there are many things to consider, but every living creature needs three basic things: food, water and shelter. 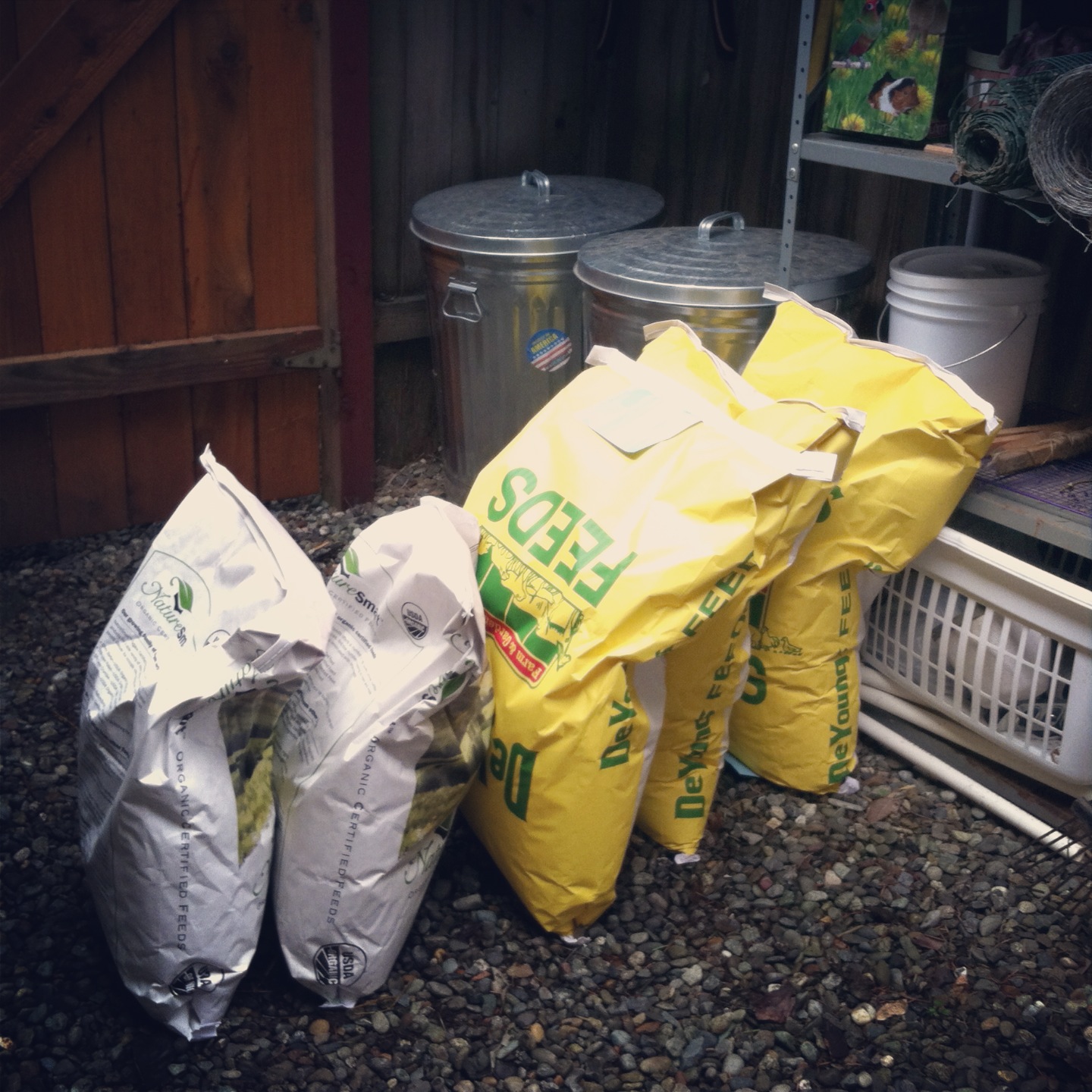 When it comes to food, you can buy chicken pellets or supplement their diets yourself with a variety of grains, fresh greens, table scraps, bugs, slugs and worms.

If you let your chickens free range in your yard, they will help you with bug control, with your weeding and keep your lawn very well thatched. They will also leave little bits of free fertilizer all over the place. 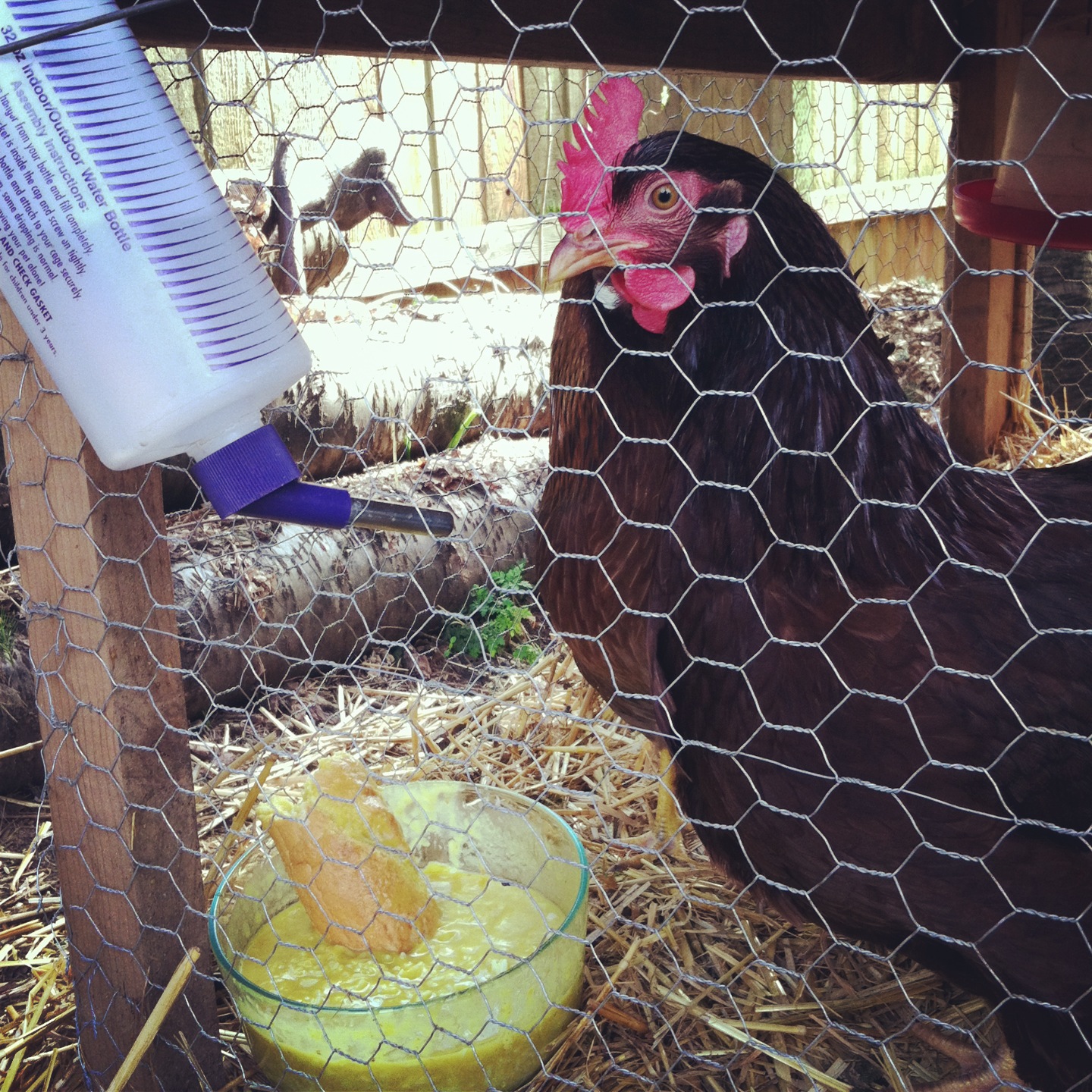 Chickens need clean water every day, but they tend to make a mess in buckets and open water containers, so you can buy special chicken watering nipples and string up an elaborate watering system, or just do what I do, use rabbit waterers, which are bottles with a double ball bearing nozzle that keeps them from dripping. It might take a little training to get them to drink out of these bottles, but mine figured it out in an afternoon and have loved having access to fresh, clean water every day for the last two years. If yours don’t take to it right away, try squeezing the bottle a bit to get it to drip when the chicken is looking or, if you’ve held your chickens a lot, you can train them to drink by guiding their beaks to the nozzle, and using your finger, releasing a bit of water onto their beaks so, in time, they learn that there is water inside the nozzle.

At night, the metabolism of a chicken drops to the point that they can barely move. If a predator is able to reach them in this near comatose state, your chicken will become a very easy snack, as they can’t run away or defend themselves. That is why it is very important to have a safe, secure shelter for your chicken to sleep or “roost” at night. This can be as simple or elaborate a design as you want, you just need to provide a pole for them to rest on, plenty of air flow, and make sure they are locked in tightly at dusk. Your chicken run and coop can be as simple or as elaborate as you want, and there are all kinds of plans to be found simply by Googling “chicken coops.” 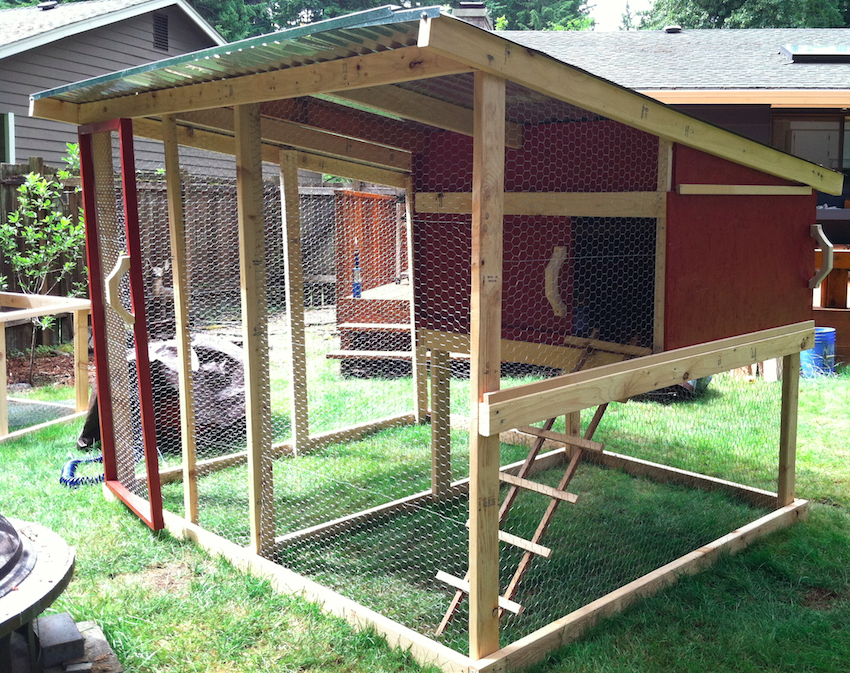 Keeping a clean coop, after meeting the basic needs of your birds, will be one of the most important things you can do to keep them, and you, healthy.

There are lots of different styles to do so and lots of different beddings that can be used, but I like to use a tactic called deep litter method, which is exactly what it sounds like. I fill the run with about 1/2 bale of hay, which makes a 6-10 inch deep bed of hay for the chickens to dig around and play in. When it starts to get dirty and compacted, I add another ¼ bale and mix it in. I do this every few weeks and then, once about every three months or so, I remove all the hay and start again.

Pro tip: use a pitchfork to move the hay. I pile my hay in compost piles in the back and use it for mulch, weed control, and, if I’m patient enough, fertilizer. It takes three months for the poo to turn into garden gold, and about a year for the hay to fully compost. You don’t want to put fresh chicken manure right onto any of your plants, because the high nitrogen content in chicken poo, as well as the way it decomposes will likely do more damage than good. That said, letting your chickens play around in your garden and leave behind a few little presents isn’t going to hurt anything. 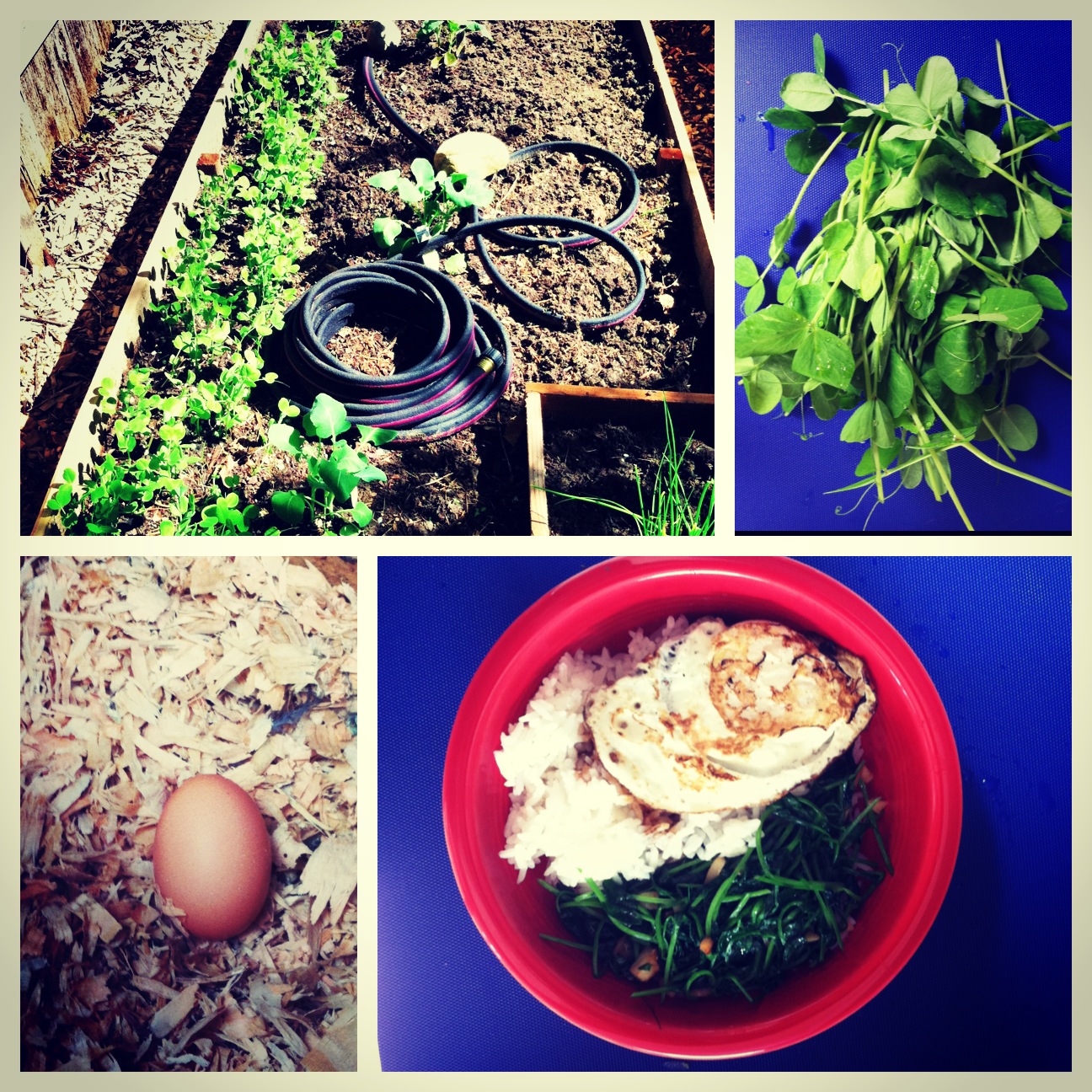 The first meal I made entirely out of things I’d grown in my back yard was one of the tastiest and most satisfying I’d ever eaten. 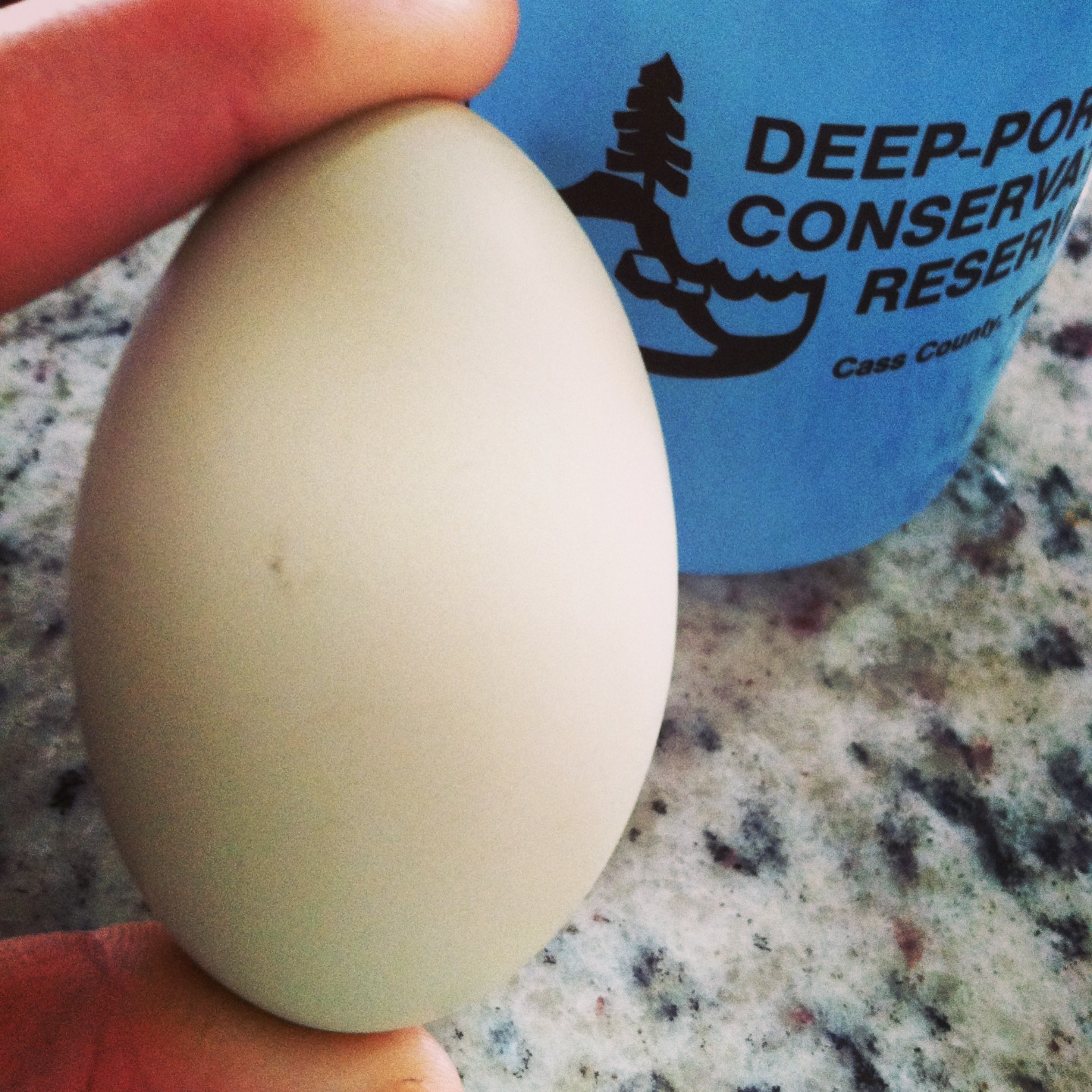 Adding to the entertainment factor of chickens is their occasionally bizarre egg shapes. Shown here, the torpedo egg!

Every kid needs a sandbox

Part of a chicken’s personal cleanliness routine includes fluffing their wings and rolling around in dirt. I put a 20-gallon Rubbermaid filled with a bag of play sand in my coop and my chickens love it.

A word about laws (and neighbors)

There are a few areas where chicken keeping is illegal, though more and more cities are adopting chicken-friendly policies. If you have a yard, it’s likely legal for you to have up to four hens but no rooster. When buying your chicks, ask if the chicks are guaranteed to be hens, and, if they turn out to be roosters, what the return policy is like.

We are allowed up to four hens and two adult goats, even in downtown Seattle! Another thing to be noted is that chickens, even hens, can get very loud at times. My Rhode Island Red stands at the door to the nestbox and yells about the fact that she’s about to lay an egg for 15 minutes every day. My neighbors don’t mind though, especially when they get a carton of fresh eggs every so often.