Do you know who’s who in the world of cake decorating and designing?

Here’s a chance to discover some of the famous cake designers who are shaping (literally) the culture of custom cake design, one sugary creation at a time.

Since there are too many great designers to name in just one post, we’ll take it a few at a time so that you can really get to know these inspiring artists, including an inside look at who they are as well as an exploration of the amazing art they create with buttercream, fondant, gum paste and cake. 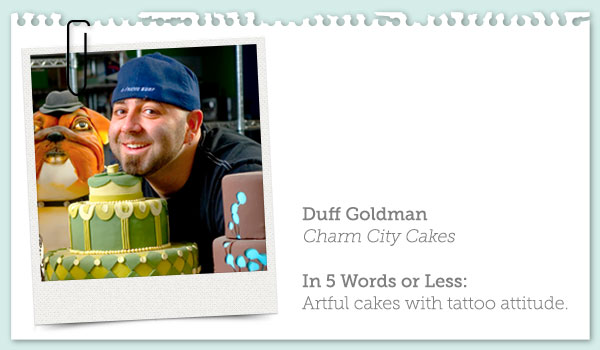 In five words or less: Artful cakes with tattoo attitude.

The sweet lowdown: Described as both audacious and creative, Goldman is the founder and owner of Baltimore’s Charm City Cakes bakery. The bakery’s daily goings-on are featured on the Food Network show Ace of Cakes. Recently, he began collaborating as a designer for a line of branded cake baking and decorating products.

As you can see, even a fondant covered cake with a sweet color scheme and theme has a stylized, avant-garde look when it’s made by Charm City Cakes. 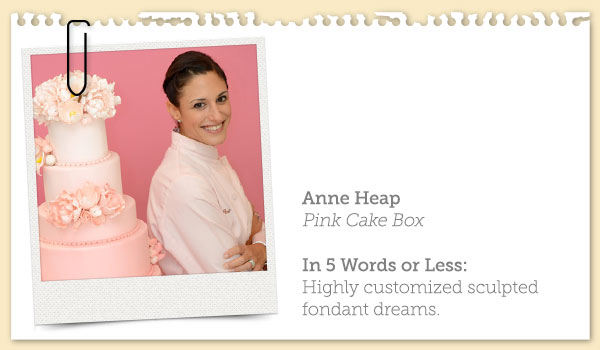 The sweet lowdown: After working in advertising, Anne decided to quit the corporate world and pursue pastry arts. After studying at the French Culinary Institute in New York City, she completed an apprenticeship with Ron Ben-Israel Cakes in New York City. In 2005, she founded Pink Cake Box in Denville, New Jersey, which includes a retail location and a skilled staff of decorators.

Her work has been featured in numerous magazines and TV shows, and she is the instructor of the Bluprint course Cake Topper Techniques.
A cake from Anne’s portfolio:

Created for a bar mitzvah, this cake features amazing fondant work and cake painting. And that globe on the top actually spins. Incredible! 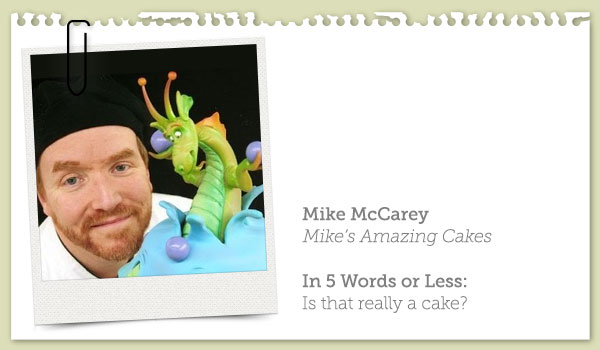 In five words or less: Is that really a cake?

The sweet lowdown: Mike McCarey of Mike’s Amazing Cakes started a lifelong love affair with cake in his teens, when he spent a two-year term at a cooking school in Denver. From there, he worked as a pastry chef in various cities before settling in Washington state, where he decided to focus on cake exclusively. His goals? That the concept being presented should be as accurate as possible, but also as expressive and unique as possible.

His clients include celebrities such as Dustin Hoffman, Arnold Palmer, Rodney Dangerfield and Julia Child, and corporate clients such as Disney, Microsoft and the Smithsonian. He’s also a Bluprint instructor! Check out his classes Advanced Cake Sculpting and Classic Car, Timeless Techniques.
A cake from Mike’s portfolio:

It may look as if it’s a collectable figurine, but it’s actually cake. This stunning dragon cake exhibits Mike’s mastery of sculpting with fondant, not to mention his wonderful detail with airbrushing. 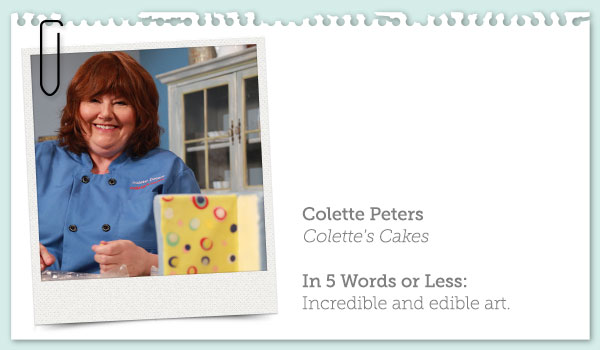 In five words or less: Incredible and edible art.

The sweet lowdown: After studying fine art in New York City, Colette moved on to a designer position at the oh-so-posh Tiffany & Co., where she earned a reputation as office baker. Designing well-received cakes for a Tiffany catalog shoot led to a book deal and a cake making empire, which includes her business, Colette’s Cakes.

Her accolades are almost too many to list: an international clientele, designing cakes for the President of the United States, teaching classes internationally, writing five books, and appearing in countless publications and TV shows. She is also a Bluprint instructor! Her courses include Piece of Cake! with Colette Peters and Vintage Cakes, Modern Methods.
A cake from Colette’s portfolio:

Pillowy tiers of cake (get it?) are covered with fondant and gum paste detailing, complete with hand-painted details and a beautiful palette of custom-tinted colors.