With the arrival of the warm weather comes the opportunity to entertain outdoors, where nautical themes often take center. As a cake decorator, I love finding ways to incorporate the “clambake-type theme” into my designs for summertime events. Lobsters are in fact an increasingly popular motif. Ever since Friends made it known that these creatures mate for life, popularizing the phrase, “He’s her lobster,” they’ve become more prominent at bridal showers and weddings.

Claw your way over to check out this step-by-step fondant lobster tutorial, perfect for embellishing your summer cake and cupcake designs! 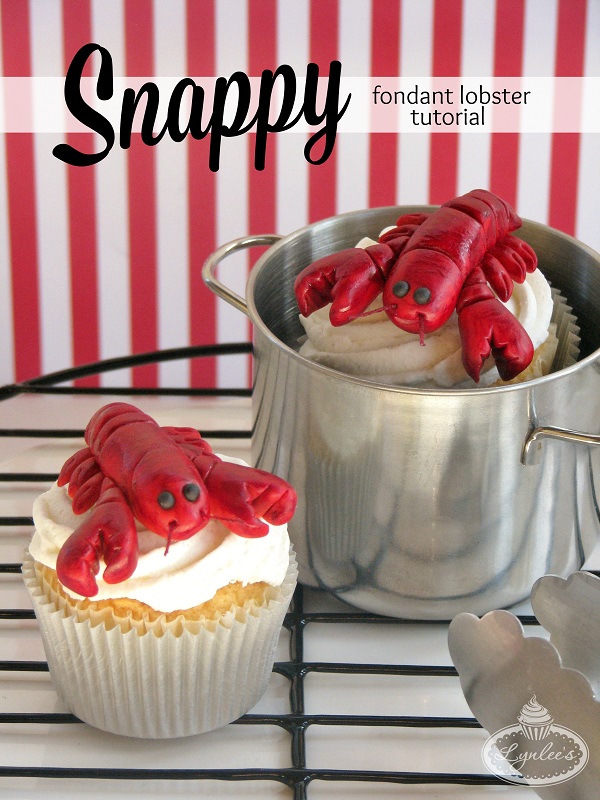 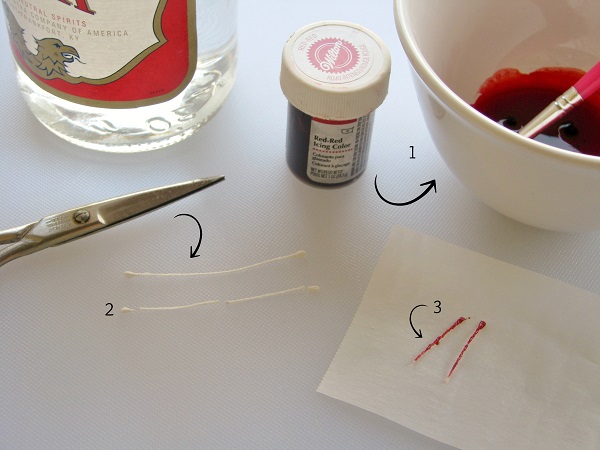 Prepare red soft-gel paste to utilize for painting. If too thick, add a little bit of vodka (the alcohol will evaporate).

Cut the ends of the white stem off with scissors, then cut the stem in half.

Use a brush to paint the two stems red for the antennae, then set them on a piece of parchment paper to dry. 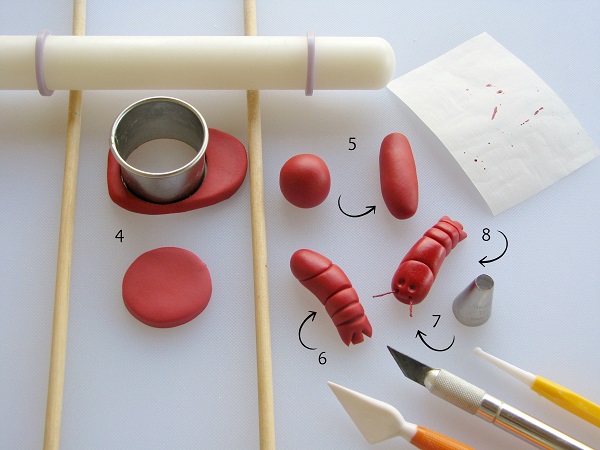 Roll red fondant thick with the rolling pin and wooden dowels as guides, then cut out a 1 1/4″ circle.

Roll the red circle into a ball, then into a sausage shape, narrowing both ends just a bit for the head and lobster tail.

Using the knife tool, make an oval indentation to differentiate the head. Then, make three more indentations with the knife tool towards the end of the lobster, leaving enough room at the very end for the tail. With the precision knife, make two cuts on the tail and press it down a bit.

Using round decorating tip #12, indent a little smile and use the small ball tool to make indentations for the lobster’s eyes. Make sure to leave enough room for the antennae.

Insert the two painted antennae in the front of the lobster’s face, between the eyes and the smile. 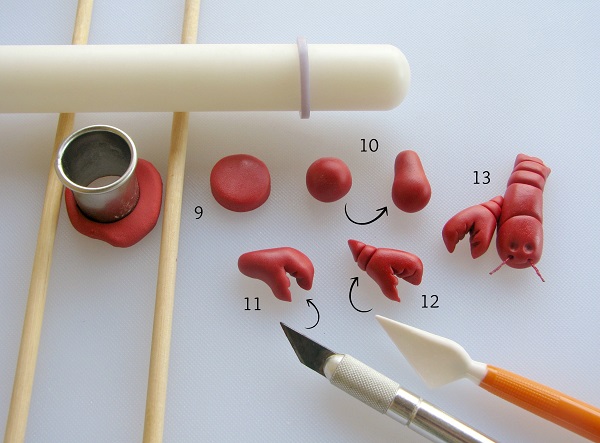 Roll red fondant thick with the rolling pin and wooden dowels as guides. Cut out a circle with the 7/8″ round cutter.

Roll the red circle into a ball, then form it into a teardrop shape with your fingers.

Use the precision knife to cut a diagonal slit on the larger side of the teardrop to create a lobster claw. Use the knife tool to make two indentations on the inside of each claw.

Use the knife tool to make two indentations on the opposite end of the claw, then shape it on the side of the lobster’s body.

Repeat the steps above for the opposite claw. 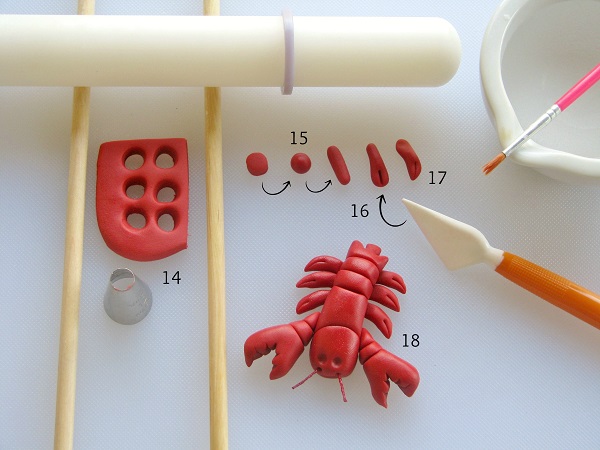 Roll red fondant thick with the rolling pin and wooden dowels as guides. Cut out six circles with round decorating tip #12.

Take one of the circles and roll it into a ball, then roll it out into a longer sausage shape.

Make a small indentation at one end for a leg.

Pinch the indented end of the leg and curve the entire fondant a bit. Flatten the opposite end with your finger that will later be glued to the bottom of the lobster.

Repeat the above steps for the remaining five circles (make sure you are curving three of the legs in the opposite direction). Lay the legs on your work surface and when you’re happy with the placement, apply a bit of glue on the end you flattened to glue the legs to the bottom of the lobster’s body. Glue the claws in place as well. 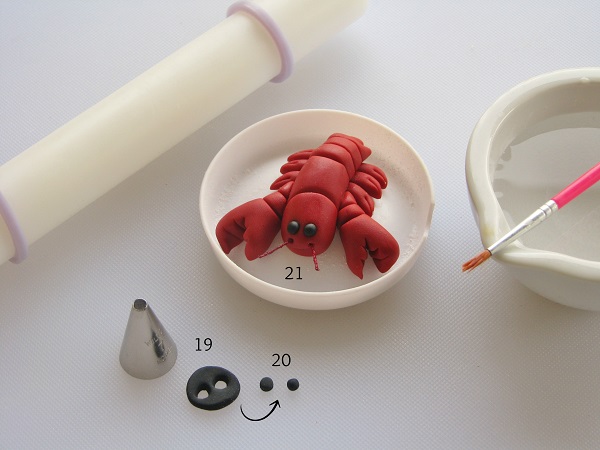 Roll out black fondant with the rolling pin and 1/8″ guide rings and cut out two circles with round tip #7.

Roll the two circles into balls to create the eyes.

Glue the two eyes on the lobster. If you are planning on placing the fondant lobster over a cupcake, turn a large flower forming cup upside down, sprinkle some powdered sugar over the top and place the lobster on it to allow it to dry in a slight dome shape. 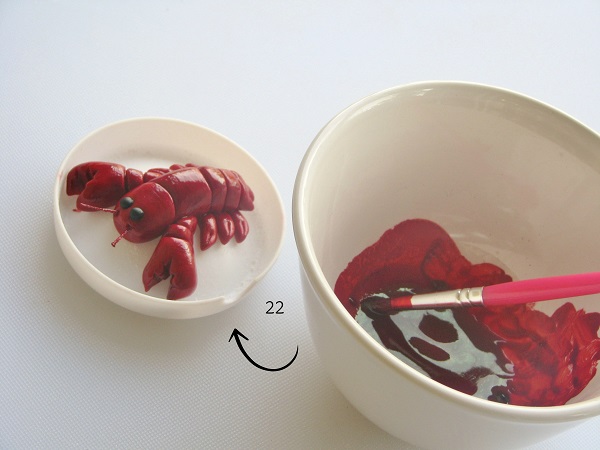 Use the remainder of the red mixture to paint the entire fondant lobster to give it some shine and depth to the red. Allow it to dry thoroughly. 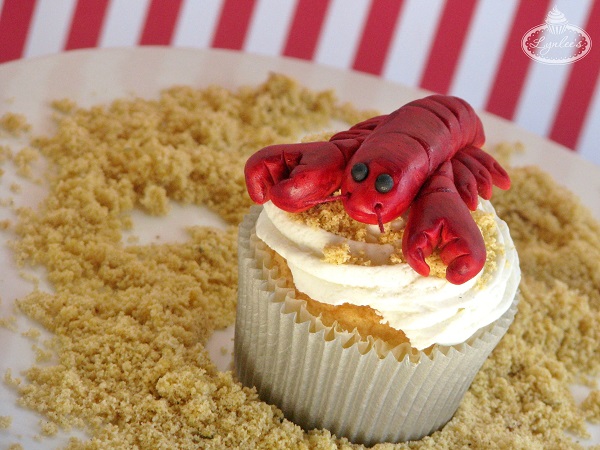 What is your favorite summertime activity?