No movement in painting has captured more drama and storytelling power than the Romantic movement. More than just a movement in visual art, Romanticism swept through the all of the fine arts in the early and mid-19th century. The artists’ interest was in depicting raw and powerful emotional experiences, and showing how humans experience the sublime — the terrifying and wonderful mysteries of nature and the universe.

Here’s a look at some of the great Romantic painters. 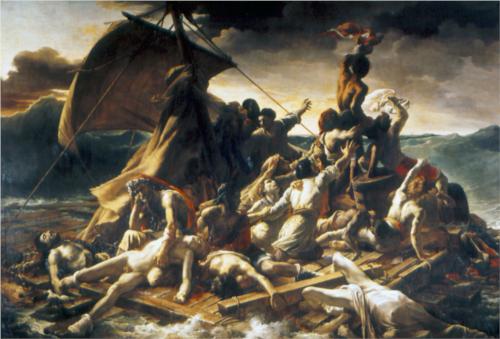 Théodore Géricault is arguably among the most well known of the Romantics. The Raft of the Medusa tells the story of the passengers and crew of a wrecked ship whose captain had abandoned them. This real-life event would have been well known to viewers of Géricault’s painting at the time.

Géricault dramatized the incident to epic proportions, with the victims helplessly adrift on a raft, pitted against the relentless forces of nature and victims of human folly. Yet despite the despair, a few figures heroically wave and point at something out of the field of view, presumably a rescue ship. This note of hopefulness and resolve in the face of tragedy and the will of nature was a strong theme in Romantic painting. 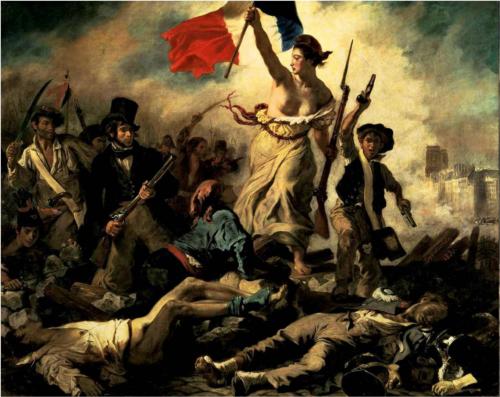 Eugène Delacroix was a young friend and pupil of Géricault who even posed for one of the dying figures in Raft of the Medusa. In Liberty Leading the People, Delacroix has followed Géricault’s subtle political commentary about a real event with more overt commentary within a wholly allegorical situation. The symbolic figure of Liberty leads the people in a battle over nameless oppressive forces. The painting is supposed to represent the fierce and determined spirit of the French people. While the French government purchased the painting, it was only briefly exhibited, as officials deemed the daring symbolism vulgar and potentially inflammatory. 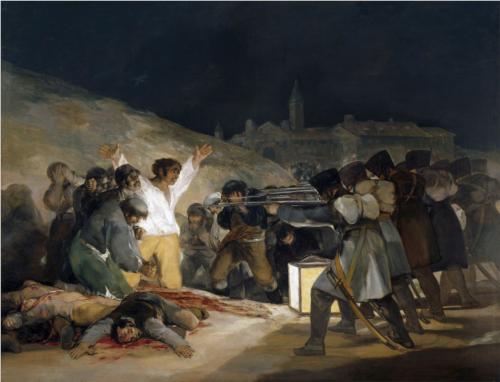 Perhaps no Romantic painter was as passionate as the Spanish painter Francisco Goya. While Goya lived a bit earlier than the other Romantics, his later work heralds the beginnings of the period. Goya’s Execution of the Defenders of Madrid, 3rd May 1808, depicting the aftermath of the French occupation of Spain in 1808, is a treatise against the horrors of all war, rather than a politically strident choosing of sides.

Goya wanted to capture the terror and tragedy of violence, as well as say something about its inevitability and omnipresence in the human struggle. Today it remains one of the starkest and most earnest depictions of war that has ever been painted. 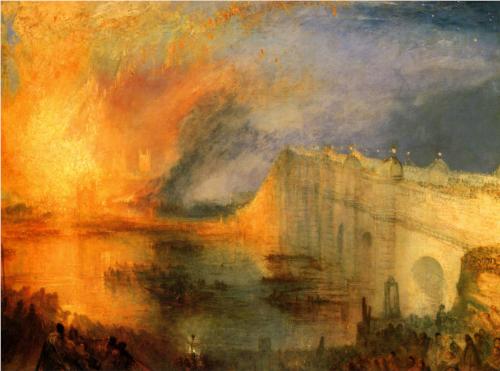 J.M.W. Turner’s breathtaking painting The Burning of the Houses of Lords and Commons is among the most striking Romantic paintings. It truly encapsulates everything the Romantics were about: powerful natural forces wreaking havoc on the edifices and endeavors of mankind, with powerful colors and gestures to bring the point home.

Thousands of citizens of London can only look on helplessly across the River Thames as Parliament burns, lighting up the night sky in thrilling yellows and oranges that are reflected on Westminster Bridge. In fact, Turner directly witnessed the fire, and sketched the scene in watercolors before completing the painting in oils. This must undoubtedly be how he was able to capture the imagery so evocatively.

The themes of Romanticism in painting live on, even as many other movements have followed. So long as the subjects exist, painters will always have an interest in depicting the sublime and heroic.

What is your favorite Romantic painting?