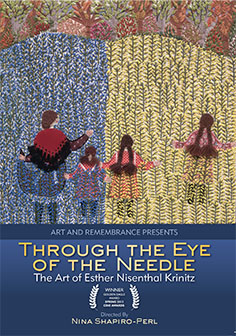 How do you tell a story when words won’t do it justice? Holocaust survivor Esther Nisenthal Krinitz turned to embroidery and needlework to recreate the images of her childhood, in order to share the story with her own children.

Read on to learn more about Ester’s amazing story, as told in the film Through the Eye of the Needle: The Art of Esther Nisenthal Krinitz.

The award-winning documentary film Through the Eye of the Needle: The Art of Esther Nisenthal Krinitz (preview here) takes a close look at Esther’s art and story. Esther started the first of these panels at the age of 50 and went on to create 36 exquisite wall-sized fabric collages with embroidery to tell her story of survival – before, during and after Holocaust in her native Poland.

I had a chance to speak with the film’s director Nina Shapiro-Perl, about her film and the ongoing dissemination of Esther’s remarkable story of courage, survival and hope. Here’s what she said…

Nina, what were the events that led up to you making the film Through the Eye of the Needle?

I first saw the art of Esther Nisenthal Krinitz about 30 years ago. Esther’s daughter, Bernice Steinhardt was a friend of mine. Our children went to nursery school together in Chevy Chase, Maryland. When I visited Bernice’s home, I saw this art on the wall, and it was breathtaking. It was her mother’s art.

I learned the family’s story. Esther, who passed away in 2001 at the age of 75, was a survivor of the Holocaust. The Nazis invaded Poland in 1939 and occupied her tiny village of Mnizsek for three years, subjecting the Jews to humiliation, abuse and intimidation. When Esther was 15-years-old – and a very brilliant and feisty young woman – the Nazis told all the Jews they must leave their homes the next morning for the railroad station, or else they would be shot. Knowing that death awaited her, Esther begged her parents for the name of someone, someone not Jewish, that Esther could stay with. Her father blurted the name “Stefan” and Esther took off with her sister Mania, the next day, to find Stefan. They said goodbye to their family – and never saw them again. Esther lost everything in the war.

After the war, Esther met her husband in a Displaced Person’s camp in the American Zone in Germany and emigrated to Brooklyn, New York, in 1949.  As the mother of two daughters, Esther always wanted her children to see what her life before the war… and after. She tried writing about it in different languages, but that just wasn’t her way of expressing herself.

That’s fascinating. So, she turned to embroidery?

Esther was always an excellent seamstress and embroiderer. She started sketching her childhood home on a piece of muslin. Then she started to embroider with all kinds of stitches. The finished piece was over 4 square feet and was a gift for her eldest daughter, Bernice. She finished it, and the reaction of her daughters and everyone else who saw it was so great that she created another one for her other daughter Helene.

The artwork is exquisite and also mysterious because it deals with such a very painful subject in such a beautiful way. There is brutality juxtaposed with exquisite beauty in the very same piece. They are very compelling, and many Holocaust scholars that look at them are astonished by her work. Some say, “We’ve never seen the Holocaust treated like this.” The power of them comes from being an eyewitness to the witness, to stand in Esther’s shoes as a teenager and see Jews of her village marched off by the Nazis to their deaths. It’s one teenager’s experience within the epic of the Holocaust. It’s very personal. At the bottom of almost all of the art pieces is a very short and simply-stitched narrative that tells you what you are seeing. She wanted you to know. She was a great storyteller.

How did the idea for the documentary come about?

As I mentioned before, I first saw this artwork in my friend’s house. I actually saw a new work go up on the walls every nine months or so during this period. From the moment I saw the work, I said to myself, “This would make an incredible documentary.” That was 30 years ago, and I didn’t start the film until 10 years ago, working steadily on the film throughout 2009 and finishing the piece in 2011. It’s won a lot of awards and brought attention to the story. 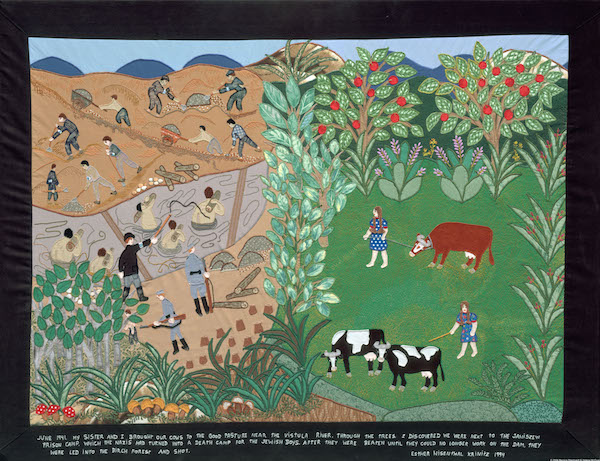 Do you have a favorite image or story from Esther’s collection?

I think the most riveting picture is this one where the Nazis are occupying the village. It’s called “Janiszow Prison Camp.” It tells the story of Jewish boys who were forced to work in a labor camp. They were whipped and beaten, then taken away to be shot in the forest. Esther witnessed this all through the trees where she was pasturing some cows. You have the center line separating the horrific labor camp from this gorgeous pastoral scene. The grass is all embroidered in different shades of green reflecting shadows cast by the clouds. It’s unbelievably intricate.

In the film, I wanted to explore how an image like this could hold both beauty and horror at the same time. I interviewed psychologists and a folklorist to help me understand that, because Esther herself didn’t talk much about that.

What kind of response have you seen from the film?

The film was produced by Art and Remembrance, a non-profit organization dedicated to sharing Esther’s story with the world. Through the traveling exhibit of Esther’s work; the book, Memories of Survival; the film; and the website, www.artandremembrance.org, Esther’s story has been used to educate people around the world about the Holocaust and other forms of injustice. Art and Remembrance has begun a new initiative called HeArt and Story. After seeing the film, community members – many who have experienced war, intolerance, abuse and even genocide, themselves – have the chance to tell their own stories with materials, cloth and thread, allowing them to experience the healing power of art. It’s very gratifying that my film can be a catalyst for people to tell stories of their own and help heal our world.

To view images of Esther’s fabric collages with embroidery, visit the Art and Remembrance website. Here you can also find the film, Through the Eye of the Needle, available for purchase on DVD.

Have you ever used or witnessed the healing power of art? Share your story in the comments section below!