Holiday lights are a wonderful photography subject, but they are often difficult for your camera’s sensors to interpret. This post will explain how to use exposure compensation to “tell” your camera exactly what kind of shot you want for your holiday lights. 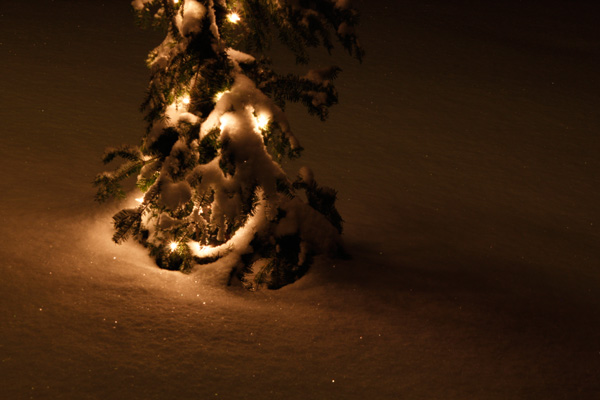 Photos via Boost Your Photography

What is exposure compensation?

Exposure compensation is a line graph that you can use to tell your camera whether you want it to capture shots that are either darker (negative values) or brighter (positive values) than its calculated exposure. Most DSLR and point-and-shoot cameras have an exposure compensation option, as do some camera apps for your phone’s camera.

When shooting in any mode other than full manual, your camera analyzes the light available in a given composition to determine which settings (ISO, aperture and shutter speed) will give a correct exposure. In many, many situations, your camera does a great job interpreting the scene. But when it comes to holiday lights, that is not always the case. This is when knowing how to use exposure compensation can make a big impact in your photographs.

When photographing your Christmas tree indoors, you often want a warm and inviting glow coming from the lights on the tree. When you camera sees a bright, glowing tree, however, it will often choose a dimmer exposure for your photograph to counteract the brightness of the lights. This can result in a photograph that looks less interesting or glowing than your tree does in person. 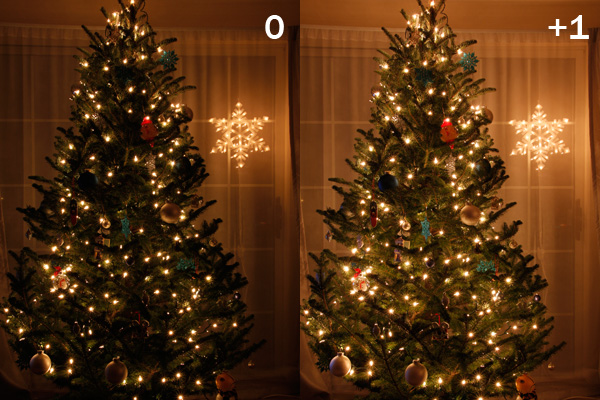 If you are shooting with a DSLR camera, you have the additional option of shooting bracketed exposures, where your camera will automatically shoot a series of photographs at varying exposures (usually three or five shots). So, you could try a series of shots at 0, +1 and +2 for example. This is a useful way to shoot a series of varying exposures so that you can easily pick your favorite later, after you have downloaded your shots to your computer and can view them on a larger screen.

With outdoor lights, the effect you want is often the opposite. Outdoor lights look best if they are photographed during the blue hour, the time after sunset when there is still some light in the sky. Photographs shot during the blue hour will have a blue or purple glow to the sky rather than the pure black of later in the night. 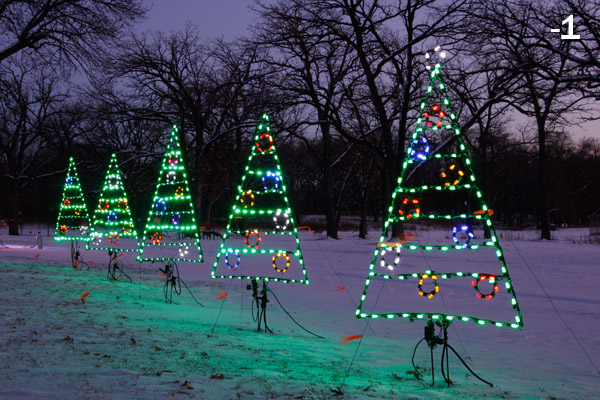 When your camera analyzes a darker night scene, however, it will often choose an exposure that is much brighter than the actual scene. This is when you use exposure compensation in the negative direction to instruct your camera to record a darker exposure than it originally calculated. 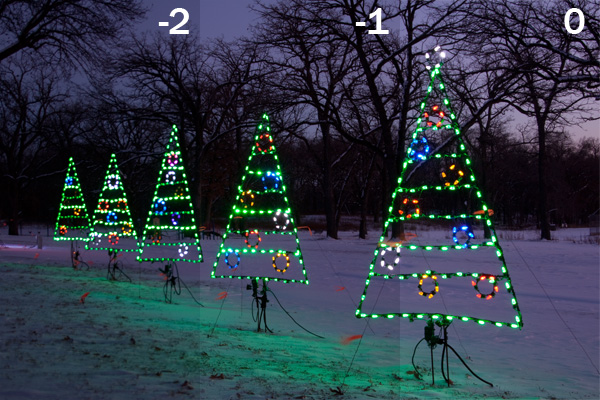 A -1 or even -2 exposure compensation value is a good place to start. If you are shooting bracketed, take a series of shots at -2, 1 and 0 for comparison. This will allow you to make a final decision about exposure on your computer at home. 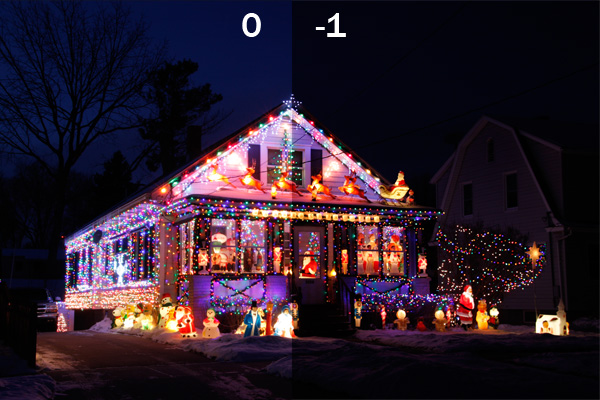 With the photographs above, you can see that the 0 exposure makes some of the glowing characters too bright — they appear as glowing bright shapes, rather than identifiable characters. In the -1 version, the characters are properly exposed, and you can see their details. The deeper blue color in the sky also gives more contrast to the lights and the house. Different people may prefer different versions for different reasons. Using exposure compensation to shoot a range of exposure values gives you more options.

How will you use exposure compensation in your photos?