Movement is an important part of creating captivating artwork.

While “motion” and “movement” might immediately imply action, they can also be employed to add a bit of dynamism even to static scenes. A bit of movement breathes life into a piece of artwork, and keeps the viewer’s eyes engaged in the world you’ve created, regardless of whether you’re drawing with graphite or working in pen and ink. 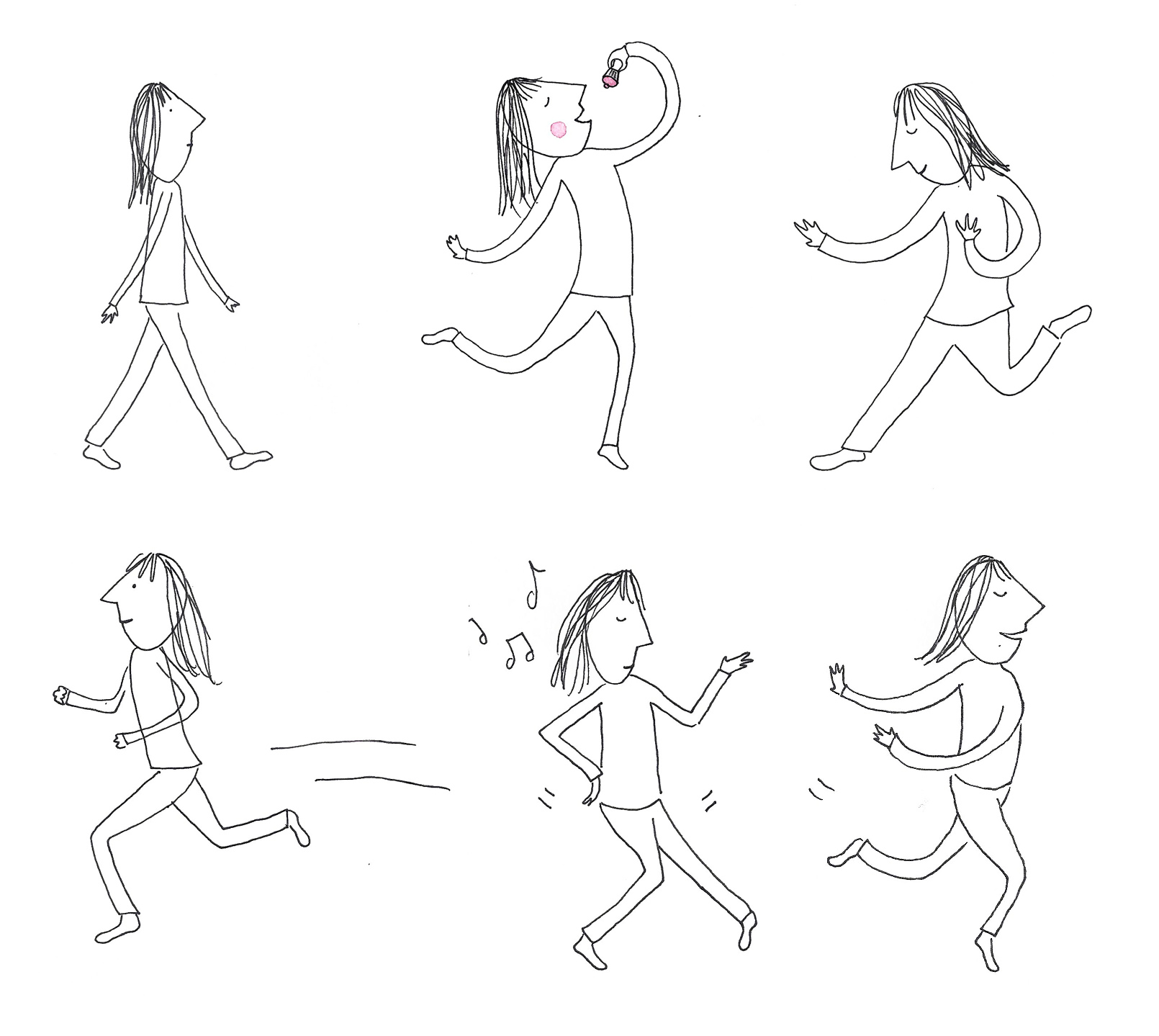 Artwork and photos via CakeSpy

There are many different tips, tricks and techniques for adding movement to your artwork. Here are several highly-effective methods for adding motion that you can easily incorporate into your next piece.

If you don’t quite know where to start, take some time to practice capturing movements by taking a cue from a common art school exercise. Sometimes, models will do a series of very short poses for figure drawing — 10 seconds or even less each — and the artist’s job is to capture the movement as powerfully, quickly, and effectively as possible. The drawings tend to come out quite abstractly, but it is a great way to master movement.

No, you don’t need a live model (clothed or unclothed!) to start practicing drawing in this method. You can replicate this by capturing movements of actors in movies or on TV. Recordings of dance performances are also a great way to begin acquainting yourself with anatomy, movement, and form.

The way in which you lay down line work can effect the apparent motion in a piece. Here are some ways to begin refining your lines. 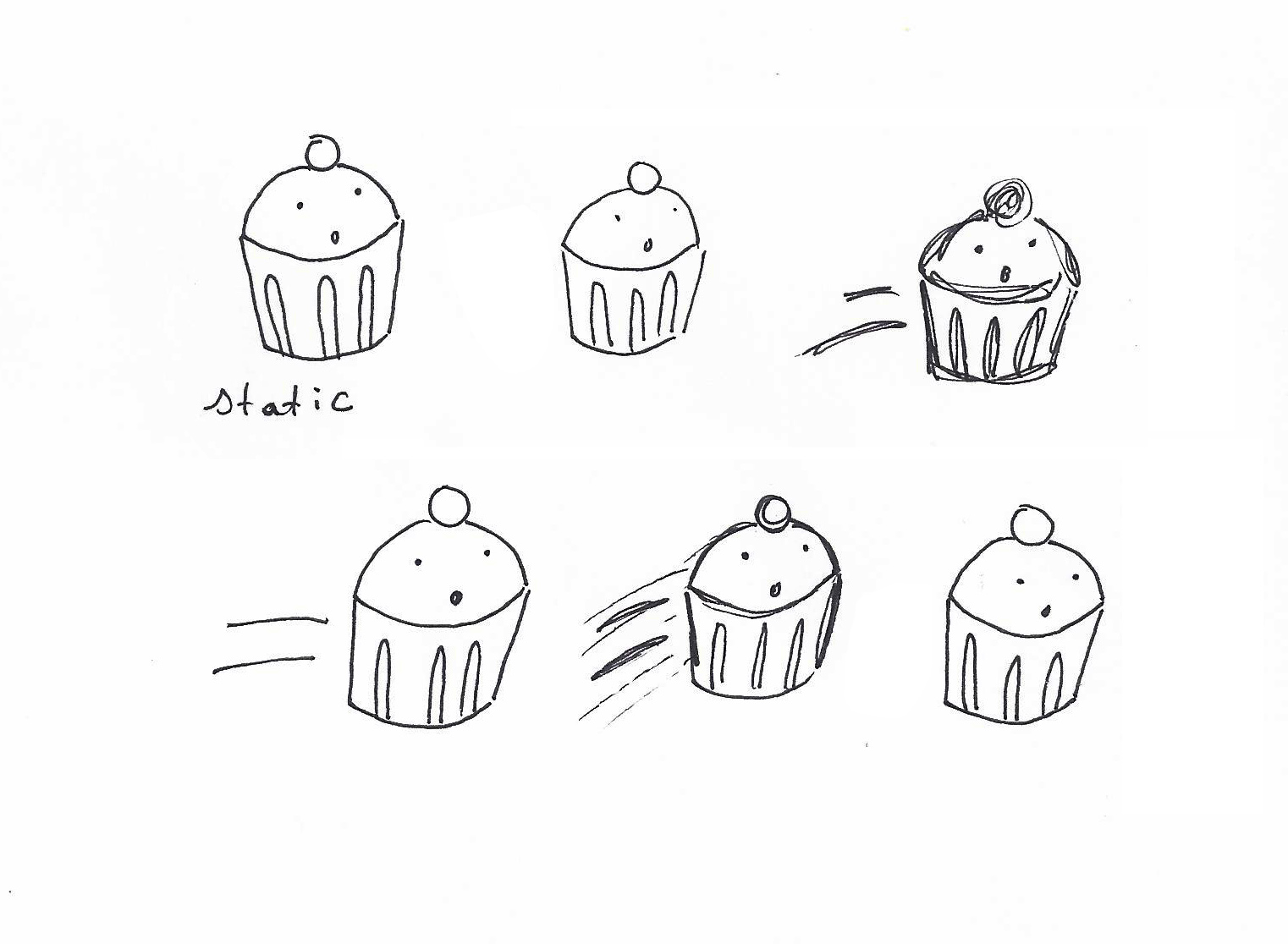 In the above illustration, there is a fairly static character pictured top left. However, there are a variety of easy and small adjustments to imply movement.

You could simply use a thin, quickly applied line, as in the top middle image, to add movement. Or, you could use thicker, sketchy lines to make the image crackle with life, as illustrated by the top right image. You could lean the image, which suggests forward movement. Perhaps you could even use a variety of these methods to see what feels natural to you. 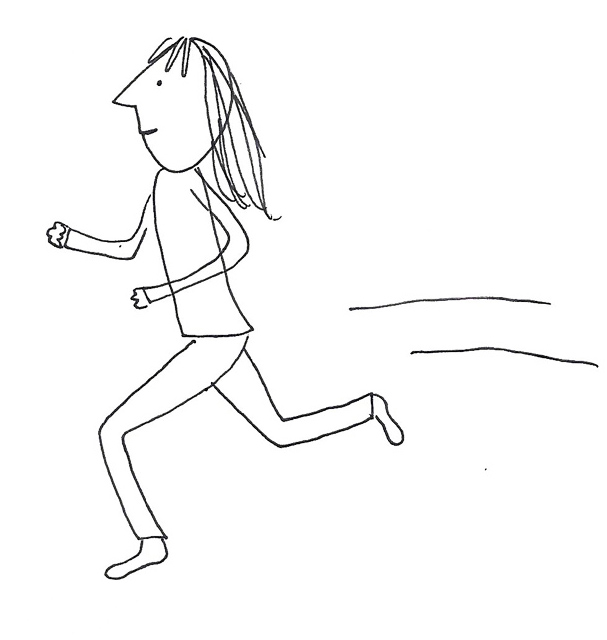 It’s one of the oldest tricks in the book, but still effective. Adding lines to imply motion, from a car moving to a jaunty jogger or spiraling lines to represent wind can be a simple and beautiful way to convey motion. 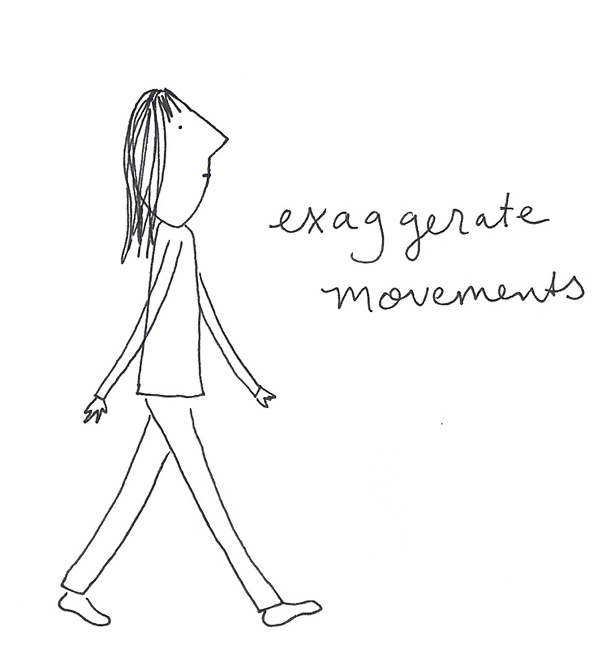 Working your lines to form an exaggerated version of a motion can also be effective. For instance, not all people literally swing their arms while they walk like the character pictured above. However, an exaggerated version of a movement is effective in getting the point across in illustrated form. The work of Keith Haring is a fantastic example of conveying motion through exaggerated movement, with bold, thick lines forming characters with limbs askew to represent a kind of dancing motion.

Reference images can be a fantastic way to gather information about movements, offering you a chance to capture the main motion of a movement and helpful information so that you can accurately capture the anatomy of a movement: Where do elbows go when you run? How do feet look when you dance?, etc. 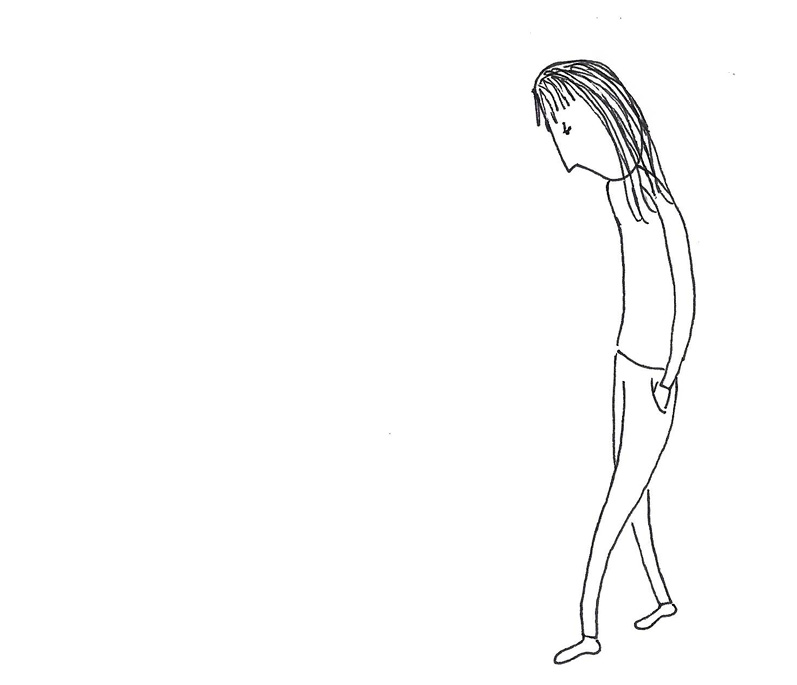 Adjusting expressions will add context and emotion to any motion you’re trying to capture. Just as motions are exaggerated to convey movement, facial expressions should match. In the image above, a languid walking pose is rendered a shuffling morose movement due to a downturned expression and heavy-lidded eyes.

Create movement with your composition 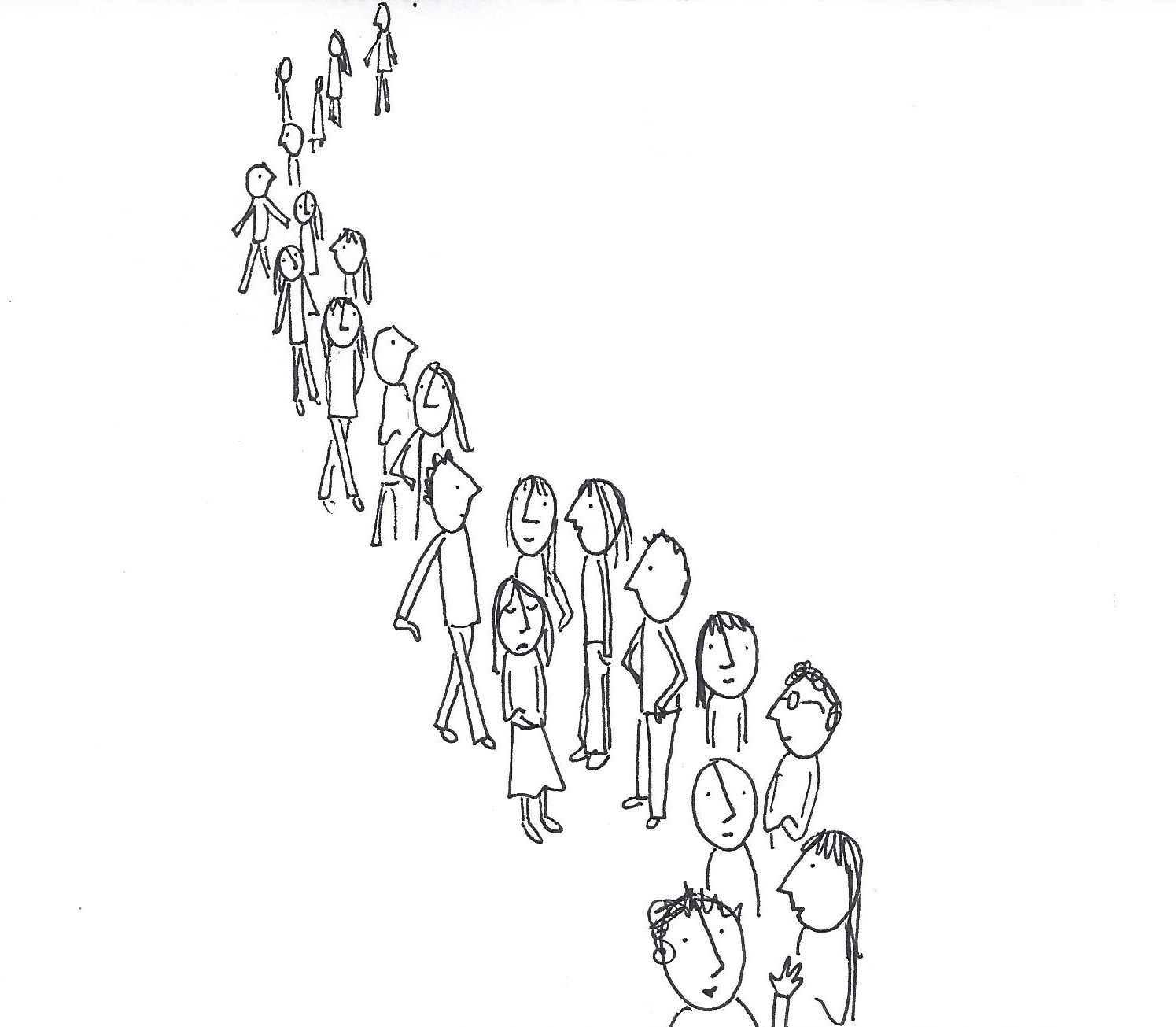 You can take this concept further by creating a scene in which there are close up and further away elements, which only adds to a sense of motion.

Further your movement with color 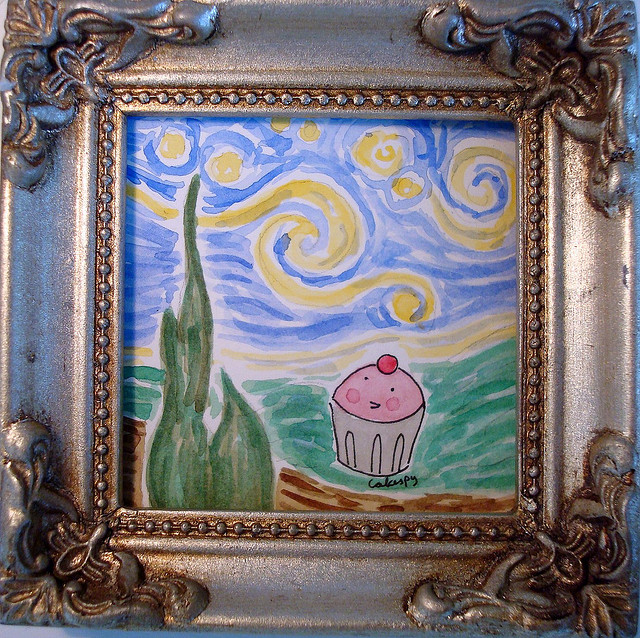 Color can further accentuate movement in your pieces. Watercolor, with its fluid, liquid color variations, adds movement practically without trying, as does a lushly layered application of colored pencil or pastel.

Flatter media such as marker or acrylic won’t add much movement by themselves, but this doesn’t mean that they can’t be used in clever ways to add more movement. For instance, the famous painting “Starry Night,” rendered in oil. Oil paint colors are fairly flat, but by combining colors to create natural gradients and by forming swirls of wind with thickly applied paint, a deep sense of movement is created.