Dogs and puppies: they’re not only man and woman’s best friend, but they make for the cutest and sweetest decoration inspiration for cakes! From grandiose canine-inspired centerpieces to adorable pup-cakes, these treats are far tastier than a milk bone, and awfully doggone cute! 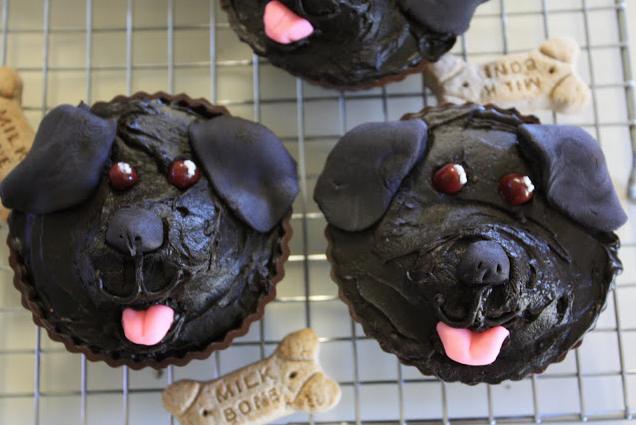 [one_half_last]Black Lab Cupcakes: These cupcakes by Munchkin Munchies may look like the black lab that inspired them, but rest assured, the flavor is all dark chocolate delicious. Dark chocolate buttercream frosting makes the face, which is accentuated using fondant tinted with gel dye for the ears, nose, and tongue.[/one_half_last] 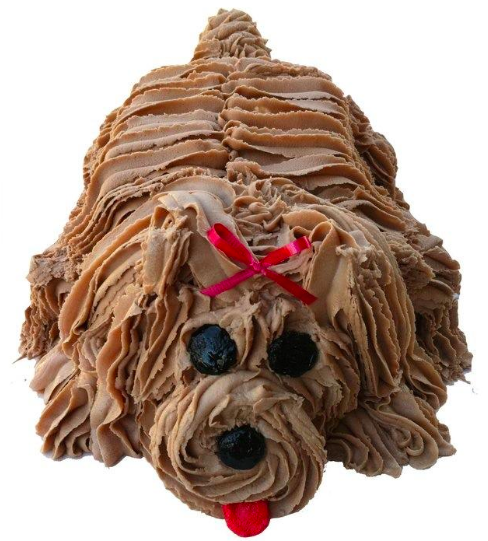 [one_half_last]Fluffy Puppy Cake: Creative piping is the secret behind this sweet-as-sugar cake which was made to resemble a fluffy pup! Starting with a cake shaped like a log (or even a brick shaped “loaf”), the secret to creating this type of cake is patience with piping: go mad and get creative with your swirls of frosting to create a fluffy “coat”!
[/one_half_last] 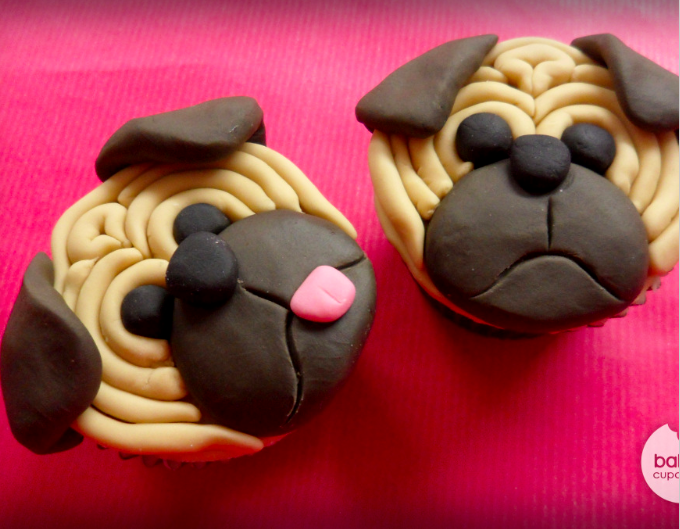 [one_half_last]Pug Cakes: Baked Cupcakery cleverly shapes snakes of tan-colored fondant into swirls which, when assembled, resemble the wizened “wrinkles” of a pug! When accentuated by fondant ears, eyes, and a pink little tongue, this is the type of cupcake that just might be coo-inducing.[/one_half_last] 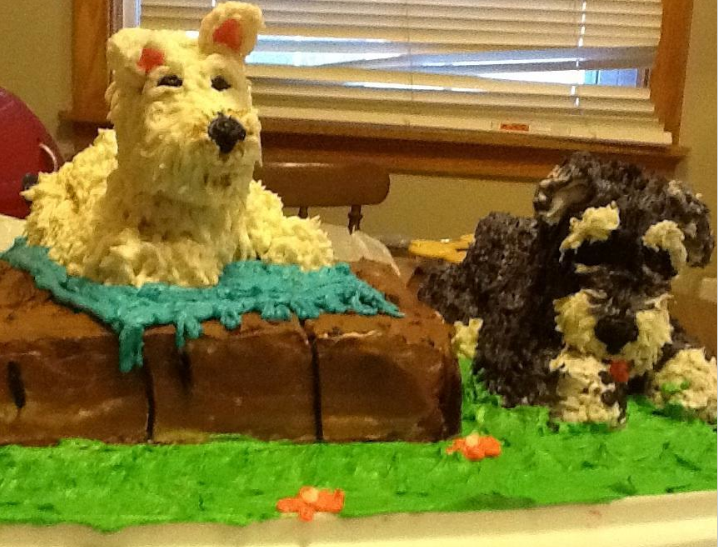 [one_half_last]Puppy Cakes: These fluffy pups are the result of some creative confectionery architecture–the bodies were made using Rice Krispies Treats, which are solid and easy to mold–and a lot of frosting, piped in small spurts to resemble short-haired fluffy terriers. This project is by Bluprint member Beetz1224.[/one_half_last] 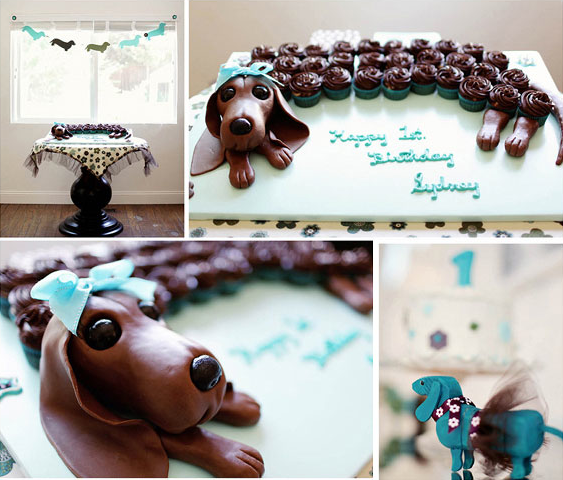 [one_half_last]Dachshund Cake: This is an extremely clever way to translate the sausage-like shape of a dachshund in cupcake and cake form. Start with cake covered with chocolate fondant for the head, tail, and paws; fill in the middle with a trail of cupcakes! This suggestion of a midsection not only acts as a fun centerpiece, but is open ended in terms of how many cupcakes you can offer, depending on your guest list. So it’s clever and functional![/one_half_last] 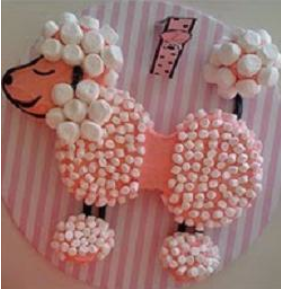 [one_half_last]Poodle Cake: Who’s looking all prim and proper and pretty as a picture? This sweetly decorated poodle cake, of course! Starting with a carved cake topped with pink buttercream, it’s the marshmallows that really give this cake the cloudlike look of a perfectly coiffed poodle![/one_half_last] 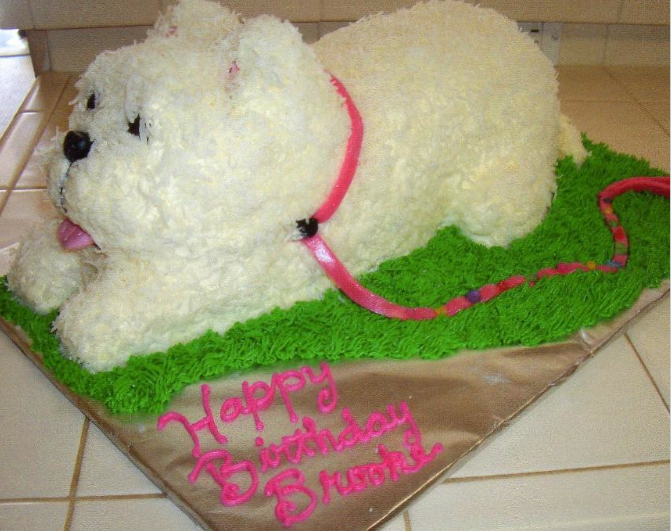 [one_half_last]Fluffy Dog: Fans of American Girl will recognize the dog Coco. The way to convey this white adorable fictional dog’s look? Coconut, of course! The body of this dog is vanilla cake, and the head is made from moldable Rice Krispies treats. The topping is simple: vanilla buttercream frosting and shredded coconut, with fondant and rock candy decorations. But it doesn’t just look pretty, it’s a decadent treat, too: the filling is chocolate cream cheese![/one_half_last] 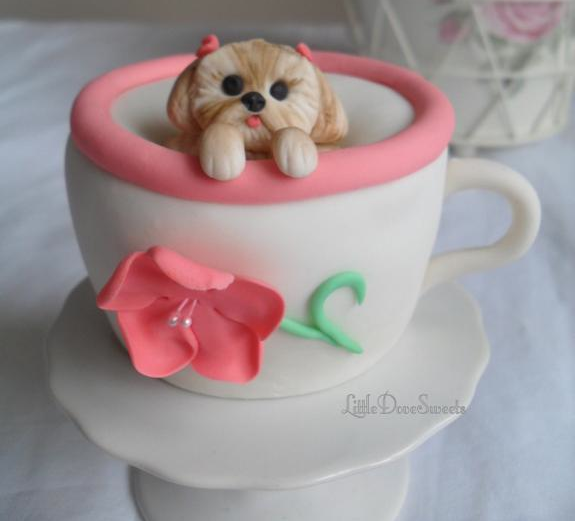 [one_half_last]Shih Tzu in a Teacup: Not that there’s a contest, but if there were one, this cake would win for most adorable thing ever. Creative Bluprint member LittleDoveSwts created this sweet treat using a large cupcake pan to create the cake that became the teacup. After covering it with vanilla fondant, it was garnished with a beautifully intricate and incredibly cute gumpaste shih tzu sculpture. Once again, in case you missed it: adorable.[/one_half_last]

Ready to create your own canine cake? Enroll in Sculpted Dog Cake with Elisa Strauss today!

Don’t worry, we didn’t forget about the cats! Be sure to come back to the Bluprint blog on Thursday afternoon for a beautiful roundup of feline-inspired cakes! You might also enjoy tricky treats: cakes that look like other foods, magic in the middle cakes, and fun cakes.