Most, if not all, quilters have heard of the legendary Dear Jane Quilt. Jane A. Stickle, who was born on April 8, 1817 in Vermont, is the creator. Jane made the quilt during the Civil War, completing it in 1863. It is a sampler quilt, comprised of 169 square 5” blocks, each one different. There are also 4 pieced corner triangles, 52 pieced border triangles, and a unique scalloped border. Altogether, there are an astounding total of 5,602 pieces in this quilt! The Jane Stickle Quilt is a well known and much loved masterpiece. 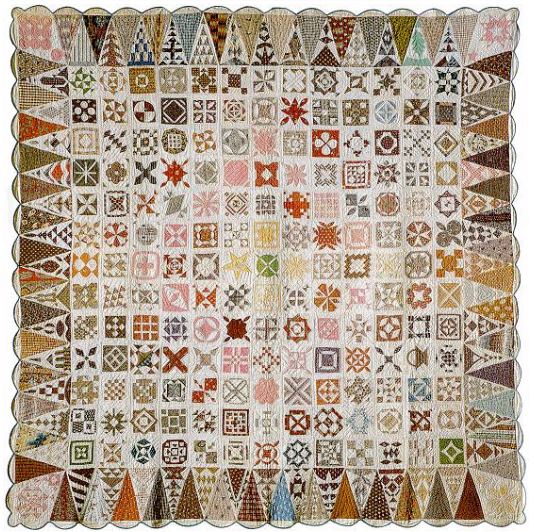 In 1996, Brenda Manges Papadakis published a book called Dear Jane: The Two Hundred Twenty-Five Patterns from the 1863 Jane A. Stickle Quilt. Thanks to Brenda and her informative book, quilters around the world have been able to recreate their own unique versions of the beloved Jane Stickle quilt.

How did this Dear Jane book come about? After seeing the quilt for the first time in a book called Plain and Fancy by Donna Bister and Richard Cleveland, the author Brenda Manges Papadakis fell in love. She was completely intrigued by the quilt. The math teacher in her was intrigued by the geometric shapes, while the artist in her was drawn to the unique composition and design. She was fascinated by the blocks. Though Brenda was very familiar and well versed in so many different quilt blocks, there were quite a few included that she didn’t even recognize. The creation of her own Dear Jane quilt (or Baby Jane, as she fondly calls it) began after a friend challenged her to draft the quilt blocks for herself. She did this using the photograph from the Plain and Fancy book as well as other photos people had taken of it. She could only draft so many blocks this way, so she put in a request to visit the quilt in person at the Bennington Museum in Vermont. Brenda’s request was granted, and she spent several days learning the history of Jane Stickle and tracing her quilt blocks.

The result of Brenda’s fascination and utter devotion is a helpful book that has allowed so many quilters to create their own version of the Jane Stickle quilt. To begin making your own Baby Jane, start with her book, which can be found here. Be sure to visit Brenda’s website to find all kinds of valuable tips and resources.

The original Jane Stickle Quilt can be found in the Bennington Museum in Vermont, and people from all around the world travel to visit it. It is on display for a limited amount of time every year in order to preserve the quality of the quilt and protect it from sun damage. This year is marks the 150th anniversary of the creation of this quilt, and it can be seen at the museum from August 31 through October 14. Read more about it here!

Get the skills you need to create the Dear Jane Quilt with Bluprint’s online class Precision Piecing with Norah McMeeking.

In case you missed it, get involved in the discussion around the merits of hand piecing versus using a machine. Then come back to the Bluprint blog tomorrow for a behind the scene peek at The Quilt Studio, an inspirational quilting retailer in Omaha.