Though dinosaurs may be extinct for  millions of years, the fascination with these incredible creatures remains very much alive, especially with the release of the Jurassic World film from the wildly popular movie series!

Have a roarin’ good time with these dinosaur cupcake toppers for your next prehistoric expedition! 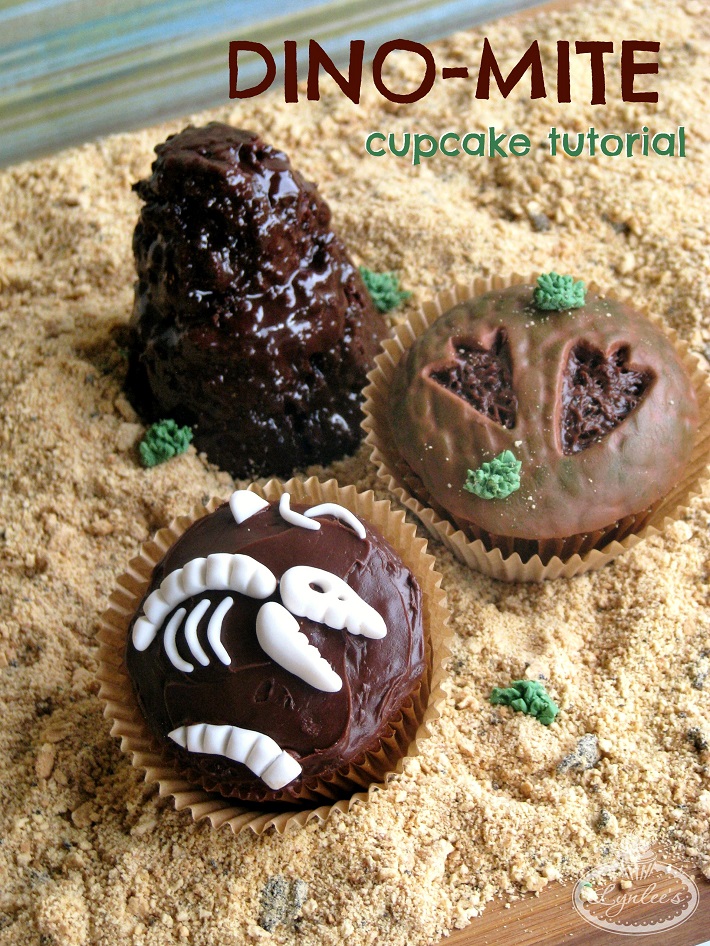 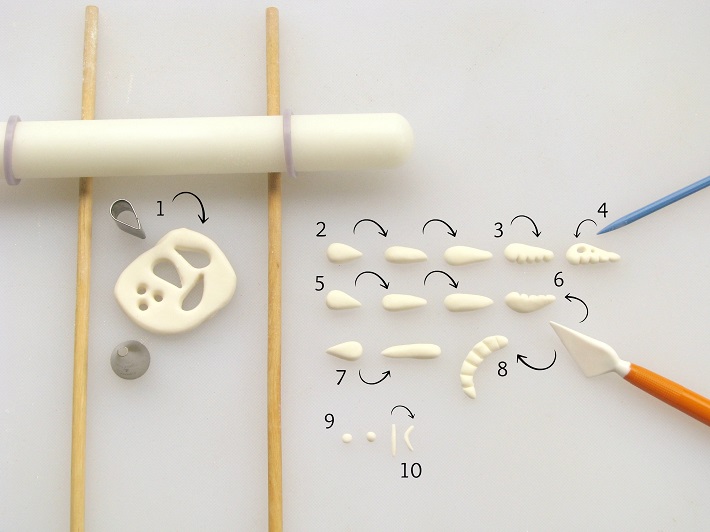 Roll out white fondant thick with the rolling pin and 1/4″ wooden dowels as guides. Punch out three teardrop shapes with the cutter, along with three small circles with round decorating tip #7.

Take one of the white teardrop fondant shapes and begin to round out the perimeter with your fingers. Spread a bit of vegetable shortening, if necessary. As you round it out, simultaneously elongate it by stretching the fondant a tad to create the top of the dinosaur skull.

Utilize the knife tool to make several indentations at the bottom of the shape to create teeth marks.

With the small modeling stick, make an oval-shaped indentation, piercing through the fondant to create an eye socket. Make a smaller round indentation right next to it.

Take another white teardrop fondant, spread a bit of vegetable shortening on it and begin to round out the sides, while stretching it out a bit (same as above).

Utilize the knife tool to make the teeth indentations, this time doing it on the top of the shape and rounding out the opposite end a bit to form the bottom of the jaw/skull.

Take the third and final white teardrop fondant shape, spread some shortening over it and begin to stretch it, while forming it into a crescent shape.

With the knife tool, make horizontal indentations along the length of the of the white, elongated fondant to create vertebrae. Re-shape the fondant, if necessary. 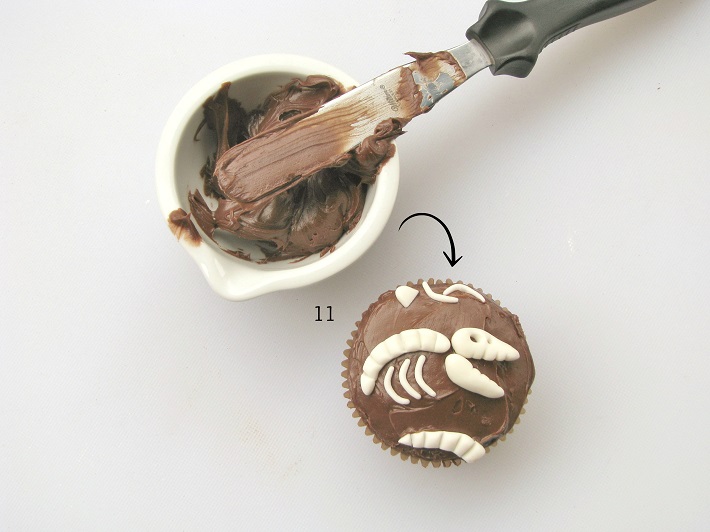 Cover your cupcake with chocolate icing utilizing the small spatula, then place the dinosaur bones over the icing. Create additional bones to decorate the cupcake, if desired! 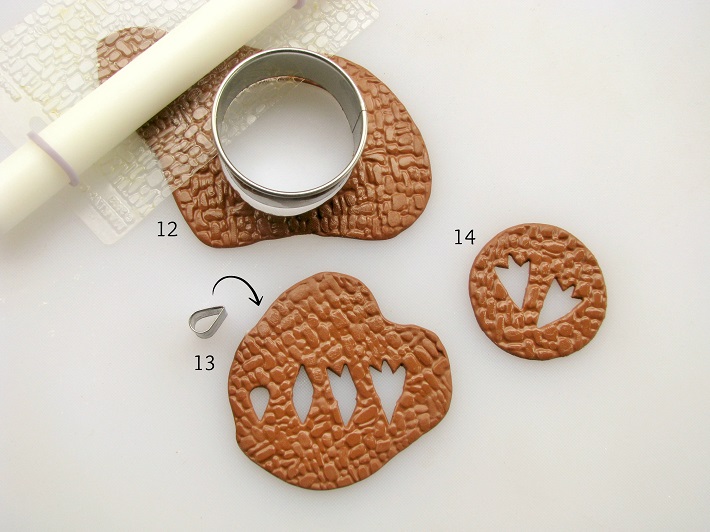 Roll out brown fondant with the rolling pin, a bit thicker than 1/8″. Spread vegetable shortening over the surface of the fondant, then place your embossing mat over it. Roll the pin over it to emboss the pattern on the fondant, utilizing the 1/8″ guide rings to keep the thickness uniform.

To create the first dinosaur track, take the small teardrop cutter, turn it upside down (narrow tip facing down) and press it down on the embossed fondant. Remove the cut-out fondant, turn the cutter right side up, place it at the edge of the cut-out, then make another cut in the opposite direction. With the cutter still facing up (narrow tip facing up), slightly turn it to the left to cut out another toe. Finally, slightly turn it in the opposite direction to the right and cut out the remaining toe. Repeat this step to make the second footprint, making sure they are close enough together to fit within the circle cutter.

Utilize the 1 1/2″ round cutter to punch out a circle from the fondant with the dinosaur tracks in the center. 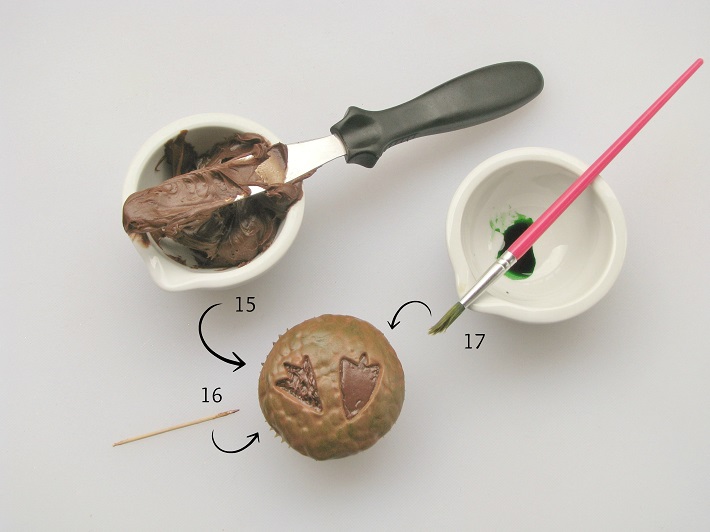 Cover another cupcake with chocolate icing, then place the round fondant with the cut-out dinosaur tracks over its surface.

Utilize the tip of a toothpick to make little strokes and indentations in each of the footprints to add texture.

Mix a tiny bit of green soft gel paste with clear alcohol (i.e. vodka) and very lightly paint the surface of the fondant. Make sure the mixture is fairly diluted for just a slight tint of green. 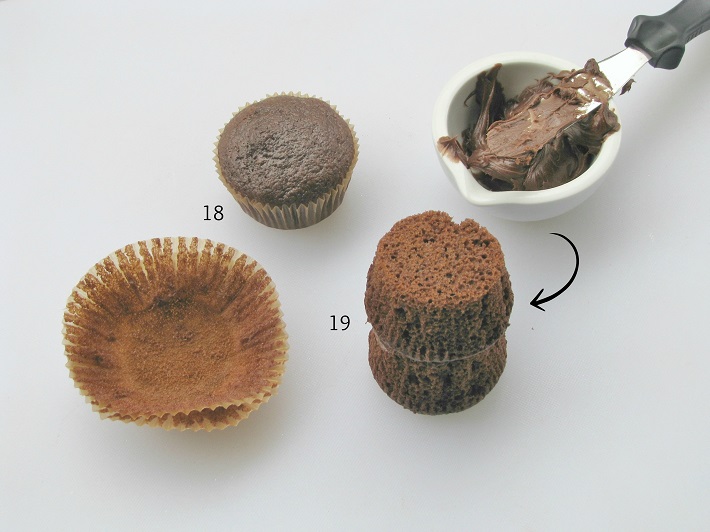 Remove the wrappers of two cupcakes and turn them upside down. If the cupcake you are planning to use on the bottom isn’t quite level, cut off some excess with a knife.

Add some icing to what is now the top of the bottom cupcake (originally its bottom) and adhere the second cupcake on top (again, upside down!). 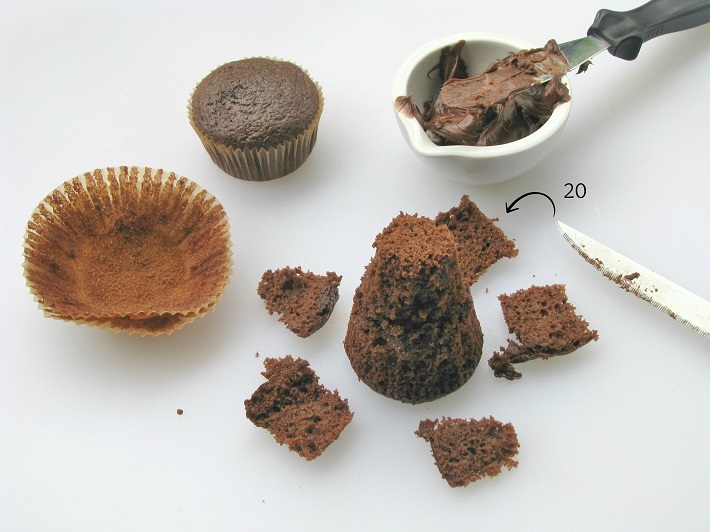 Utilize your knife to trim the top cupcake, shaping into a volcano shape. 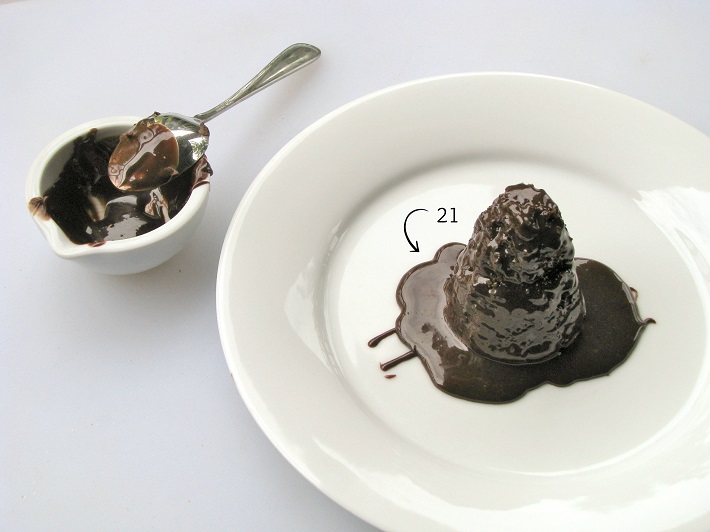 Microwave some chocolate icing for approximately 10-15 seconds (until it is melted), then utilize a spoon to drizzle it over the cupcake volcano. Allow it to harden prior to transferring it.

To add some greenery to your dinosaur cake toppers, take some green fondant, roll some pieces into balls, then utilize food safe scissors to make several cuts to the top, varying the cuts and directions. Also, if you want an erupting volcano, simply make a small hole at the top of the cupcake volcano, tint some white icing with red and orange hues and drizzle it over the top of the volcano as you did with the chocolate, but in smaller quantities! 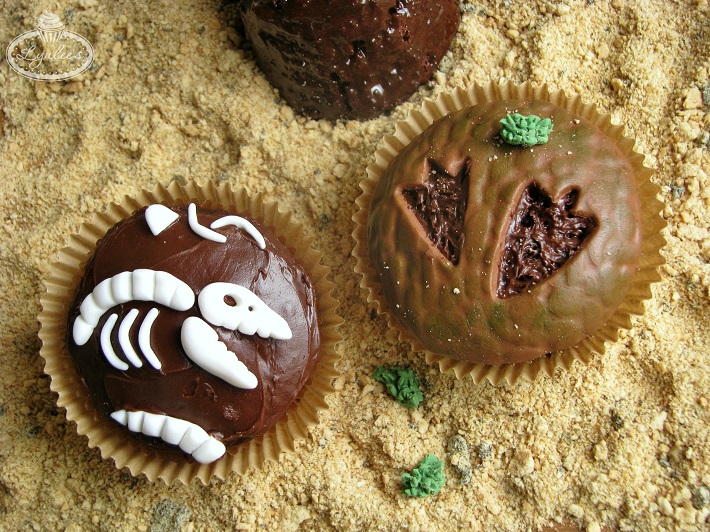