I’m at the point in my photography career where I can walk into a wedding or portrait session with a client and nail all the important shots without thinking too much about it. I have some standard angles and poses for people that work just about every time no matter what type of light I’m dealing with. But in order to keep things interesting for myself and to keep clients from feeling like they are being put through a standard photography formula, I like to get at least one shot that I’ve never done before and pushes me to think a little harder.

To me, a creative portrait must have some deeper meaning behind it. Usually, it’s personal to the subject, ironic to the viewer, or identifies something about the subject that you may not have otherwise have known. 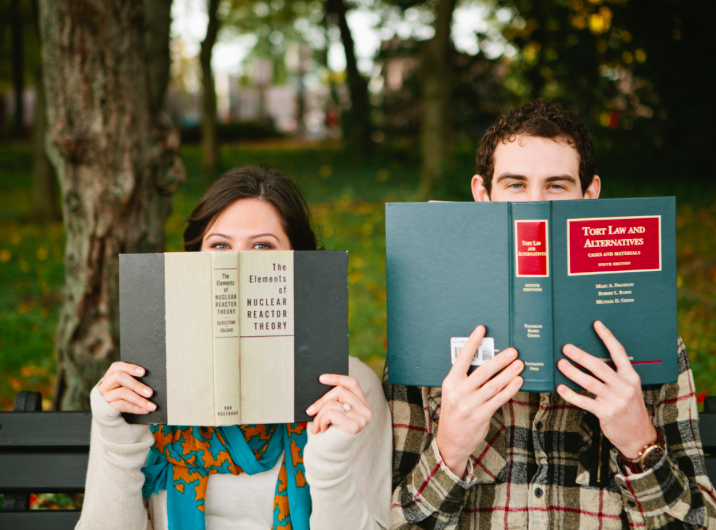 For the portrait above, my engaged clients were getting advanced degrees in Nuclear Physics and Law. Obviously, they are super smart and well matched in intellect. To show that we used some of their textbooks, burying their faces in the books enough that you can still identify the person but clearly showing the titles of the books. For the person that doesn’t know this couple, it’s a playful image just a little different from standard engagement photos. For the person that does know them, it sums up a lot about the couple and their similarities. 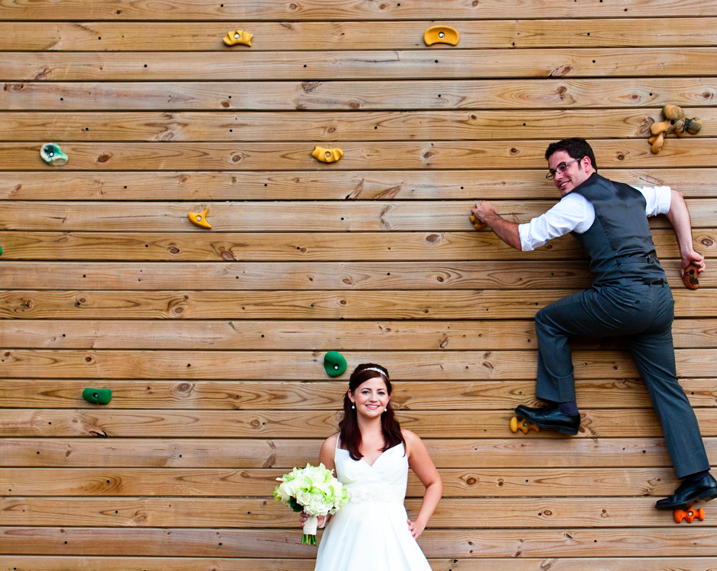 For the next portrait, I was shooting a wedding in a place that had a rock climbing wall in the back. The thought crossed my mind that, since the groom was pretty young and athletic, it might be a funny picture for him to be climbing the wall with the bride rolling her eyes in front of him. At the time I just thought it was a fun idea, but looking back there’s a lot of symbolism in an image like this: it could mean moving up in the world through marriage to a beautiful woman or it could mean he’s trying to run away from his new bride!

The point in these examples is that a creative portrait means something outside of the box. I can teach most people with the ability to learn something new how to light and pose a standard head and shoulders portrait of a couple. But a creative mind is hard to teach. This person comes up with something different—and hopefully something that hasn’t ever been seen before.

When I’m not feeling creative and need to come up with something new I try one of these things:

1. Come up with three words to describe your subject.

Then you can think of ways to show those words visually so that people can easily connect the dots.

Often times, I stick to using a 24-70mm lens. I’m comfortable with it, it’s sharp, the range of view is pretty normal for people. But as soon as I change to a wide angle or a telephoto my whole way of seeing an image is changed. The wide lens just asks me to include more of the surrounding scene and to include context. The telephoto compresses my background and gives portraits a whole different look. Sometimes, changing my lens means using a 50mm prime and taking away all the choice in focal length so I can just think about composing the frame rather than how I’m cropping.

Give your subject a reason for the emotion you want them to show by setting up a back story. Explain the scenario and ask them to react. Sometimes the reaction will be more creative than something you could have planned!

I will find an idea that I really like and take it one step further or execute it just a little bit better.