Have you ever heard of a flaming dessert called cherries jubilee? This is a jubilant dish if ever there was one: deep red cherries, heated with liqueur, which is then flambéed and served as a warm, syrup-like sauce over vanilla ice cream. It’s also a great way to impress guests at a dinner party, and a fantastic flavor to pair with cake. This tutorial will cover how to make cherries jubilee cupcakes, which offer the perfect, single-sized serving of the decadent dessert. 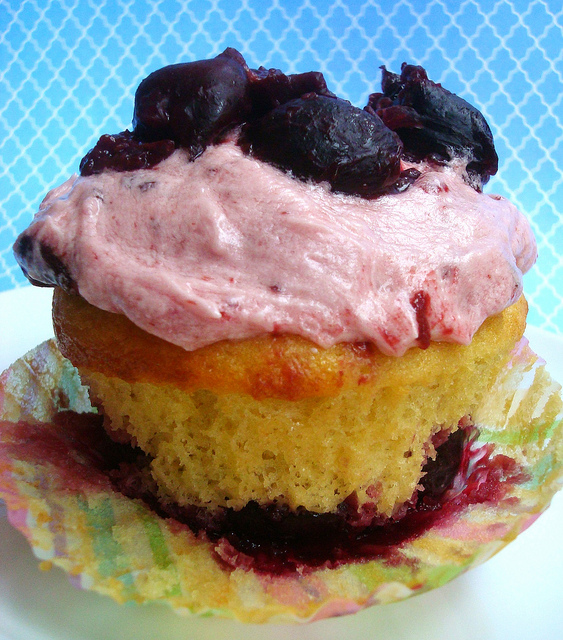 A bit of history:

Cherries jubilee was created in 1887 to celebrate Queen Victoria’s 1887 Golden Jubilee in the French Riviera. Its inventor was Auguste Escoffier, a famed French chef who is also partially credited in the development of the “mother sauces” of French cuisine. He created the flaming dessert to celebrate the Queen’s love of cherries in style. Then, as now, the masses wanted a piece of all things royal, so the recipe caught on like wildfire (pun intended).

Since then, the dessert has set hearts afire and inspired spinoffs (a famous one is bananas Foster, a New Orleans specialty) and even has its own holiday: September 24 is National Cherries Jubilee Day. To celebrate we’re sharing this delicious cherries jubilee cupcakes recipe. 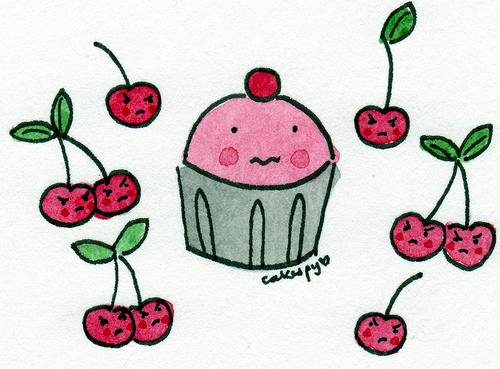 For some, the idea of making a flaming dessert is daunting. Luckily, there’s a way to have cherries jubilee sans flame, and eat some cake and buttercream, too: cherries jubilee cupcakes. These moist, decadent morsels are rich in caramel-y cherry flavor with a good swig of cognac for good measure. Using the cherries jubilee mixture as both filling and simple cake decoration makes for an easy-to-prepare treat that is the perfect way to enjoy all of the fun without the flame.

For the cherries jubilee mix:

First, make the cherries jubilee mixture. Place the frozen cherries in a large saucepan, and combine with the sugar. Let sit until the cherries become soft and begin to release juices. 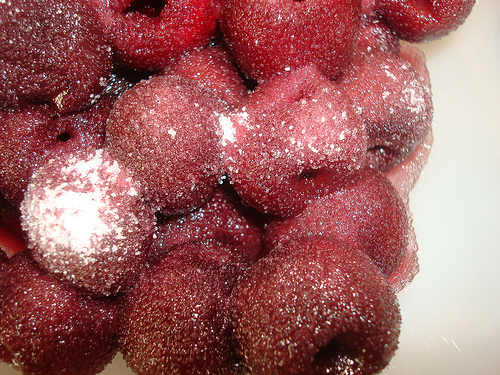 Add the cornstarch and stir well. Place the saucepan over a burner set on medium-low heat. Stir occasionally as the mixture begins to thicken and bubble. Once it is actively bubbling, add the cognac. Let it come to a boil, and once it does, stir frequently for 1 minute. Remove from the heat and stir in the butter, which should melt quickly in the residual heat. Set the cherry mixture to the side for the moment. 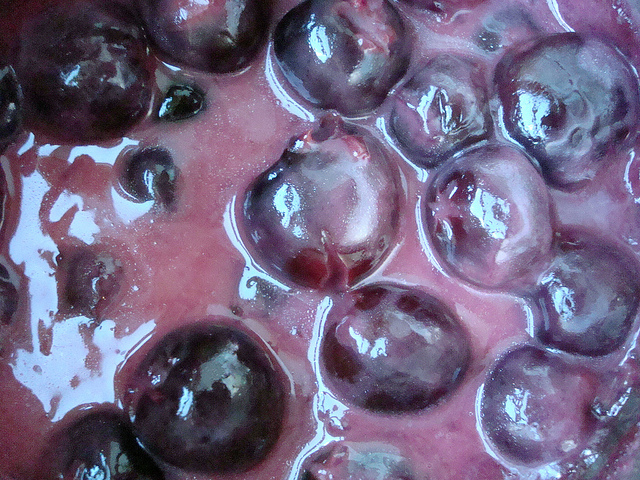 Whisk together the flour, baking powder and salt. Set aside.

In the bowl of a stand mixer fitted with the paddle attachment, cream the butter on medium speed until smooth, about 2 minutes, scraping the bowl as needed. Add the sugar and continue to mix until light and fluffy, another 2 to 3 minutes. Add the egg yolks one at a time, beating between each addition and making sure that each is incorporated before adding the next. Beat in vanilla.

Reduce the mixer speed to low and add the dry ingredients alternately with the sour cream, in 2 to 3 additions each, ensuring that each addition is fully mixed in before adding the next. Scrape down the sides of the bowl with a rubber spatula after each addition. Transfer mixture to a separate large bowl. 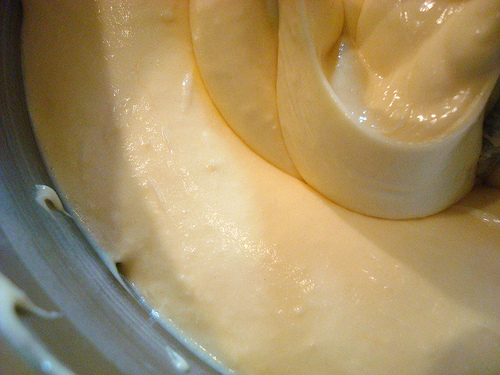 Clean bowl of stand mixer carefully. Add the egg whites and beat with the whisk attachment on low speed until frothy, about 15 seconds. Gradually increase speed to high and beat until soft peaks form, about 1 minute. Using a rubber spatula, gently fold the whipped egg whites into the batter. 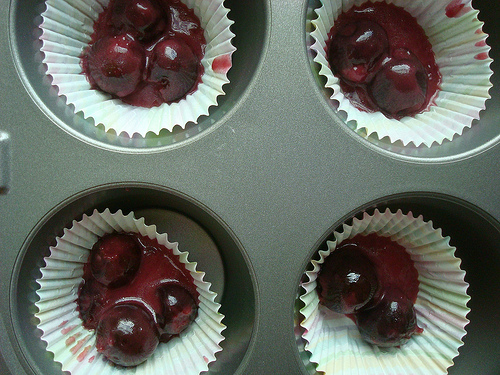 Bake the cupcakes for 20 to 30 minutes, or until golden, and a toothpick inserted in the center comes out clean.

Let the cakes cool in the pans for 5 minutes before transferring to a wire rack to cool completely. 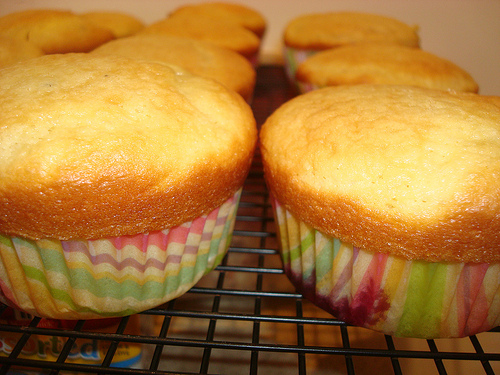 While the cupcakes cool, prepare the buttercream. In the bowl of an electric mixer fitted with the paddle attachment, combine the butter, 4 cups of the confectioners’ sugar, and vanilla. Beat on medium speed until smooth and creamy, 3 to 5 minutes. Gradually add the remaining sugar, 1 cup at a time, beating for about 2 minutes after each addition, until the icing reaches your desired spreading consistency. Once it has reached an ideal consistency, stir in two heaping tablespoons of the cherries jubilee mixture and lightly stir in, imparting a beautiful color and pleasing texture to the buttercream. 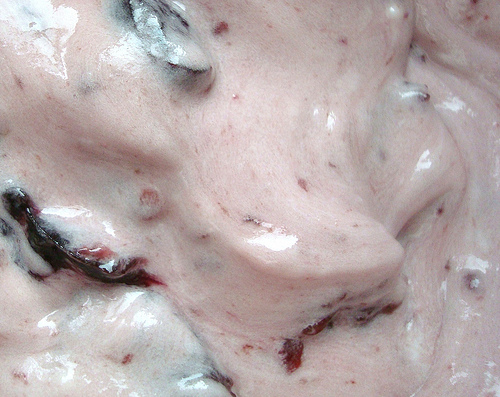 Note: If you prefer to have a more smooth buttercream, simply omit adding the cherries jubilee mixture. Here’s how your cupcakes might look with a straightforward tinted buttercream: 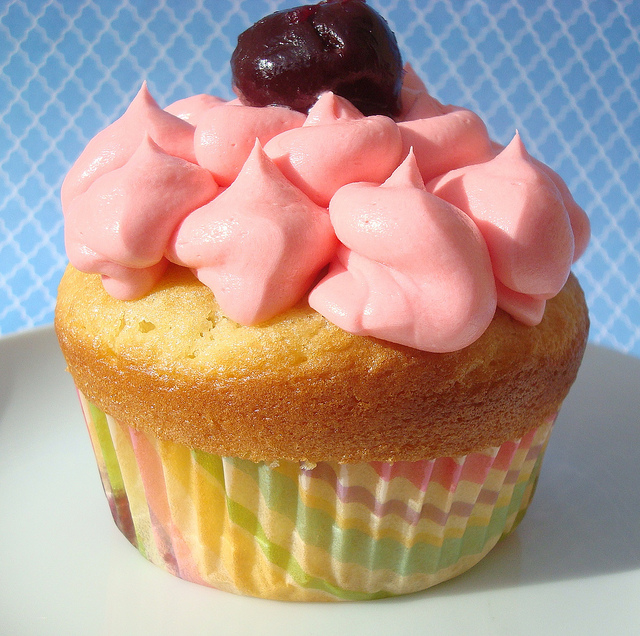 Once the cakes are cool, apply a dollop of buttercream on top of each, and garnish each with a spoonful of the remaining cherry mixture. 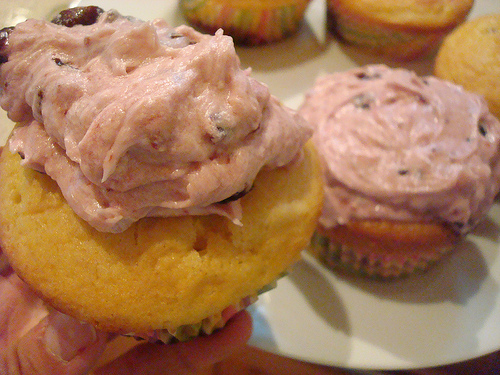 Tomorrow on the Craftsy blog, we’ll explore whether or not mixing fondant and modeling chocolate is a good idea. Come back to weigh in on the debate!