Change up your cast-on to add a new stylish edge to your knitting. The Channel Island cast-on creates a decorative picot edge at the bottom of your knitting that complements a band of garter stitch or 1×1 rib.. 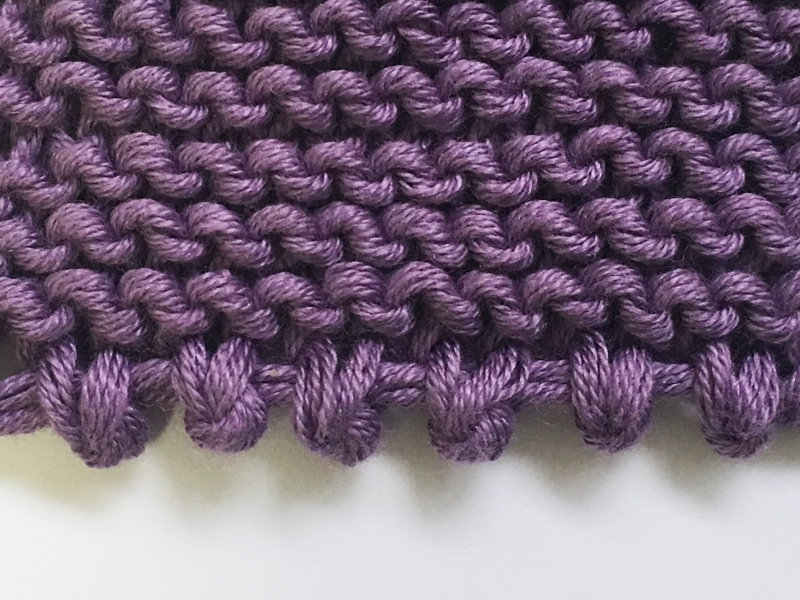 Inspired by the traditional hem of Gansey fisherman sweaters of the British Isles, the Channel Island cast-on is created by pairing a yarn over with a double-stranded stitch.

This tutorial includes step-by-step photos, tips for using the cast-on and four knitting patterns to try your new technique.

The channel island cast-on is a variation on the long-tail cast-on that uses a doubled strand of yarn for the tail and adds a yarn over to give more definition to the picot point. If you need a refresher for the long tail cast-on, see this tutorial.

Step 1: Set up your yarn

The Channel Island cast-on uses a double strand of yarn for the tail so when you measure out the amount you need for your tail, you will double that amount. Then fold the yarn tail in half with the cut end toward the working yarn. Unlike the long-tail cast-on, the loop of folded yarn, not the cut yarn end, will be your tail. The image below shows the folded double strand of the tail on the right and the working yarn on the left.

Throughout the cast-on process, you will treat the doubled strand of yarn as one piece of yarn. 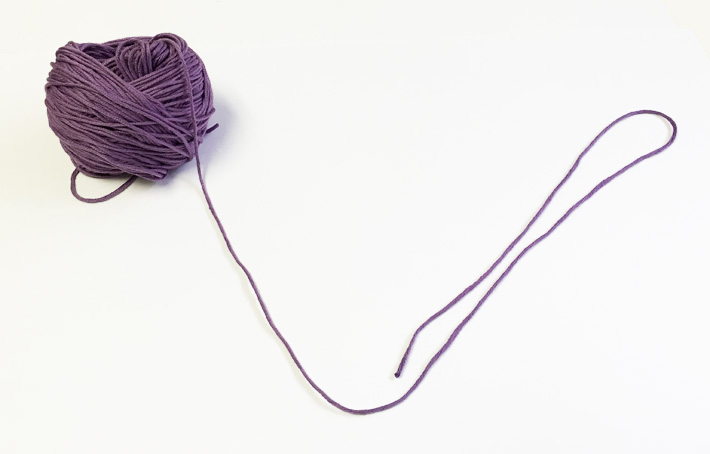 With the doubled yarn, create the slip knot as you would in the normal long-tail cast-on.

Hold the doubled-up yarn near the cut end of the yarn. Move your fingers back a few inches from the cut end so you will have a tail to weave into the finished work. 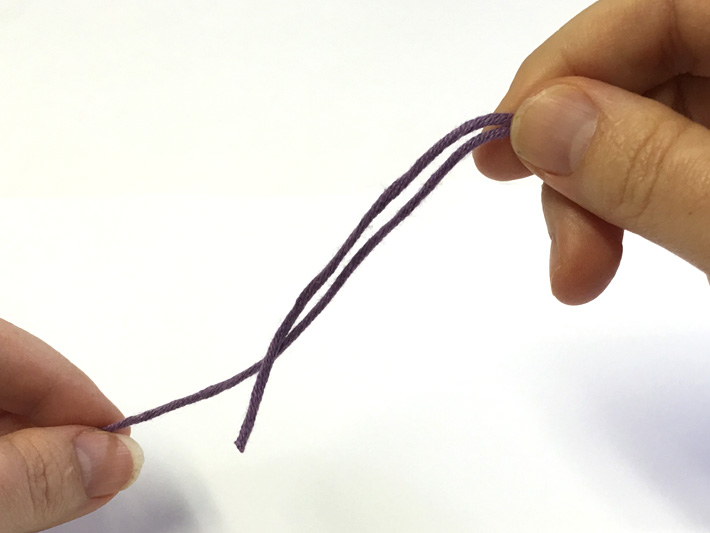 Create your slip knot on the right needle as usual, but make it with the double strand of yarn. There are many variations for incorporating this slip knot into your project that I discuss in the tips section below. 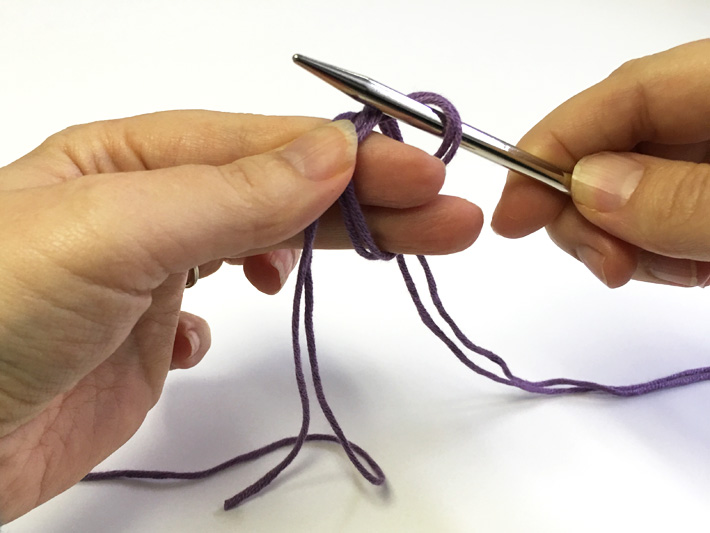 One difference between the Channel Island cast-on and long-tail cast-on is that the yarn tail is wound around the thumb twice counter-clockwise for the cast-on stitch.

Set your working yarn as usual over your index finger, but move your thumb to the right of the double yarn tail. 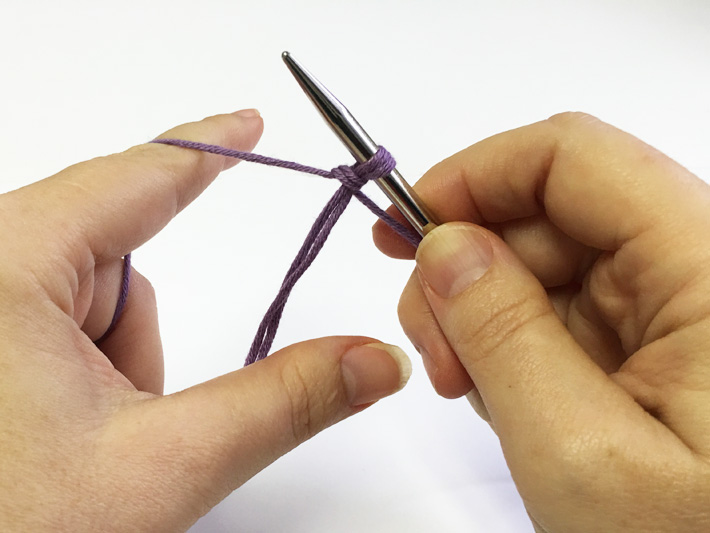 Now you are going to wrap the double strand counter-clockwise around your thumb twice. My preferred method is to twirl the thumb in a circle to wind the yarn because it keeps the action in one hand and leaves control of the right needle in the other hand. However, some knitters use the needle hand to wrap the yarn around their thumb.

Circle the thumb counter-clockwise, going under the yarn from the right and coming up on the left side of the yarn. That’s one loop. 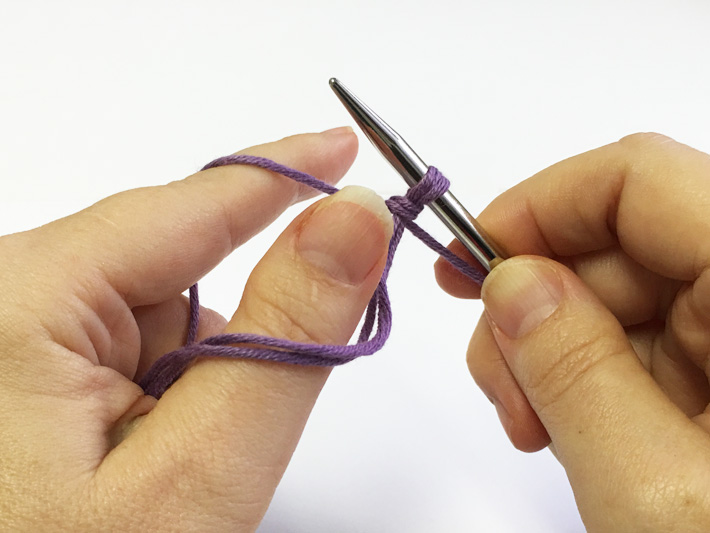 Keep going by circling the thumb counter-clockwise a second time so you have two loops and four strands of yarn on your thumb. For demonstration purposes, in the photo below I have shown the two loops of yarn separated, but for a smoother cast-on, you might want to place them closer together. 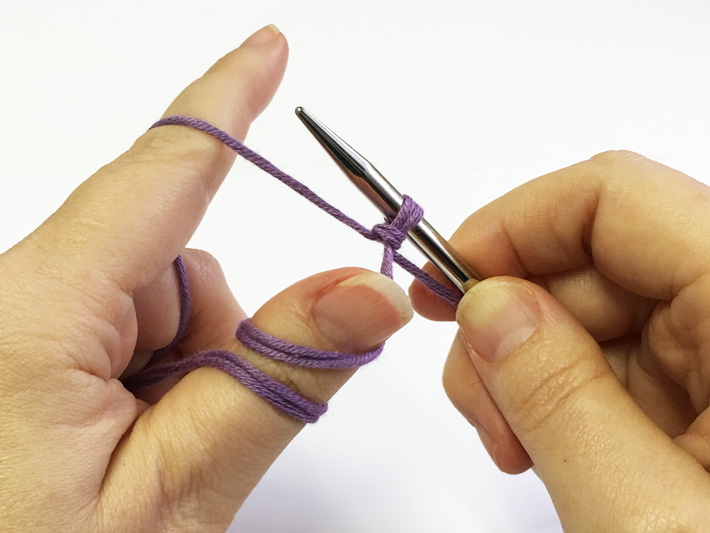 Now start the two stitch cast-on. The first stitch is the yarn over and the second is the knot. Some knitters prefer to do the yarn over before winding the yarn. I’ve tried both and I find I have better control of the yarn if I wind the yarn first and then do the yarn over. Try both and see what you prefer.

Holding the yarn steady, create a yarn over by moving the needle behind and under the working yarn so the stitch goes right to left over the needle. 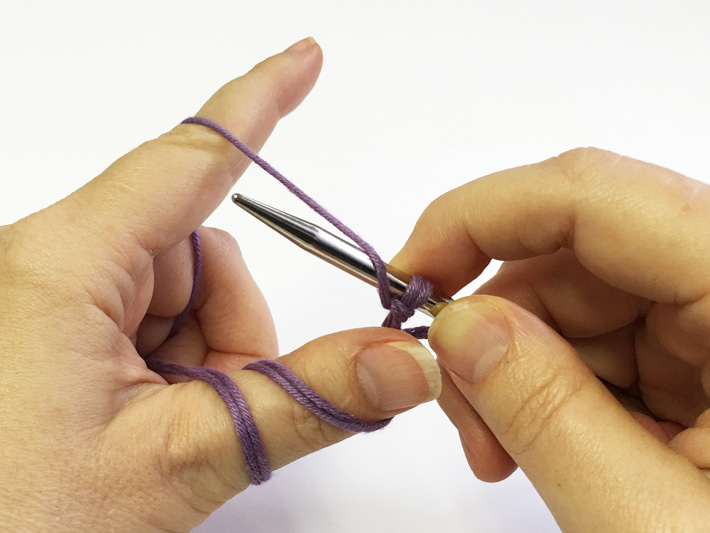 Then draw the needle back to your thumb and insert it under all the yarn strands at the ball of the thumb. 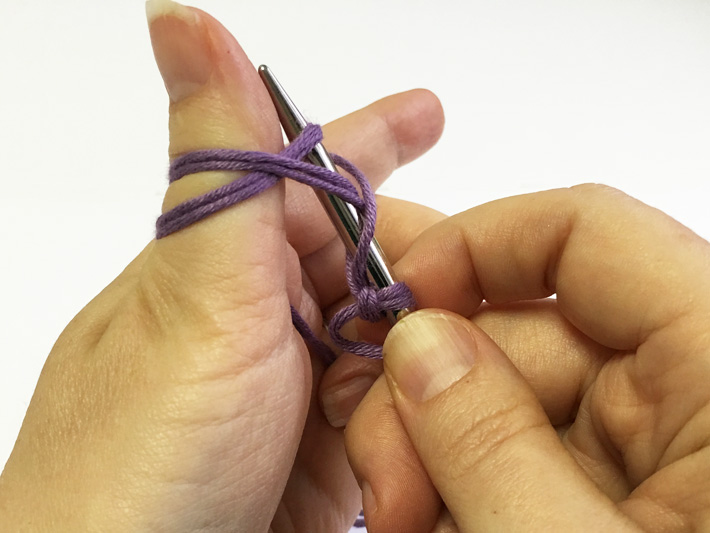 Then, just as you would with a long tail cast-on, bring the needle back and below the working yarn on your index finger. 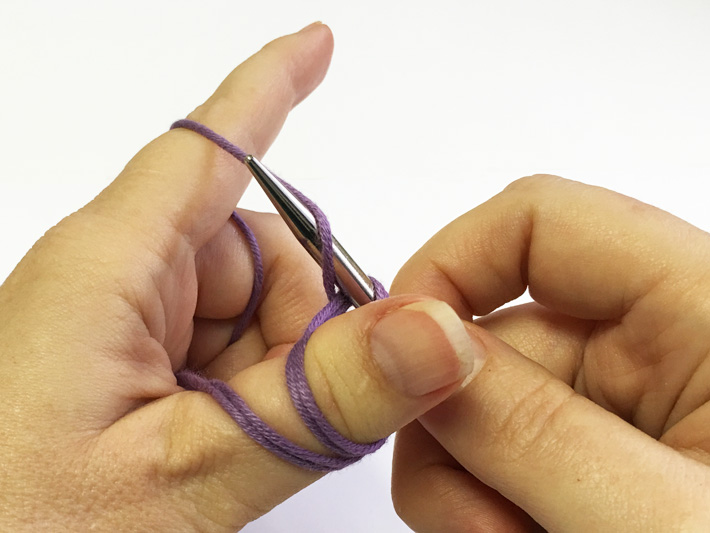 With the same movement as in a long tail cast-on, bring the needle back to the thumb and through the loop you created in the double strands. 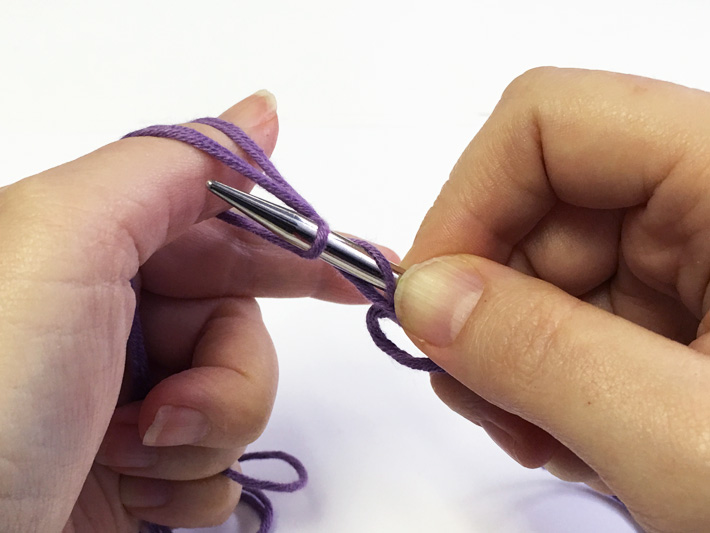 Release the yarn from your thumb and pull yarn to close up the loop and create your decorative knot. Don’t pull the yarn too tight — as with any cast-on, you want the yarn to slip easily on the needle. 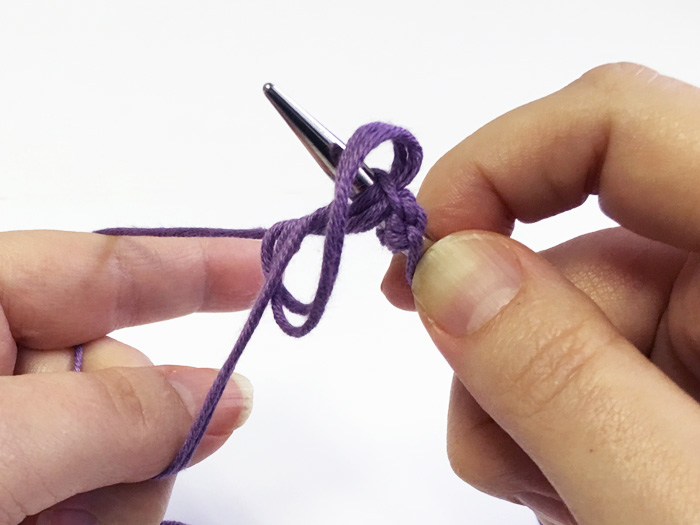 You now have a small decorative knot paired with a yarn over to the right. The yarn over will help the knot stand out. 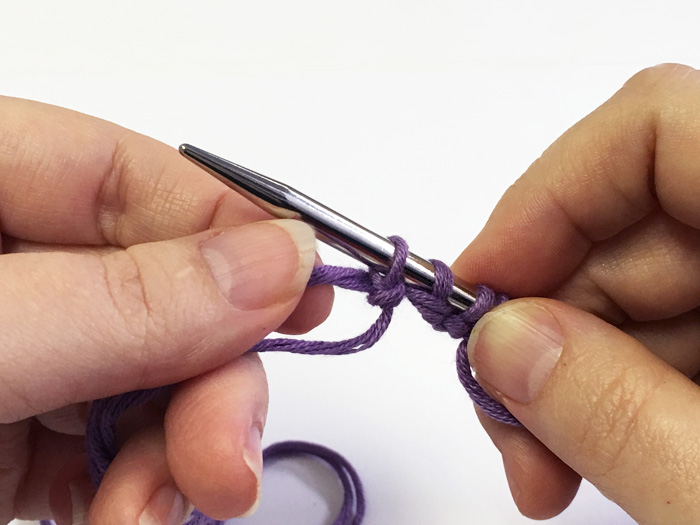 Continue to cast on until you have the number of stitches you need. Each yarn over and knot stitch count as two cast-on stitches. You can count the initial slip knot as one stitch, two stitches or not use it all (see the tips section below for variations).

Proceed with your pattern. Knit all your cast-on stitches, including yarn overs and knots, if you are knitting garter stitch. After a few rows, you will see your lovely edge taking shape.

Tips for the Channel Island cast-on

1. Knit both strands of the slip knot together when you are knitting the first row. The knitted slip knot will count as one extra stitch. This will give you an odd number of stitches.

2. Knit each strand of the slip knot. This will create two additional stitches and give you an even number of stitches. However, the first stitch pair will not include a decorative knot.

1. Tuck the cut end of the yarn in your right hand. It is easy to wind up with the cut end caught up in your cast-on if you don’t get it out of the way.

2. The double-strand tail has a tendency to move to the back and left after each cast-on. After you release the yarn and before you start the new pair, make sure to move the yarn back into the proper positions, with the tail to the right and the working yarn to the left.

3. Avoid ending the cast-on with the yarn over. The Channel Island cast-on creates an even number of stitches (not including the slip knot). If you need an odd number of cast-on stitches for your pattern, you can incorporate the slip knot as one stitch by knitting both strands together. Or you can create a selvage stitch after the yarn over by doing one regular long tail cast-on at the end of the row.

4. When planning your cast-on stitches, remember each pair is two stitches. One repetition of the Channel Island cast-on creates two stitches.

5. Be patient. This cast-on takes more time because of added steps of wrapping the yarn and adjusting the knot. But it is worth it for the beautiful edge!