When you’re starting out with calligraphy, you’ll encounter a few somewhat uncommon tools — the pen and nib. The truth is, we don’t regularly see people writing with true pen and ink, and that’s why what seems to be a simple part of the calligraphy process can be befuddling! 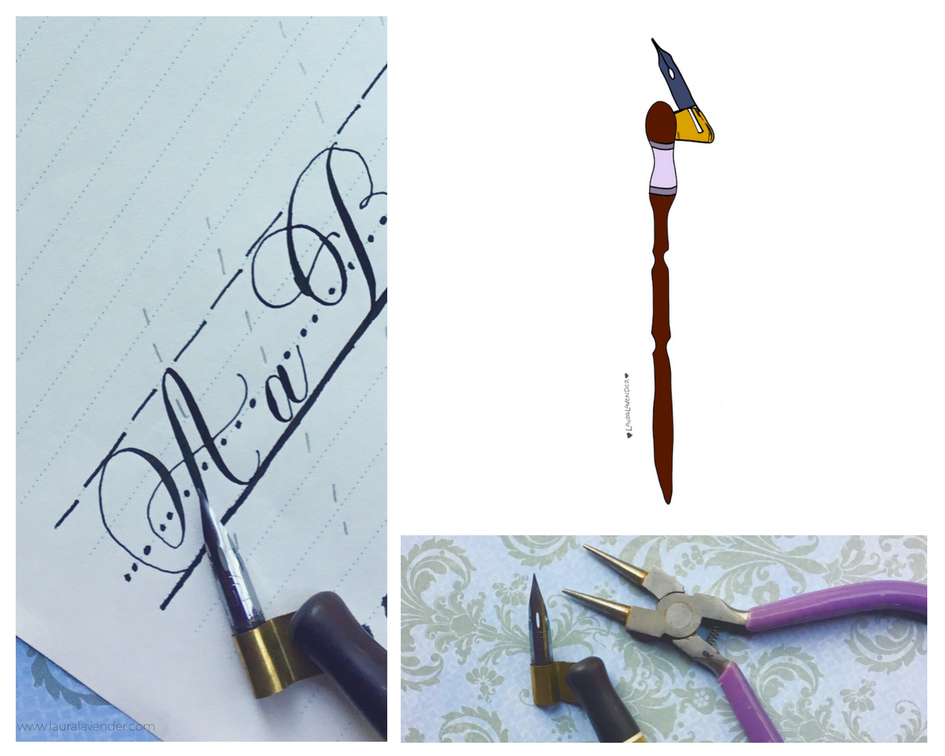 Today, I’ll shed some light on a common first-time calligrapher question: “How do I put my pen nib in the holder?”

In this post, I’ll focus primarily on pointed pen nibs and holders, but this information is also applicable for broad-edged nibs. 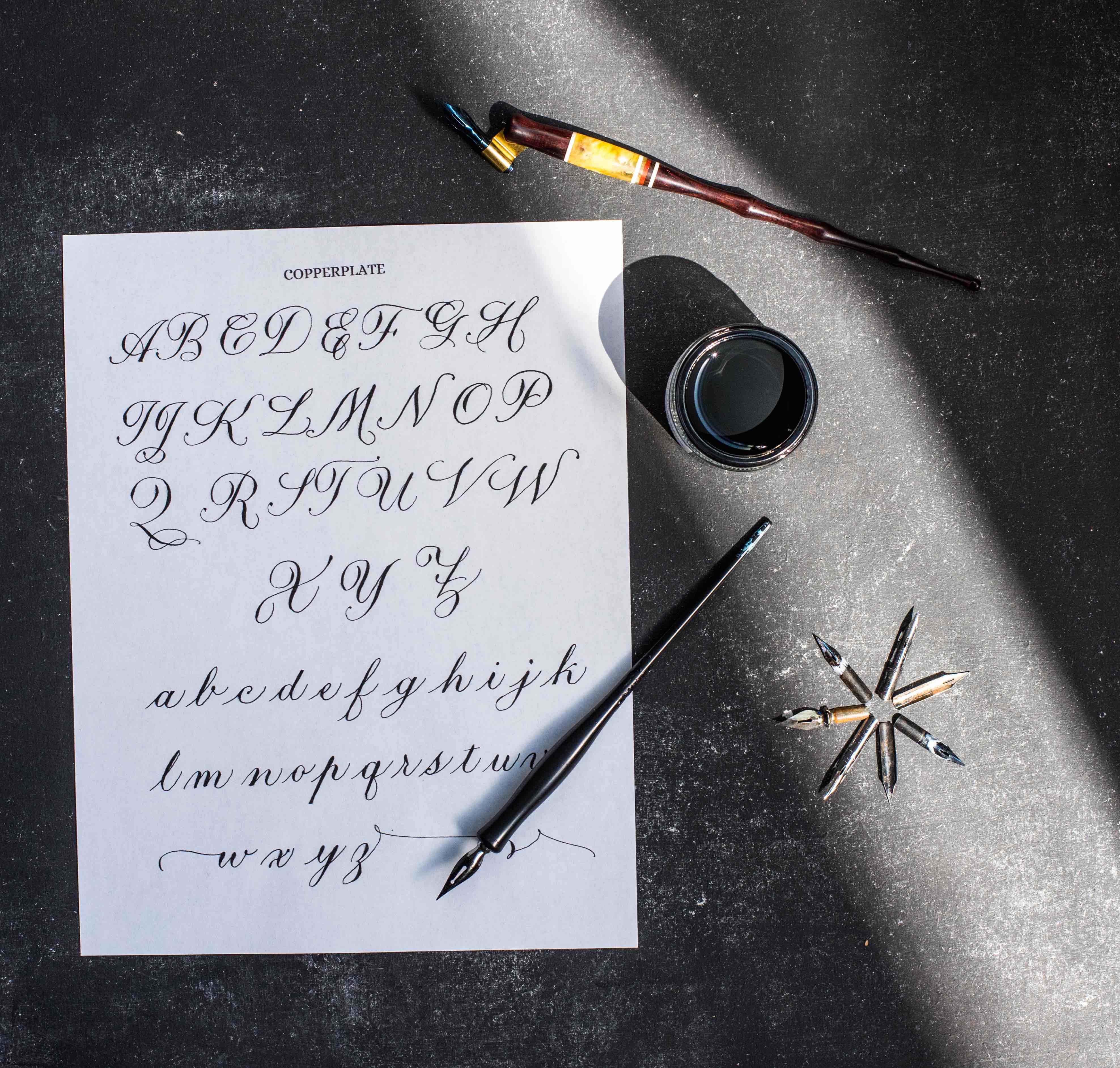 There are two main types of pen holders available to calligraphers:

The oblique pen holder facilitates writing your letters at the steep angle demanded by the copperplate & spencerian hands. (Oblique pen holders can also make calligraphy easier for left-handers — but thats for another blog post!) Here’s how to put your nibs into these two types of holders.

Keep this in mind!

Not all nibs fit all pen holders. Don’t damage your pen holder or break that vintage nib trying to put the two together.

With all pen holders, regardless of the style, the nib should be firmly held by the pen holder. However, it shouldn’t take brute strength or swear words to get your pen nibs and holders ready to go.

Here’s the key point: If you are breaking a sweat trying to get your nib in your pen holder, check again! 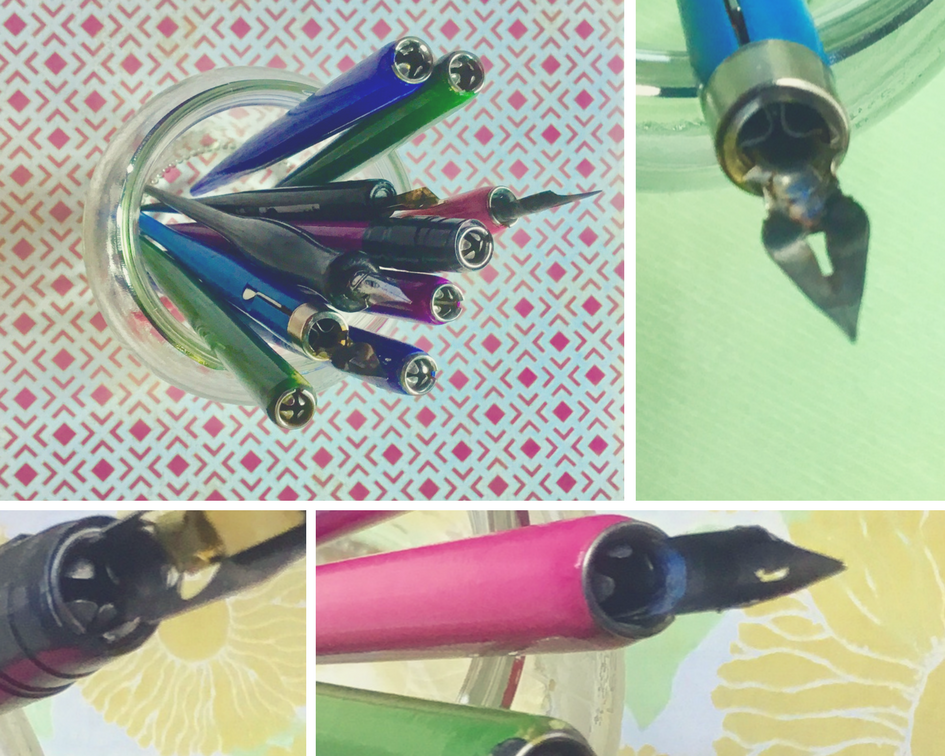 For a straight pen holder

Straight pen holders often have a claw-like mechanism, which is where the nib is inserted. Ensure the nib goes into the space at the back of the claws and the pen shaft — not into the center of the claws.

The vintage pen holder pictured below has a locking mechanism for keeping the nib in place. When the nib is inserted, the curved edged of the nib follows the curve of the pen holder. 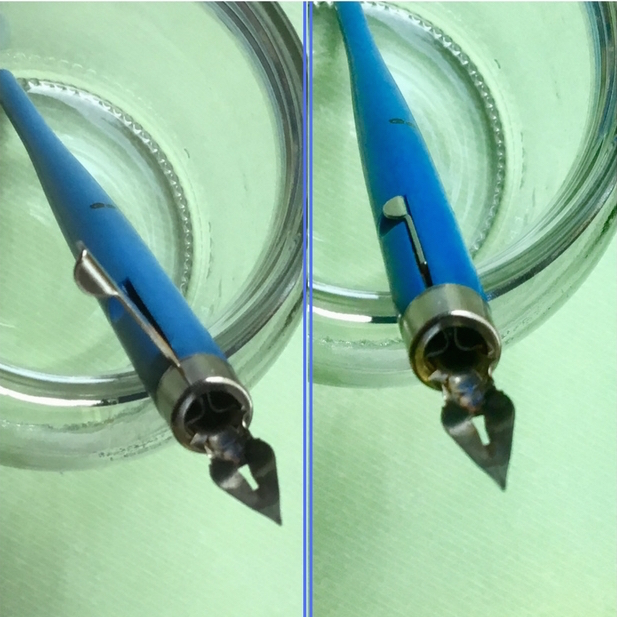 For an oblique pen holder 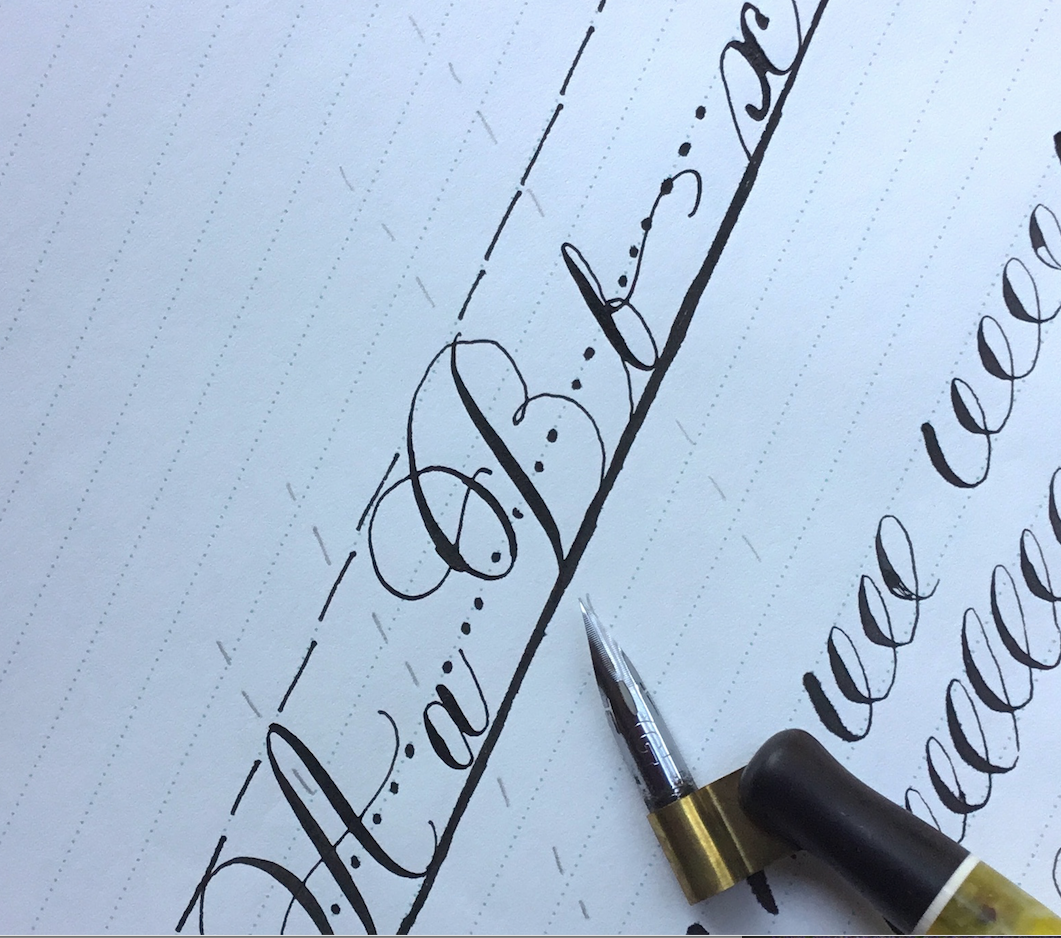 When using a solid plastic pen holder with a plastic flange, the pen nib should be inserted firmly into circular indentation for the nib. Once the nib is inserted into the indentation, move the pen nib slightly to the left or right inside the indention so the pen nib aligns with the slope of your letters.

Pen holders with a metal flange 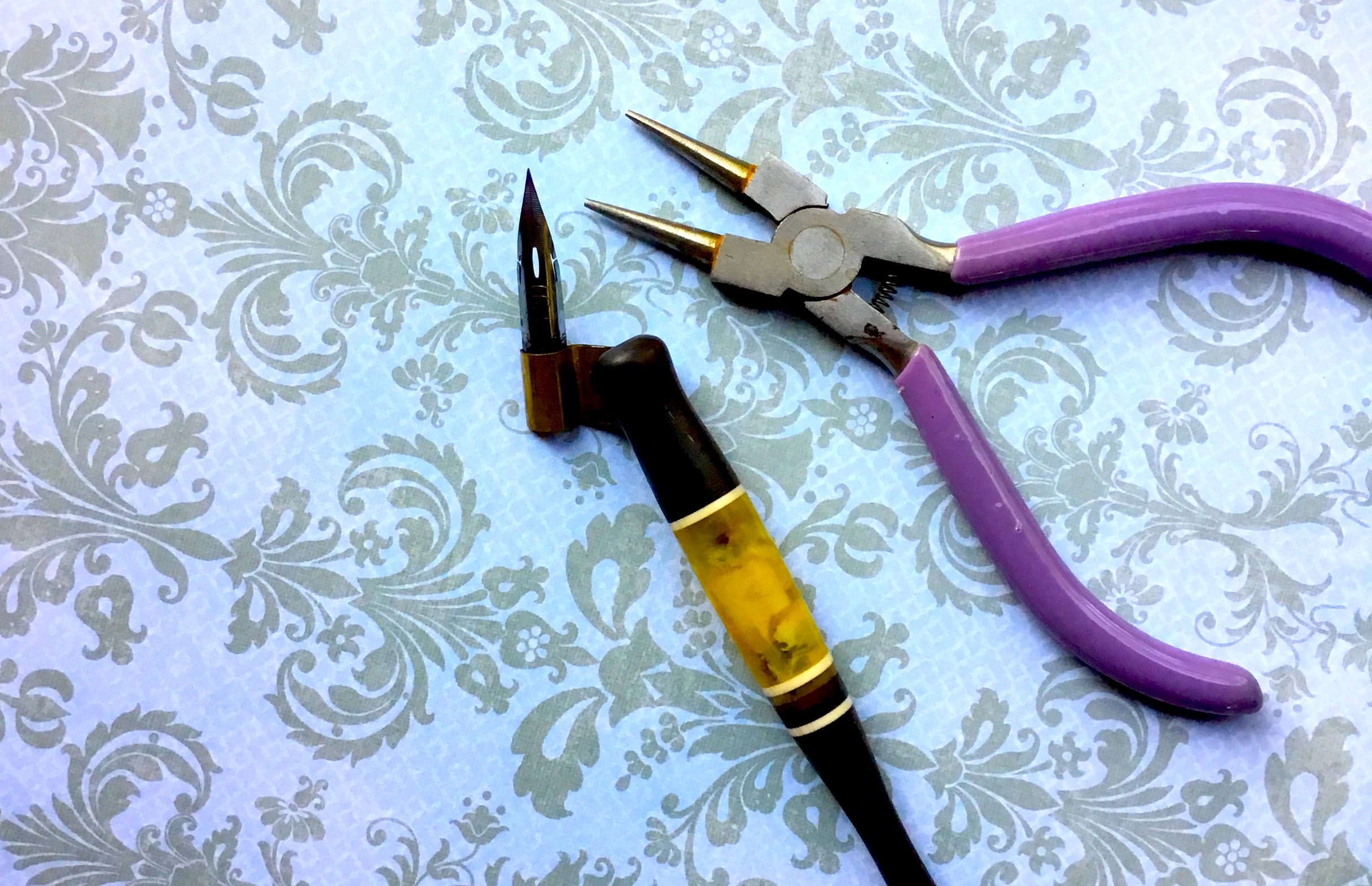 For pen holders with a metal flange, you’ll need a pair of small needle-nose pliers to properly adjust the flange to suit your pen nib.

The goal is to have the flange positioned so that the tines of the pen nib are aligned with the slope of the letters you are writing. Be gentle and go slow, testing your nib and pen holder as you go, until you have your perfectly individualized writing system. 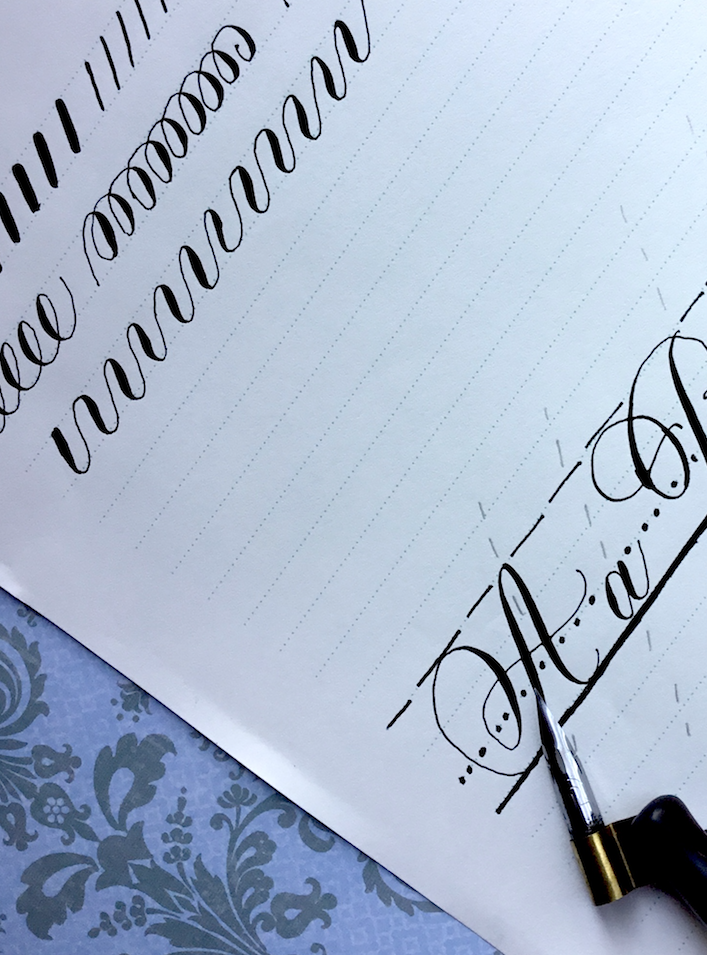 Sometimes, I think an illustration really does tell it best! I hope the below illustrations answers any lingering questions you may have on your pen nibs and holders. 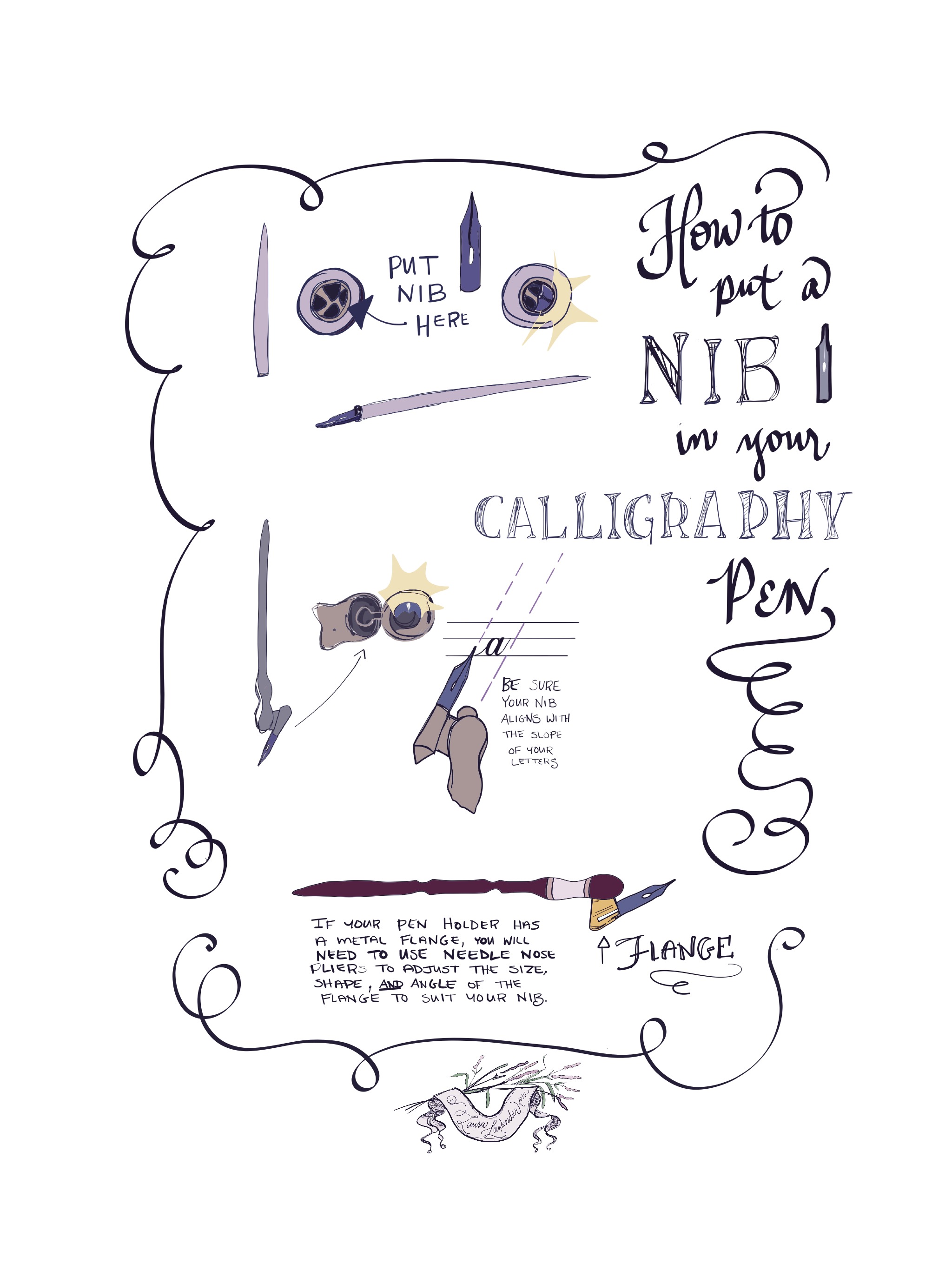