The holidays are upon us, and what better time to record and preserve all the tacky Christmas sweaters and Santa hats worn to our holiday parties?

I have been setting up photo booths for my parties for many years now and think that I have a pretty good system for photographers on a budget. Of course, it could be more complicated, more slick, faster, better and lighter — but then it wouldn’t be so cheap to put together! Here’s my take on what you need for a bare-bones, but awesome budget photo booth. 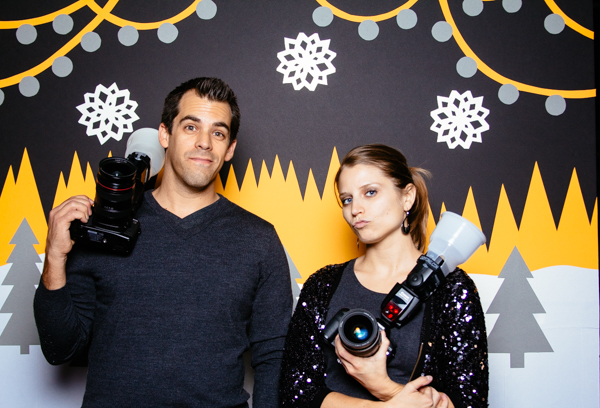 First, I put my DSLR on a tripod. I don’t use my main camera, but instead use an older, cheaper camera. This way if it gets knocked over or something happens, I’m not heartbroken about it. Photo booth images rarely get used for prints or high quality publication, so I’m OK with not having the highest of quality. Second, I set up a light stand right next to the tripod, so the light is right above the camera. I put the strobe on the light stand, with a white shoot-through umbrella. 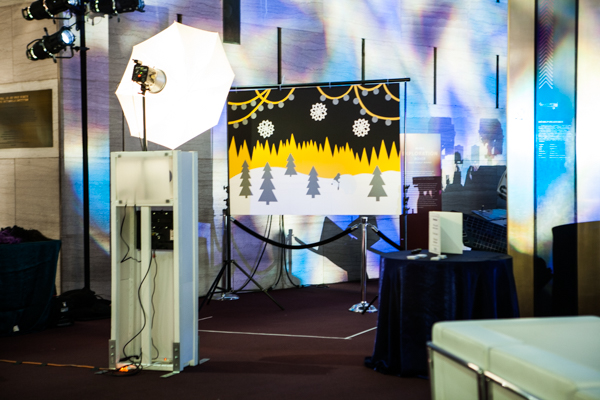 I use the modeling light on the strobe because it helps to light up the scene and gives the autofocus on my camera a little help. Many times, I’m setting up a photo booth in a dark place so a little light will go a long way when it comes to finding focus. If you choose to use a speedlight, it should still work but remember two things: you may need to change the batteries every 300-400 photos and you have to turn off the sleep mode so it stays on when it isn’t in use.

Put the TV or monitor nearby so guests can see it. Plug your camera into the monitor using standard definition RCA cables or high definition HDMI cables. You may need an adaptor depending on your camera. Use one radio trigger pair to connect the camera to the flash. Use another trigger as your shutter release, plugged into the shutter release port. Use the final trigger as the remote shutter release to be controlled either by you or buy the person taking the photo.

Test the setup by taking a photo. Ideally, one trigger should cause the shutter to release and the flash to fire at the same time. Shutter speed should be around 1/125 — slow enough for the flash to sync but fast enough to freeze any motion in the subjects. Aperture should be f/4 to f/5.6 — wide enough to let in some light but narrow enough that the depth of field keeps everyone in focus. Use your ISO to give your flash more power. Ideally, your flash should not be firing at full power so that it can recycle quickly, take many shots in a row and, if you are using a speedlight, to keep your batteries from draining quickly. Dial in your settings until you have it just right and keep the camera and flash set to manual so nothing changes.

Next, sit back and let the photo fun begin! Let me know how this works for you!

Has anyone tried to set up a DIY photo booth with success?