All maples are not the same. Let me tell you about bigleaf maple and why it is my favorite. From color to figure to working properties, it has a lot going for it. 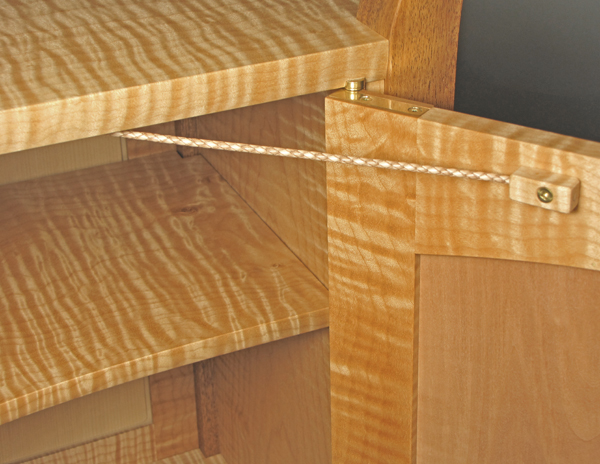 Which maple is it?

When choosing material for a woodworking project, the discerning woodworker will be aware of three general classifications of maple. Bigleaf maple is Acer macrophyllum, from the Pacific Northwestern United States, and is named for its super-size leaves that are often a foot or more in width. The wood is sometimes called Western maple or Oregon maple.

Hard maple, also called sugar maple, is Acer saccharum. This is indeed the hardest, strongest and densest of the maple woods, and, as its taxonomic name suggests, the tree gives us the sap from which most real maple syrup is made. The third maple, soft maple, is really a group of species, most commonly red maple, A. rubrum, and silver maple, A. saccharinum.

The density and hardness of bigleaf and the soft maples are about the same, similar to cherry, and at the workbench, noticeably easier to work than hard maple. For making a workbench, cutting board or baseball bat, hard maple is the prime choice, but the other maples are plenty strong and hard enough for virtually all furniture. So, let’s look at the other assets that bigleaf that make bigleaf special.

In the logs of most species, such as walnut or cherry, the annual rings of heartwood, which are more interior and darker, far outnumber those of sapwood, which are lighter and still actively conducting sap. In the maples, however, the sapwood predominates by far. Though every tree is unique, I generally find bigleaf sapwood to have a more invitingly warm, slightly amber tone, nicer than hard maple, which can sometimes look a bit cold to my eye, and soft maple, which too often has an undesirable faint grayish cast in areas of some boards.

The color of bigleaf looks wonderfully warm when finished with solvent-based varnish, as in the photo at the top of this post. Bigleaf is a fairly rapid growing tree when given space, and in the bigleaf maple lumber I’ve seen, the annual rings are usually wider than in the other maples, which seems to add to its inviting appearance.

Note: All of the photos in this post represent finished wood.

This is not to take anything away from the other maples, because all of this is a matter of personal preference. The key is to go past “maple” as just a single entity and appreciate the distinctions among these lovely gifts of nature.

The heartwood is especially generous in bigleaf maple, which produces some spectacular boards with a variety of warm pinkish and reddish brown colors. The board pictured below is an example that also contains beautiful curly figure.

Curly bigleaf is at its best, to my eye, with a broad ropy ripple that is wider than the classic tight fiddleback figure more common in hard maple. The curly figure is most prominent on the quartered and rift surfaces, diminishing on the flatsawn where a slight blister figure comes in. The photo below shows a fine example.

An amazing figure that presents strongly in bigleaf maple is quilt. The wildly undulating grain produces a three-dimensional effect that resembles a topographical map. This is knockout material from Mother Nature.

Bigleaf also spalts, as do all maples. Spalting is produced by fungi invading a log. As seen in the photo below, pronounced darker and lighter areas of wood result, with black demarcation lines between zones occupied by competing fungal species. It takes caution and luck to get great figure in spalted bigleaf without letting the process advance too far, resulting in spongy soft wood.

Nature supplies the trees but it takes a highly skilled and experienced sawyer to bring forth the potential in a log and then process the wood properly so woodworkers can build with it. Such an expert is Lewis Judy of Northwest Timber in Oregon, who, at one time or another, supplied all of the bigleaf maple I’ve used in this post and the photos of the curly and quilted pieces above.

A pleasure to work with

Bigleaf is easier to work with hand tools than hard maple. It also burns less with the table saw and router. Of course, finish surfacing figured wood requires appropriate strategies and sharp tools as with any species.

Shrinkage values are friendly too: 3.7% radial, 7.1% tangential, 11.6% volumetric, and a T/R of 1.9. These values make it somewhat more stable on paper than hard maple, and it is to me noticeably so in the shop. Its volumetric change is only a bit less than the soft maples but it does have less tendency to cup.

As for finishing, I prefer solvent-based varnish or shellac; waterbase doesn’t bring out the warmth. Gel varnish works well on figured wood to pop the figure without a producing a muddy look.

Bring out the character and texture of any woodworking project with the FREE Craftsy mini-class Flawless Finishing. Sign up today to enjoy high-definition video lessons and expert instruction from furniture maker Robert Spiece.

Have you used bigleaf maple? How would you compare it to the other maples?