Bread, glorious bread! There’s not much in life that’s better than a freshly baked loaf of homemade bread. The only downside? Before you get to carb-o-load, you have to spend a lot of time in the kitchen — including kneading, rising times, punching and proofing. It’s enough to make the less patient among us head straight to the bakery and skip the homemade part. 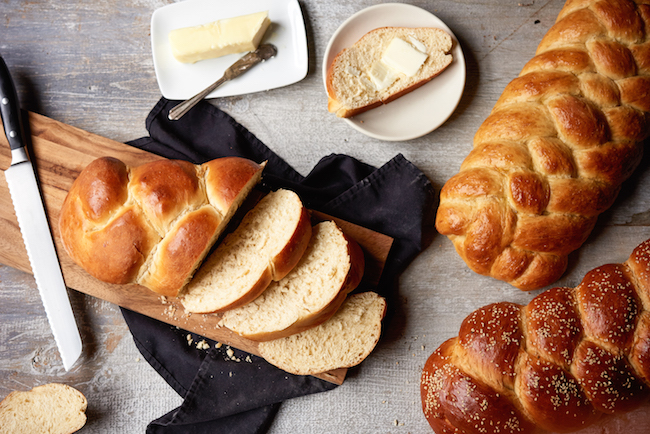 While good things do come to those who wait, it’s understandable that you might want to cut down on some of the bread-making prep time when possible.

You can bake it better than storebought.

These 8 tips offer easy solutions and tricks to hasten the process of making bread at home. 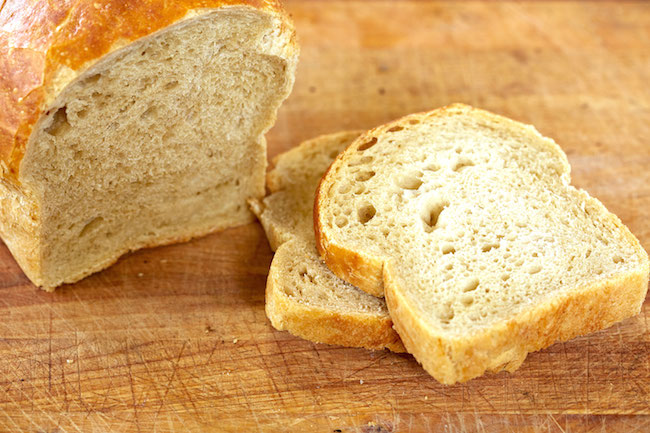 1. Take care when choosing a recipe.

One of the easiest ways to bake bread faster is to choose a recipe that takes less time. No, this isn’t a flippant tip! As you review recipes, you’ll find that the amount of time required for rising periods (and the number of rising periods) can vary quite a bit.

For example, bread recipes featuring an enriched dough (a dough made with milk, eggs or butter) require more time. The ingredients added to the dough slow down the rising process. Whole-grain bread doughs also typically require more time to rise and proof.

By reviewing the recipe first, you can avoid the ones that might require more time than you have.

2. In most cases, use room temperature ingredients.

When making bread, you’ll often be asked to use warm water or liquid to activate yeast. However, you don’t always get temperature specifications for the other ingredients.

Unless specifically noted, all other ingredients should be used at room temperature. Cold ingredients such as butter or milk into can slow the rising process, which can make the entire process of baking bread far longer.

There’s more than one type of yeast — make sure that you use the type called for in your recipe for best results.

If you don’t, you might inadvertently speed up the rising process just to have your bread collapse in the oven. Alternatively, your bread might take longer than advertised to rise.

Inactive yeast can also bring your bread baking to a halt. If you’re not sure how long that packet of yeast has been in your pantry, test it out before you bake.

Most bread recipes call for covering the dough and letting it rise “at room temperature” until doubled in size (or another visual cue). But what’s considered “room temperature” varies from kitchen to kitchen.

A warmer room temperature — say 75 to 85 F — helps your dough rise faster than if the room temperature is 65 F or so. However, before you pump up the heat, be warned: Some bread purists insist that a slightly lower temperature and longer rising time can result in a more full-bodied flavor in your finished loaf. 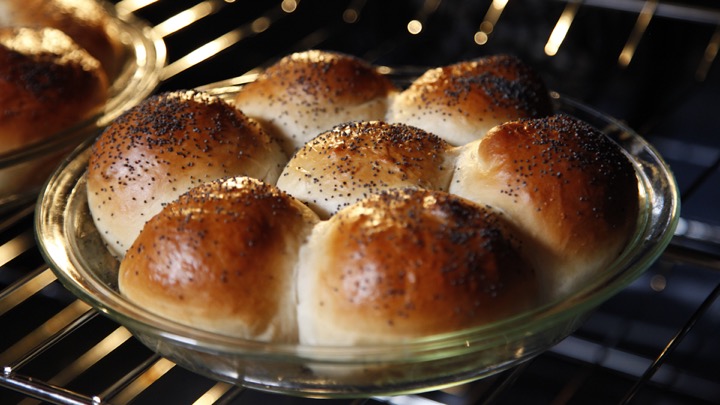 5. Speed up the rising in the oven.

Father Dominic Garramone, aka “The Bread Monk,” offers a clever solution if your kitchen isn’t warm enough to help your dough rise quickly.

In his book Baking Secrets from the Bread Monk, Garramone advises putting a pan of very hot water on the bottom shelf of your oven, and then placing your bread dough on a higher rack. The warm, moist air in the sealed oven helps the dough rise in record time.

For best results, monitor it through the oven window, if possible, rather than opening the door. Oh, and don’t forget to remove it before preheating the oven!

Apparently, old-time German bakers had a saying that went “a pinch of ginger speeds the yeast.” According to the same book mentioned above, adding 1/8 teaspoon of dried ginger to your initial yeast and liquid mixture can help it activate faster. Cinnamon can also have a similar effect. 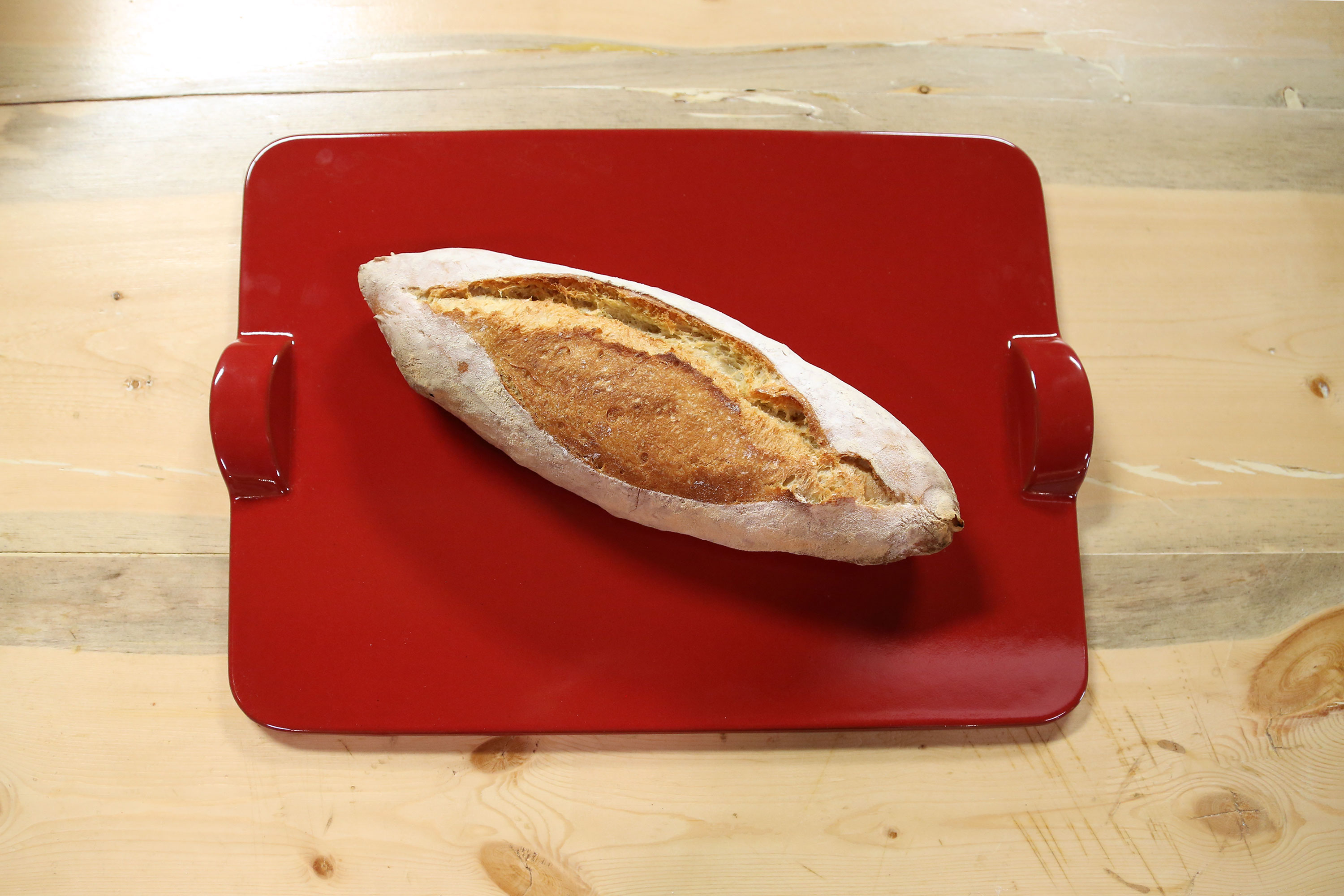 Want to shave a few minutes off of your baking time? Baking bread on top of a pre-heated bread or pizza stone can speed up the baking process by a few minutes.

Using a darker-hued baking pan can also help your bread brown more rapidly, but this doesn’t always mean that your bread will bake faster on the inside.

This is an anecdotal tip I’d like to share based on personal experience. It used to be that while waiting for the top of my bread to become golden, I would inadvertently over-bake the bread on the inside. I’ve found using an egg wash can help solve this!

Why so? The egg wash promotes browning on the top of your loaf of bread, which gives it an appetizing and slightly glossy finished look. This way, you can focus on the inner temperature of the baking bread rather than visual cues for doneness. 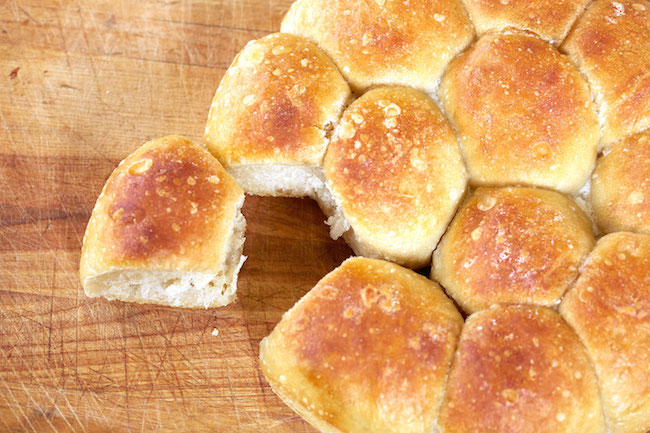 It’s a simple fact: Smaller portions of dough bake faster. If you want to hasten the baking process, you can divide your dough into smaller portions.

For instance, you might make demi-baguettes instead of full-sized ones, or soft brioche buns rather than a full-sized loaf of brioche. When those extra minutes count, this can make a big difference!

You can bake it better than storebought.